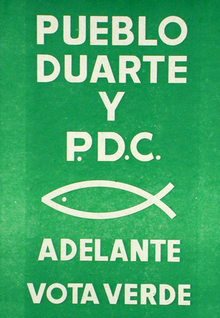 The Christian Democratic Party is the longest lasting of El Salvador's two leading parties. It was the left-of-center party while the Party of National Conciliation was right-of-center. With the rise of more socialist and communist parties in El Salvador, it became more of a centrist party. During the civil war, many leaders of the PDC who were more left-leaning were killed or disappeared, and the party moved to the right.

In 1989 Christian Democrat José Napoleón Duarte was the first Salvadoran president to democratically hand over power to a successor. The party's position has since shrunk with the rise of ARENA and FMLN.

However, since no party holds a majority in the legislature, it can be seen as effectively holding the balance of power. It often sides with ARENA and supported their effort to ratify the Central American Free Trade Agreement and pass a law supposedly aimed at fighting terrorism.

While the party was technically to be disbanded after the 2004 election, in which its candidate did not gather the necessary 3% of the vote, it was allowed to hold onto its registration by decree; this decree was declared unconstitutional on 30 April 2011, and the party was thus disbanded.[1]