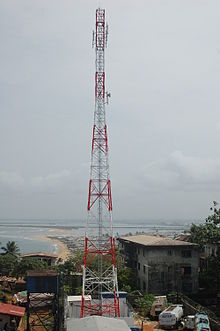 The main newspapers are:

The fixed line infrastructure of Liberia was nearly completely destroyed during the civil war. In 2006, the country had approximately 5,000 fixed lines installed, almost exclusively in the Monrovia area.[4] Prior to the passage of the Telecommunications Act of 2007, the state-owned Liberia Telecommunications Corporation (LIBTELCO) held a legal monopoly for all fixed line services in Liberia, and remains the sole licensed fixed line telephone service provider in the country. As of 2001 there was one television broadcast station plus four low-power repeaters,[7] while as of 1997 there were 70,000 television receivers.[5]

Internet services are currently limited to the Monrovia area. The Country code (Top-level domain) is LR.