Yie Ar Kung-Fu (イー・アル・カンフー, Ī Aru Kanfū?) is a 1985 arcade fighting game developed and published by Konami. It was considered by many gamers in Japan to be the basis for modern fighting games.[1] It pit the player against a variety of opponents, each with a unique appearance and fighting style.[2][3] The player could perform up to sixteen different moves,[4] using a combination of buttons and joystick movements while standing, crouching or jumping.[5]

Yie Ar Kung-Fu (Chinese: 一二功夫; pinyin: yī èr gōng fū; literally "One Two Kung Fu"; "Yie Ar" is pronounced "ee-ar") features the hero, Oolong (written 烏龍 Wūlóng, and ウーロン Ūron in Japanese), controlled by the player. Oolong must fight all the martial arts masters given by the game (eleven in the arcade version; five to thirteen in the home ports) unarmed to win the title of "Grand Master" and honor the memory of his father. On his side is a variety of punch and kick blows reachable by combining the joystick with one of the buttons (punch or kick). He also has the greatest jumping ability of all the game's fighters, with the exception of "Blues".

When a player gains an extra life, the word "xiè xiè" (Mandarin Chinese for "thank you") is heard. This is sometimes mistaken for the word "sushi"[who?]. 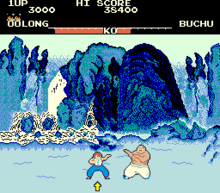 The martial arts masters are listed below (in fight order):

1 Buchu
Buchu is a big sumo wrestler who uses a leaping motion to land on Oolong with his body. Buchu may be big, but he's also slow. Buchu does not use weapons to fight. He is the first opponent in the first gauntlet and when gets hit in the crotch, his eyes bug out and the game says "nǐ hǎo" (which is Mandarin Chinese for "hi" or "hello").
2 Star
The first female opponent Oolong faces. Star is a young ninja girl in a pink outfit who uses shuriken to slow Oolong down along with fast punches and kicks.
3 Nuncha
Nuncha is a man in a yellow gi swinging nunchaku at Oolong in an effort to slow him down. According to an article at the "Hardcore Gaming 101" e-magazine (see "External links", below), his outfit and weapon are a homage to Bruce Lee's role in the movie Game of Death.
4 Pole
Pole is a short man who carries a large bo and uses it on Oolong. Pole also uses it to pole vault for extra momentum for his moves.
Feedle
Feedle is basically an endurance test for Oolong. Numerous enemies (or the same enemy who can replicate himself) attack from both sides of Oolong. In some ports, like the Commodore 64 one, he/they are absent.
5 Chain
Chain awaits Oolong at the start of the second gauntlet. (At the end of the first one in the Commodore 64 version.) He's a large man which swings a giant chain with a claw-like attachment at the end.
6 Club
Club is another large man that attacks Oolong. Club swings a giant spiked club (chúi) and bears a shield on his right arm to block most of Oolong's attacks.
7 Fan
Fan is another female warrior who wears a cheongsam and is more feminine than Star. Fan throws steel fans at Oolong like shuriken and attacks very fiercely. The fans fall in a feather-like pattern.
8 Sword
Sword is a dangerous warrior who comes ready to pounce on Oolong with a Dao and impressive aerial moves.
9 Tonfun
Tonfun is the final opponent Oolong must face before meeting his ultimate challenger, Blues. Tonfun attacks with two tonfa and fast-paced martial arts. Oolong has to time his attacks and hope that Tonfun makes a mistake to survive.
10 Blues
Blues is almost a mirror image of Oolong without a shirt on and can match him move for move. Oolong has to find some weakness on Blues to win. Since none of his clothes are blue, his name could be another Bruce Lee reference, based on his first name's pronunciation when said by a Japanese speaker. When Blues is defeated, Oolong is the winner and the game begins again with Buchu (in the BBC Micro version, Blues is replaced by a second round of Feedle).

Yie Ar Kung-Fu was subsequently widely ported to platforms including the MSX, NES, Commodore 64, ZX Spectrum, Amstrad CPC and BBC Micro. It was released on Xbox Live Arcade for the Xbox 360 on July 18, 2007 with updated graphics[6] and for the Nintendo DS in Konami Classics Series: Arcade Hits. In recent years, this game was re-released on some TV game products.

Yie Ar Kung-Fu was made available on Microsoft's Game Room service for its Xbox 360 console and for Windows-based PCs in July 2010.

A sequel, Yie Ar Kung-Fu II, was released a year later. The sequel was released only for home computers and was never ported to the arcades. Another fighting game by Konami titled Martial Champion was originally planned to be released as Yie Ar Kung-Fu 2. In fact, Jin, the protagonist of Martial Champion, was modeled after Lee, the protagonist of the NES and MSX versions, and after Ryu from Street Fighter II.

Characters in the NES and MSX port 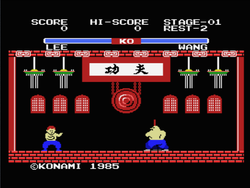 The MSX and NES port has many differences from its arcade counterpart. The hero is called Lee and faces only five opponents:

Wang
armed with a pole. Unlike Pole, he doesn't use his pole to gain momentum.
Tao
throws small fireballs in the same way as Star.
Chen
this port's version of Chain.
Lang
this port's version of Star, but with quicker shots and moves.
Wu/Mu
called Wu in the MSX and Mu in the NES, he is similar to Buchu (though Mu is white and seems bearded, while Buchu is black and has a shaven face). Once he is defeated, the challenge starts again with Wang.

After Chen's defeat, there is a bonus round where the hero must hit objects thrown at him to score points.

This version was relaunched for the Game Boy Color (as a part of Konami GB Collection Vol. 4), Saturn and PlayStation.

There are two hidden characters in the GBA game Konami Collector's Series: Arcade Advanced. To have access to them, the player must input the famous Konami Code at the title screen. The fighters are:

The characters are available in the special two-player mode found on this collection.