listen)) is a town in Aberdeenshire, Scotland. It lies on Scotland's northeast coast and had a population of 9,577 in 2001 census.

Stonehaven, county town of Kincardineshire, grew around an Iron Age fishing village, now the "Auld Toon" ("old town"), and expanded inland from the seaside. As late as the 16th century, old maps indicate the town was called Stonehyve or Stonehive.

The town is served by Stonehaven railway station.

Stonehaven is the site of prehistoric events as witnessed by finds at Fetteresso Castle and neolithic pottery excavations from the Spurryhillock area.[2] The town lies at the southern origin of the ancient Causey Mounth trackway, which was built on high ground to make passable this only available medieval route from coastal points south to Aberdeen. This ancient passage specifically connected the Bridge of Dee to Cowie Castle via the Portlethen Moss and the Stonehaven central plaza.[3] The route was that taken by the Earl Marischal and Marquess of Montrose when they led a Covenanter army of over 9000 men in the first battle of the Civil War in 1639.[4] Originally the settlement of Stonehaven grew and prospered and was known as Kilwhang. With 'Kil' meaning hill and 'whang' the name, or sound of a whip, possibly, the name is derived from the cliffs above the original settlement and the sound of wind whistling around their meagre shelters.

The Covenanters were imprisoned in Dunnottar Castle, where many died. A memorial to them can be found in Dunnottar Church. Other castles in the vicinity are Fetteresso Castle and Muchalls Castle, both of which are in private ownership and not open to the public. The oldest surviving structure in Stonehaven is the Stonehaven Tolbooth at the harbour, used as an early prison and now a museum.

Dunnottar Castle, perched atop a rocky outcrop, was home to the Keith family, and during the Scottish Wars of Independence, the Scottish Crown Jewels were hidden there. In 1296, King Edward I of England took the castle only for William Wallace to reclaim it in 1297, burning down the church in the process with the entire English garrison still in it. In 1650, Oliver Cromwell sacked the castle to find the Crown Jewels following an eight month siege (having previously destroyed the English Crown Jewels). However, just before the castle fell, the Crown Jewels were smuggled out by some ladies who took them by boat to a small church just down the coast in the village of Kinneff, where they remained undetected for eleven years.

Near the Cowie Bridge, at the north of Stonehaven, was a prior historic fishing village known as Cowie, which area has now been subsumed into Stonehaven. Somewhat further north are the ruins of Cowie Castle. Slightly to the west of Stonehaven is the ruined Ury House, originally a property of the Frasers.

The fossil of what is said to be the oldest air-breathing invertebrate discovered was found at Stonehaven's Cowie Beach. This was Pneumodesmus newmani, a species of millipede.[5][6] 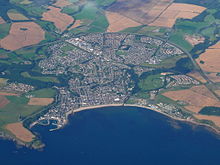 Stonehaven from the air

Stonehaven is 15 miles (24 km) south of Aberdeen in a sheltered position on Stonehaven Bay between the Carron Water and the Cowie Water.[7] Stonehaven lies adjacent to a deeply indented bay surrounded on three sides by higher land between Downie Point and Garron Point. The harbour, consisting of two basins, was improved in the 1820s by the engineer Robert Stevenson (grandfather of the author Robert Louis Stevenson) and became an important centre of the 19th century herring trade;[8] the harbour is bordered on the north by Bellman's Head and at the south by Downie Point. At the western edge of Stonehaven west of the A90 road lies the village of Kirkton of Fetteresso. Stonehaven is also the site of one of Europe's largest permanent and purpose built outdoor radio controlled car circuits (www.sdrcc.co.uk).

Stonehaven has grown rapidly since the oil boom in Aberdeen. The increasing demand for new, middle-class housing has seen four new estates being appended to the town, creating an expanse of suburbs.

Historically the chief commerce of Stonehaven lay in fishing. Led by the herring fishery, the catch peaked around the year 1894 with a peak catch of about 15 million fish per annum and an employment in the fishing industry of 1280 people. Due to overfishing to serve the expanding regional population, the fishing industry declined with diminishing catches, such that by 1939 only a remnant of the earlier fishing fleet continued to exist,[4] and the catch mostly supported the local population from that point onward.

At present day the town's primary industries are marine services and tourism, with Dunnottar Castle, a local landmark, bringing in a large number of tourists every year. Dunnottar Castle is regularly used in promotional material by the Scottish tourism industry; in addition, it was used in the 1990 movie Hamlet, and appeared as a featured desktop background in the UK edition of Micorosoft Windows 7.

The town has a long beach facing the cold North Sea, with large cliffs at either end sheltering small rock pools and inlets. It is also famous for its olympic-sized outdoor swimming pool, which is heated and filled with a mixture of tap water and filtered seawater. Another attraction is the local harbour, which features the Tolbooth, the town's tiny museum of local heritage. 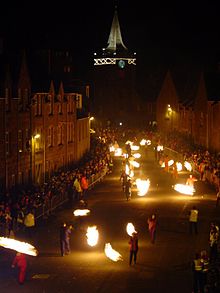 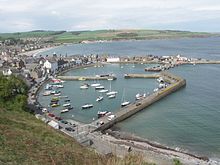 During Hogmanay festivities, the High Street comes alive with crowds watching the annual fireballs ceremony, in which volunteers walking down the High Street swing huge balls of fire around and around at the ends of chains. The Fireball Festival was part of the content of STV's Hogmanay coverage. The fireballs are finally thrown into the harbour.[12]

Every July Stonehaven holds a Highland Games. All those competing in the heavy events (which include the Hammer, the Heavy Stone and Tossing the Caber) must wear full Highland dress. Other events include the Stonehaven Folk Festival regularly attended by famous Glaswegian comedian Billy Connolly. On the first Saturday in June the Feein' Market recreates a 19th Century agricultural hiring fair. The RW Thomson Classic Car Rally is an annual celebration of the inventor of the pneumatic tyre and attracts an impressive range of vintage and classic cars. There are two harbour festivals each summer. A farmers market is now held once a month in the market square where local food suppliers and producers can sell fresh fruit, vegetables, poultry and other types of meat.

The town's Haven Fish Bar was the likely origin of the Deep-fried Mars Bar,[13] a snack now culturally associated with Scotland - and its health record - as a whole. The premises are now the award-winning Carron fish and chip shop.

Stonehaven, known informally to locals as Stoney, has three primary schools (Dunnottar, Arduthie and Mill O'Forest) and a large secondary school (Mackie Academy). Population expansion has led to the expansion of primary schools and extra spaces built for classrooms in the secondary school. The town supports a Rugby club - Mackie Academy Former Pupils Rugby Football Club - which plays in the BT National League Division 5. The town also has a junior football club who play in the North Region SuperLeague at Glenury Park.

Stonehaven's long established pipe band plays at events throughout the year, including the folks festival and fireball ceremony. The band has competed at various levels throughout its illustrious history including several years at the prestigious Grade 1.

Stonehaven has one of the largest purpose built radio controlled car circuits in the UK, located at the far end of Mineralwell Park. The track hosts some great driving of cars that reach 60mph

Stonehaven was the birthplace of Robert William Thomson, inventor of the pneumatic tyre and the fountain pen, of journalist James Murdoch and Lord Reith of Stonehaven, first Director-General of the BBC.

Stonehaven was a holiday retreat of the poet, Robert Burns.

The novelist Lewis Grassic Gibbon (James Leslie Mitchell) attended school at what was the old Mackie Academy (now Arduthie Primary). As a state secondary school, Mackie Academy now serves over 1000 pupils and they study his work.

Stonehaven has a Local Community Radio Station, Mearns FM. Broadcasting from Stonehaven Town Hall to the town and surrounding area, the station aims to help keep Stonehaven, Inverbervie and Laurencekirk up to date with local and charity events, as well as playing music. Staffed completely by volunteers, it is run as a not-for-profit organisation, broadcasting under a community radio licence, with a remit to provide locally-focused news, events and programming. Jointly funded by local adverts and local and national grants, Mearns FM has one of the largest listening areas of any community radio station owing to the Mearns' distributed population.[14]