The Rio de Janeiro Metro (Portuguese: Metrô Rio, commonly called Metrô) is a mass-transit underground railway network that serves the city of Rio de Janeiro, Brazil. Founded in 1979 with five stations operating on one line, it now covers 47 km (29 mi) divided into two lines and 35 stations. It is the second largest metro system in Brazil after the São Paulo Metro.

The system currently consists of two lines, with another under construction:

The Government of the State of Rio de Janeiro remains responsible for the expansion of metro network, through Rio Trilhos. In late December 2007, the lease was renewed until 2038 and Metro Rio assumed responsibility for the construction of Cidade Nova station, which will serve as a link between Line 2 to Line 1, ending the need to transfer Stations for the purchase of 114 cars and construction of Uruguai station, expanding Line 1 further north.

The extension works of Line 2, called Line 1A, which ended the transfer at Estácio Station and allow the direct connection from Pavuna to Botafogo were started by Metrô Rio on November 13, 2008 and the tracks were completed in December 2009. With the extension, the 250 thousand passengers that circulate daily on Line 2 don't need to change trains any more in order to get to the South Region. The interconnection of the two metro lines will reduce, by up to 13 minutes, the journey time from Pavuna Station to the city's Downtown, the destination of 83% of Line 2's passengers.

The Pavuna-Botafogo Direct Connection will be made available by means of the construction of a viaduct, with 1.3 km (0.8 mi) of extension, connecting São Cristóvão Station to Cidade Nova Station, which will be built on land located in front of Rio's Mayor's office, on the other side of Presidente Vargas Avenue.[1]

Rio de Janeiro is the second largest city of Brazil and the most important tourist attraction of the country. After 1950, the number of motor vehicles on the roads increased dramatically. Rio de Janeiro is situated in a hilly region, between the mountains and the Atlantic Ocean. The landscape of the city is extremely uneven, making traveling by car or bus a very time-consuming task through the narrow streets, which were ideal for tram but not for the increasing traffic of motor vehicles. By the early 1960s, traffic jams, pollution, and smog had become a serious problem in the city. To overcome these problems, local transport authorities decided to massively reduce the tram network and switch over to a metro network.

On December 14, 1968,[2] the Companhia do Metropolitano do Rio de Janeiro (Metro Company of Rio de Janeiro in English) was created by State Law number: 1736. In March 1975, with Law–Decree number: 25, the company effectively came into existence. On June 23, 1970, construction work started in Jardim da Glória. From 1971 to 1974, due to lack of resources, construction work stopped and was only resumed a year later. The Rio de Janeiro Metro began operating in March 1979, during the administration of governor Chagas Freitas. In the beginning, there were only five stations: Praça Onze (Eleven Square), Central, Presidente Vargas, Cinelândia, and Glória, operating from 9:00 AM to 3:00 PM.

In the first 10 days, the system transported more than half a million people, averaging sixty thousand passengers per day. At that time, the subway worked with only four trains of four cars each, with an average interval of eight minutes. In December of the same year, the operating schedule was extended until 11:00 PM, including Saturdays. In 1980, the metro system began to be expanded with the opening of Uruguaiana and Estácio stations. The two new stations caused larger passenger demand, compelling an increase in the number of trains from four to six.

The Carioca station in the Downtown Rio de Janeiro, the most active station with more than eighty thousand passengers a day, was finished in January 1981. By the end of the same year, the stations Catete, Morro Azul (now called Flamengo), and Botafogo were completed. In November 1981, Line 2 (or Linha 2 in Portuguese) started operating with only two stations: São Cristóvão and Maracanã (which serves the Maracanã football stadium). In December, completing the southern section of the first Line 1, Largo do Machado station began service. In 1982, the complementary inaugurations of the northern section of Line 1 started, with the beginning of operations of the Afonso Pena, São Francisco Xavier and Saens Peña stations.

To allow the completion of the second line to Irajá, in 1983, the trains on this line began operating from 6:00 AM to 2:00 PM. After a month, this schedule was extended until 8 PM, and a free bus service was established, integrating the Estácio, São Cristóvão, and Maracanã stations. After the conclusion of the works, the Pre-Metro and Maria da Graça, Del Castilho, Inhaúma and Irajá stations were opened. In 1984 the commercial operation of the second line began with five trains on work days with a five-and-a-half-minute interval during the week.

Following the expansion, the Triagem station was inaugurated in July 1988, the year of the creation of the subway/train integration ticket. In 1991, the Engenho da Rainha station was inaugurated. From 1991 to 1996, two stations were opened, Tomás Coelho and Vicente de Carvalho. In this period, the time interval of the nine stations of the second line was reduced to six minutes. In July 1998, Cardeal Arcoverde station, in the traditional neighborhood of Copacabana, was inaugurated. Five more stations became operational in the following two months: Irajá, Colégio, Coelho Neto, Engenheiro Rubens Paiva, Acari/Fazenda Botafogo and Pavuna.

In 1997, the Carnival Operation (Operação de Carnaval in Portuguese) began with continuous service during the Rio Carnival festivity days. In December of that year the system was privatised and the management and operation of the company passed into the hands of the Consortium Opportrans with a concession for 20 years, leaving the responsibility for expansion of the network in the hands of the state government of Rio de Janeiro through company Rio Trilhos. The Rio Reveillón is highlighted by the performance of Opportrans that since 1999 conducted a Special Operation to ensure a party for all. Tickets illustrated scheduled appointments to avoid overcrowding and provide the best service.

In 2003 Siqueira Campos station in Copacabana was inaugurated. Cantagalo station beyond Siqueira Campos was due to be completed in March 2006 but due to financial problems the opening date was postponed to December 15.[3] This was again postponed and the final opening took place in February 2007. At the same time construction began on the subway extension to General Osório station in Ipanema. This was opened in December 2009.

In late December 2007, Metro Rio renewed the concession for another 20 years to 2038, with the counterparts a number of improvements announced in early 2008 with a plan to expand the subway network and other improvements in the system: the project Metro Century.

Line 1A from Pavuna to Botafogo opened in December 2009 with a connection between São Cristóvão and Central. Passenger traffic at Estácio is reduced and the elimination of the need to transfer betweens lines 1 and 2 saves up to 13 minutes of journey time. A new station, Cidade Nova, was opened in November 2010 on Avenida Presidente Vargas on the new section[4]. The station is on Avenida Presidente Vargas and serves the City Hall.

In June 2010, the construction of Line 4 began, linking Ipanema to Barra da Tijuca, where most of 2016 Olympic Games events will occur. 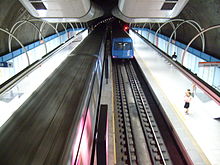 Inside each coach, seat arrangement is both horizontal and vertical. When left side has horizontal (parallel to window) seats, right side has vertical (right-angle to window) seats, and vice versa. Each vertical seat has handle for easier standing, and backside facing. There are vertical rods from ceiling to floor for standing passengers, one set in front of horizontal seats, another set at middle of the coach. Both A and B type trains are air-conditioned. 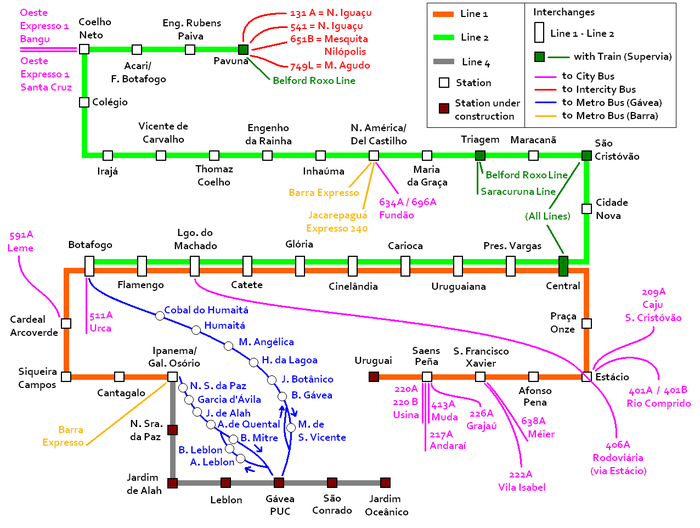 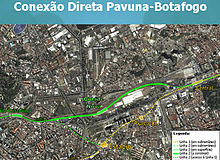 Satellite view of the direct conexion of Pavuna-Botafogo.

All stations are underground. Cinelândia & Central stations have island platforms. Carioca, Saens Peña, Botafogo and General Osório stations has both side and island platforms, although Saens Peña consists of two island platforms and three tracks. The northernmost of the three tracks appears to be disused and planned for use after the Line 1 extension. Saens Peña is a very busy station, with train turnarounds made very quickly. All other stations have side platforms, up and down tracks are divided by a low wall at stations with side platforms. Siqueira Campos, Carioca, Central, Uruguaiana & Cardeal Arcoverde have a large mezzanine floor between surface and underground tracks.

Central, which is a major interchange point between the Metro, local and longer-distance bus lines, and the Supervia suburban electric rail network, is the busiest station of the network. Cardeal Arcoverde is the most beautiful station; platform area has been dynamited out of the base of São João Mountain and maintains a cave-like structure. General Osório have some painting on the hallways to remember prehistoric attempts to communication.

The Line 1A is actually the extension of Line 2 until Botafogo station. The Line 2 is elevated from Irajá to Colégio. Many of them have island platforms, although Pavuna has both side and island platforms. Underground from Central to Botafogo.

For its origin as light rail, it is fully over ground (except Estácio station, which is underground). Most stations like Irajá and others, has an island platform, whereas some stations like Triagem has side platforms. Maracanã station is directly linked by an overbridge to one of world's largest football stadiums, Maracanã Stadium, crossing the road. 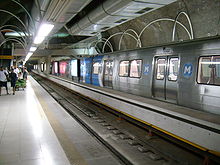 Tickets are purchased from a cashier in a booth; no automated ticket vending machines are in stations. There is an ongoing campaign to change the old tickets (paper magnetic strip) until December 30, 2009.

The investment of R$ 1.15 billion contemplates also the purchase of 19 additional compositions: there will be 114 new cars with a technology that allows the passengers to circulate inside the train. The first of the new compositions arrives in December 2010 and the others will start operating gradually until December 2011. All of them will ride in Line 2 and will have a dimensioned air conditioning system to bear the sun and heat's direct incidence, as most part of the line is in the surface. With the increase of 63% of the fleet, the concessionaire will also standardize the compositions of Lines 1 and 2: all 49 trains will have six cars.

The control, signalization, ventilation and energy systems will be also expanded and modernized. The energy supply for the metro's operation will be reinforced with two new proper sub-stations, at Uruguaiana and Largo do Machado Stations, and with the remodeling of São Cristóvão and Central sub-stations. On the other hand, the signalization will be automated in the two lines. Metrô Rio will enhance the ventilation at the stations and will modernize all equipment of the Control and Operations Center, from where the complete daily operation is monitored. These actions, combined with the extension of Line 2, Will allow Metrô Rio to transport more than 1.1 million passengers/day.[5]

The construction of Pavuna-Botafogo Direct Connection is also part of an investment package of R$ 1.15 billion undertaken by Metrô Rio, as of the renew of the concession contract with the Government of the State of Rio de Janeiro in December 2007. Entitled 21st Century Metro, the project, which also includes the expansion of Line 1 and other enhancements, will allow to more than double the Rio's subway capacity, from 600 thousand passengers/day to more than 1.1 million passengers/day. The extension of Line 1 will start as of 2012, with the recovery works of 1 km (0.6 mi) of via from Tijuca's tail, which goes from Saens Peña square until the corner of Rua Conde the Bonfim with Rua Uruguai, where Uruguai Station will be built. It is forecast that the expansion of Line 1 is completed until 2014, the year of 2014 FIFA World Cup in Brazil.[6]