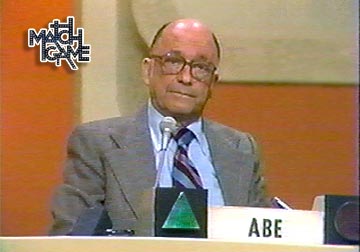 Abe Burrows (, &ndash; , ), was an American humorist, author, and director for and the stage.

Born Abram Solman Borowitz in , Burrows graduated New Utrecht High School in Brooklyn and later attended both City College and New York University. He began working as a runner on Wall Street while at NYU, and he also worked in an accounting firm. After he met Frank Galen in 1938, the two wrote and sold jokes to an impressionist who appeared on the radio program.

His radio career gained strength when he collaborated with , the writer and star of radio legend "". The two created the successful series after Gardner's character, Archie, premiered on the earlier radio program, "This Is New York". Burrows was made the show's head writer in 1941, and he credited the experience with investing the Runyonesque street characters he fashioned for "". "The people on that show," Burrows once said about "Duffy's Tavern", "were New York mugs, nice mugs, sweet mugs, and like (Damon) Runyon's mugs they all talked like ladies and gentlemen. That's how we treated the characters in "Guys and Dolls"."

Meanwhile, he became a popular guest on the Hollywood party circuit, performing his own satirical songs ("Darling Why Shouldn't You Look Well Fed, ‘ Cause You Ate Up a Hunka My Heart?" and "The Girl with the Three Blue Eyes"). Such informal performances led to a nightclub act and regular appearances as a performer on CBS radio programs, eventually hosting his own , "The Abe Burrows Show" () in 1948, a 15-minute weekly comedy Burrows wrote and directed as well. As he recalled years later, his show came about while he was scripting a radio show for when asked him, "When the hell are you gonna become a professional?" Burrows continued as Davis's head writer while doing his own show.

Mixing comic patter ("I guess I could tell you exactly what I look like, but I think that's a lousy thing to say about a guy") with his clever comic songs, "The Abe Burrows Show" was popular with listeners and critics but not with its sponsor, Lambert Pharmaceutical, then the makers of mouthwash but promoting a Listerine on the show. Lambert, according to Burrows, complained that the show wasn't selling much of the toothpaste. "It seems that my fans were being naughty," he wrote. "While they were laughing at my jokes, they were sneering at my toothpaste."

From radio to Broadway

Both shows originated from CBS's affiliate, KNX, whose program director Ernie Martin encouraged Burrows---who had done some film work---to think about writing plays. "I told him I felt my funny stuff was okay for radio, but I didn't think people would pay theater prices to hear it," Burrows recalled. Burrows credited his success in the theatre to his work under the theatre legend George S. Kaufman. In the Kaufman biography by Howard Teichmann . Burrows is quoted as saying that what he said ( as a director - to his cast ), was what he heard Kaufman say in their collaboration on Guys and Dolls.

Burrows also became a famous script doctor, enough so that the desperate call of a producer, "Get me Abe Burrows!", remained Broadway shorthand for a script that needs repair for many years. Yet Burrows himself downplayed that role in his memoir, while discussing his fixing of "Make a Wish"::I have... performed surgery on a few shows, but not as many as I'm given credit for. I've been involved in 19 theatrical productions, plus their road company offshoots. Only a few of these have been surgical patients. And I don't usually talk about them. I feel that a fellow who doctors a show should have the same ethical approach that a plastic surgeon has. It wouldn't be very nice if a plastic surgeon were walking down the street with you, and a beautiful girl approached. And you say, "What a beautiful girl." And the plastic surgeon says, "She was a patient of mine. You should have seen her before I fixed her nose." Doctoring seldom cures a show. The sickness usually starts at the moment the author puts the first sheet of paper in his typewriter. All the redirecting and recasting can never help much if the basic story is wrong.

Twice married and the father of one son and a daughter, Burrows's son, , became an influential whose credits have included "" and "" -- the latter a show the younger Burrows helped create as well, a show whose setting of a neighborhood bar populated with quirky locals was a direct descendant of the radio show that helped launch his father's distinguished career.

In 1980, Burrows published his memoir, "Honest, Abe: Is There Really No Business Like Show Business?", in which he recalled the meat of his career, including his mentoring of several comedy writers including future "M*A*S*H" writer (who was once a "Duffy's Tavern" writer), , and , the latter a distant cousin of Burrows's. He died after a battle against in 1985.