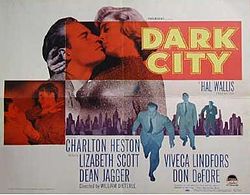 Dark City is a 1950 film noir. The casting of Charlton Heston—in his first Hollywood film appearance[1]—as a petty hood is unusual in light of his subsequent career. The film also features Jack Webb and Harry Morgan, who both went on to co-star in Dragnet. The musical score was composed by Franz Waxman.[2]

A group of hustlers take a man for $5000 in a poker game. When the man ends up killing himself, the heat is put on the gamblers in the game. The dead man's vengeful brother begins picking off the gamblers one by one.

The working title of this film was No Escape. Production Dates: 5 Apr--12 May 1950. Additonal scenes and retakes, 9 May, 11 May 1950 Scenes were shot at the following Los Angeles area locations: Griffith Park Observatory, Union Station, North Hollywood, an amusement pier in Ocean Park, the Wilshire Plaza Hotel and the Valley Vista Motel on Ventura Blvd. in the San Fernando Valley, CA. In addition, background shots were filmed in Las Vegas, NV and Chicago, IL.