Korçë (Definite Albanian form: Korça, other names see below) is a city in southeastern Albania and the capital of the Korçë District. It has a population of around 105,000 people (2009 census),[1] making it the sixth largest city in Albania. It stands on a plateau some 850 m (2,789 ft) above sea level, surrounded by the Morava Mountains.

Neolithic remains have been found indicating occupation of the site from 4000 BC onwards. The Copper Age lasted from 3000 BC to 2100 BC. Mycenean pottery was introduced in the plain of Korçë during the late Bronze Age (Late Helladic IIIc),[2] and has been claimed that the tribes living in this region before the Dark Age migrations, probably spoke a northwestern Greek dialect.[3] The area was on the border between Illyria and Epirus and according to a historical reconstruction was ruled by an Illyrian dynasty until 650 BC, while after 650 BC a Chaonian dynasty.[4][5][6] During this period the area was inhabited by ancient Greek tribes, possibly Chaonians or Molossians, which were two of the major three tribes inhabiting the region of Epirus.[7] Archaeologists have found a gravestone of the 2nd or 3rd century AD depicting two Illyrian blacksmiths working iron on an anvil near modern Korçë.[8]

A town named 'Coviza' is mentioned in medieval documents in 1280.[citation needed] The modern town dates from the end of the 15th Century, when Iljaz Hoxha, under the command of Sultan Mehmet II, developed Korçë.[9] The Ottoman occupation began in 1440, and after Hoxha's role in the siege of Constantinople, in 1453; he was awarded the title, 'Iljaz Bey Mirahor'. Korçë was a sandjak of the Manastir vilayet in the Ottoman Empire as Görice.[10] The city started to flourish when the nearby town of Moscopole was raided by the Muslim Albanian troops of Ali Pasha at 1788.[11] [12]

Korca is known for its back streets

Ottoman rule over Korçë lasted until 1912; although the city and its surroundings were supposed to become part of the Principality of Bulgaria according to the Treaty of San Stefano in 1878, the Treaty of Berlin of the same year returned the area to Ottoman rule.[13] Korçë's proximity to Greece, which claimed the entire Orthodox population as Greek, led to its being fiercely contested in the Balkan Wars of 1912-1913. Greek forces captured Korçë from the Ottomans in 6 December 1912 and afterwards proceeded to imprison the Albanian nationalists of the town.[14] Its incorporation into Albania in 1913 was disputed by Greece, who claimed it as part of a region called 'Northern Epirus', and resulted in a rebellion by the local Greek population that asked the intervention of the Greek army.[15] This rebellion was initially suppressed by the Dutch commanders of the Albanian gendarmerie, that consisted of 100 Albanians led by Themistokli Gërmenji, as a result the local Greek-Orthodox bishop Germanos and other members of the town council were arrested and expelled by the Dutch.[16][17] However, under the terms of the Protocol of Corfu (May 1914), the city became part of the Autonomous Republic of Northern Epirus inside the borders of the principality of Albania,[18] while in 10 July 1914 the Greek Northern Epirote forces took over the city.[19]

In October 1914 the city came again under Greek administration. During the period of the National Schism (1916) a local revolt broke out and with military and local support Korçë came under the control of Eleftherios Venizelos' Movement of National Defence, overthrowing the royalist forces.[20] However, due to developments in the Macedonian Front of World War I the city came soon under French control (1916–1920). During this time fourteen representatives of Korçë and Colonel Descoins signed a protocol that proclaimed the Autonomous Albanian Republic of Korçë (Albanian: Republika Shqipëtare Korçë under the military protection of the French army and with Themistokli Gërmenji as president.[16][21] It ultimately remained part of Albania, as determined by the International Boundary Commission, which affirmed the country's 1913 borders.

During the inter-war period, the city became a hotbed of Communist agitation. Albania's future dictator, Enver Hoxha, lived there and was both a pupil and a teacher at the town's French school. Korçë's underground Communist movement became the nucleus of Hoxha's Albanian Party of Labour. During the 1930s, the Bank of Athens had a branch in the city.

Italian forces occupied Korçë in 1939, along with the rest of the country. After the outbreak of the Greco-Italian War, the Greek Army entered the city in November 1940, which remained under Greek sovereignty until the German attack in April 1941. After Italy's withdrawal from the war in 1943, the Germans occupied the town until October 24, 1944.

During the occupation, the city became a major center of Communist-inspired resistance to the Axis occupation of Albania. The establishment of the Albanian Party of Labour – the Communist Party – was formally proclaimed in Korçë in 1941. Albanian rule was restored in 1944 following the withdrawal of German forces. 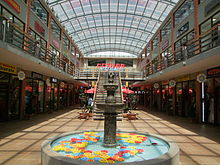 The area suffered from Hoxha's dictatorial regime like the rest of Albania, although it is arguable whether it was to as great an extent. Hoxha mainly fought against the rich, despite the fact that they had often fought against the Nazi and Fascist occupations. Right after World War II many people fled to Boston, USA, joining a community of the Albanian-Americans, who had previously emigrated there.

After 1990 Korçë was one of the six cities where the New Democratic Party won all the constituencies. Popular revolts in February 1991 ended with the tearing down of Hoxha's statue.

Korçë has a transitional mediterranean climate (or continental mediterranean climate) with high temperature amplitudes. The hottest month is August (25 °C (77 °F)) while January (2 °C (36 °F)) is the coldest. The city receives around 650 millimeters (26 in) annual precipitation with summer minimum and winter maximum. The temperatures in Korçë generally remain cooler than the western part of Albania, due to the middle altitude of the plain in which it is situated, but it receives about 2300 hours of solar radiation per year, so its temperatures are higher than those in Northeastern Albania. Temperatures can still reach up to 40 °C (104 °F) or higher on occasions. 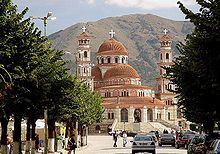 Korçë has been an important religious center for Orthodox Christians for centuries. It has a large Orthodox community and it is the seat of an Orthodox metropolitan bishop. There is also a large Sunni community in and around the city. Islam entered the city in the 15th century through Iljaz Hoxha, a famous Albanian jannissary, who actively participated in the Fall of Constantinople.[9] One of the oldest mosques was built in Albania by Iljaz Hoxha in 1484, the Ilias Mirahori Mosque.[22] Also a Bektashi community is present in the city. The main center of the Bektashis of the area is the Turan Tekke.

Korçë is called the city of museums. The National Museum of Medieval Art of Albania, has a rich archives of ca. 6500 icons and 500 other objects in textile, stone and metal. The National Museum of Archeology is located in Korçë. The first Albanian School as well as the house of the painter Vangjush Mio and his gallery function as museums. Another museum in Korçë is the Bratko Museum and the Oriental Museum. 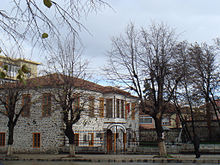 The first school, a Greek language school, in the city was established in 1724.[23] This school was destroyed during the Greek War of Independence but it reopened at 1830. In 1857 a female Greek language school was operating in the city.[24] During the 19th century various local benefactors such as Ioannis Pangas donated money for the promotion of Greek education and culture in Korçë.[25][26] A special community fund, named the Lasson fund, was established in 1850 by the local Orthodox bishop Neophytos [27] in order to support Greek cultural activity.[28] The city also hosted a Romanian school at that time.[citation needed]

In the end of 19th century local Albanians expressed a growing need to be educated in their native language.[29] The first Albanian language school was established in 1887 by the Drita (English: Light) organization and funded by notable local individuals. Its first director was Pandeli Sotiri.[30] Naim Frashëri, the national poet of Albania played a great role in the opening of the school in 1887. As a high-ranking statesman in the ministry of education of the Ottoman Empire he managed to get official permission for the school. The Ottoman authorities gave permission only for Christian children to be educated in Albanian, but the Albanians did not follow this restriction and allowed also Muslim children to attend. As a result the school was closed in 1902 by the Ottoman authorities.[31]

The school was followed by Albania's first school for girls in 1891. The school, started by Gjerasim Qiriazi was later run by his sisters, Sevasti and Parashqevi Qiriazi together with Polikseni Luarasi (Dhespoti). Later collaborators were the Rev. & Mrs. Grigor Çilka and Rev & Mrs. Phineas Kennedy of the Congregational Misson Board of Boston.

When the city was under French administration in 1916 (the Republic of Korçë), Greek schools were closed and 200 Albanian and French language schools were opened. A few months later Greek schools were reopened as a reward and result of Greece's adhesion to the Entente alliance, part of which was France, although the decision to reopen them was in contradiction with the wishes of the population.[32] Particularly relevant was the opening in 1917 of the Albanian National Lyceum.

The city is home to Fan Noli University, founded in 1971, which offers several degrees in humanities, business, and sciences. The University includes a school in Agriculture, Teaching, Business, Nursing, and Tourism.

In April 2005 the first bilingual Greek-Albanian school opened in Korçë after 60 years of prohibition of Greek education in the city.[33] In addition, a total of 12 Greek language institutes are functioning in the city.[34]

During the 20th century, Korçë gained a substantial industrial capacity in addition to its historic role as a commercial and agricultural centre. The plateau on which the city stands is highly fertile and is one of Albania's main wheat-growing areas. Local industries include the manufacture of knitwear, rugs, textiles, flour-milling, brewing, and sugar-refining. Deposits of lignite coal are mined in the mountains nearby such as Mborje-Drenovë. The city is home to the nationally famous Birra Korça.

In alphabetical order by last name:

Korçë is twinned with: