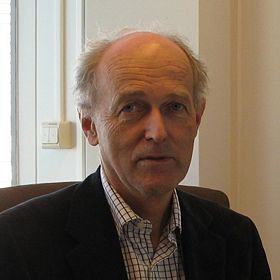 Jan Dietz was born in 1945 in Brunssum. He obtained a M.A. in Electrical Engineering in 1970 at Eindhoven University of Technology, and later in 1987 a PhD on the subject of modeling and specifying information systems.

Dietz worked as practitioner in the field of automation and information systems from 1970 to 1980. Here he developed one of the first relational model based production control systems at Philips Factories, a state of the art computer accounting system at Eindhoven University of Technology, and a terminal-based, interactive theatre reservation system. In 1980 he returned to academia. After he obtained his Doctoral Degree in 1987 he was appointed Professor of Management Information Systems at the University of Maastricht in the Faculty of Economics and Business Administration[1], where he started the development of the DEMO theory and methodology. From September 1994 to Oct 2009 he was Professor of Information Systems Design at Delft University of Technology.[2] Since then he is parttime Professor of Enterprise Engineering at the Instituto Superior Técnico (IST - Technical University of Lisbon).[3]

Dietz has held several managerial positions in organizing these courses. He has held several commissionerships and he has been chairman of the Dutch national professional association of informaticians. Next to that he is and has been member of the editorial board of numerous journals and of the program committee of numerous conferences. He has been the Dutch national representative in IFIP TC8 on Information Systems for many years and is member of IFIP WG8.1 on design and Evaluation of Information Systems.[2]

Dietz' main research interests is in modeling, design and redesigning and engineering and reengineering of organizations, and in the development of ICT-applications to support them.[2] In the new millennium Dietz has focussed on the emerging field of Enterprise engineering, which emerged in between information systems engineering and the organizational sciences.

In 2006 he published a book on Enterprise Ontology[4] , and is continuing working on Enterprise Architecture. To promote these ideas he initiated an international network under the name "Cooperation & Interoperability - Architecture & Ontology" (CIAO).[5]

Inspired on the Language Action Perspective in the 1980s Dietz has been developing a methodology for transaction modelling, and analysing and representing business processes called "Design & Engineering Methodology for Organizations" (DEMO).[6] The Language Action Perspective itself is largely based on the speech act theory developed by John Searle. It was introduced in the field of information systems by the computer scientists Fernando Flores and J.J. Ludlow early 1980s[7] has "proven to be a new basic paradigm for Information Systems Design. In contrast to traditional views of "data flow", the language/action perspective emphasizes what people do while communicating, how they create a common reality by means of language, and how communication brings about a coordination of their activities".[8]

Diagram of the principle of a DEMO transaction between two actors, with the result in between.

In DEMO the basic pattern of a business transaction is composed of the following three phases:[9]

Basic transactions can be composed to account for complex transactions. The DEMO methodology gives the analyst an understanding of the business processes of the organization, as well as the agents involved, but is less clear about pragmatics aspects of the transaction, such as the conversation structure and the intentions generated in each agents mind.[9]

Jan Dietz is the founder of the DEMO, and he is also co-founder and chairman of the DEMO Knowledge Center [10] and he has participated in numerous practical DEMO-projects regarding the redesign and reengineering of organizations. Since early 2004 he is also the leader of the national research program Extensible Architecture Framework. [11]

Enterprise Ontology is about the need to develop organizational models on a high-level of abstraction, in order to be able to develop effective and efficient, so called, inter- and intra-enterprise information systems. These models need to be so that it is understood both by business people, who are defining their functionality, and software engineers, who are constructing and implementing the software systems that realize the system's functionality. The idea of business components for modeling information systems is very valuable since they directly reflect the business rules and the constraints that apply to the enterprise domain.[12]

Dietz has published over 200 scientific and professional papers as well as several books:[13][14] Books:

Articles, chapters and papers, a selection: