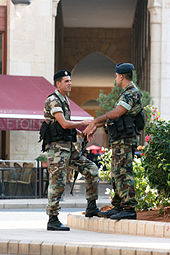 Soldiers of the Lebanese army, 2009

The Lebanese Armed Forces' primary missions include defending Lebanon and its citizens against external aggression, maintaining internal stability and security, confronting threats against the country's vital interests, engaging in social development activities and undertaking relief operations in coordination with public and humanitarian institutions.[2]

The LAF consists of 56.000 active personnel[3] with the Land forces consisting of approximately 54.000 troops, the air & air defense forces consisting of about 1.000 personnel and another 1.000 in the naval forces. All three branches are operated and coordinated by LAF Command, which is located in Yarzeh, east of Lebanon's capital, Beirut. Currently the LAF is ranked 6th in the world in terms of growth, with the number of military personnel doubling over the period between 1985 to 2000.[4] The country has six military colleges and schools. The Lebanese officers are sent to other countries such as Russia or Europe to receive additional training.

The equipment of the LAF is outdated due to lack of funds, political bickering and until recently the presence of foreign forces.[citation needed] After the conclusion of the Lebanese Civil War, the LAF decided to repair as much of its equipment as it could, while being aided by modest donations from other nations. About 85% of the LAF's equipment is American-made with the remaining being British, French, and Soviet-made.[5] 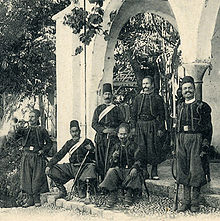 Lebanese soldiers during the mutasarrif period

The Lebanese Army first formed under Prince Fakher el-Din II the Great in the early 17th-century during the Principality of Lebanon (1516-1840). The first major victory came on October 31, 1622 against the Syrian army of the Pasha of Damascus in the Battle of Majdel Anjar. Outnumbered (5,000 Lebanese soldiers against 12,000 Syrians), Fakher el-Din was nevertheless victorious and was able to capture the Pasha of Damascus for himself.[6]

During the period of the semi-autonomous province (Mutasarrifia) period of Mount Lebanon between 1861 and 1914, no Turkish troops were allowed to station within its boundary. Lebanon established its own army made up of volunteer militias; "the free independent bearing of these mountaineers was in striking contrast to that of the underpaid, underfed and poorly clothed conscripts of the regular [Turkish] army".[7]

The beginnings of the modern army arose during 1916, when the French government established the "Legion of the Orient", which included Lebanese soldiers.[8] After a post World War I League of Nations mandate was established over Lebanon in April 1920, France formed the Army of the Levant, which was later reorganized into the "Troupes Spéciales du Levant" (Special Troops of the Levant). These troops were composed of Lebanese and Syrian enlisted personnel, but were commanded predominantly by French officers; however, the percentage of Lebanese and Syrian officers in the force gradually increased in size to approximately 90% of the total number by 1945.[9]

Later in 1926, the Lebanese First Sharp Shooters Unit was created out of the Special Troops of the Levant; it is considered to be a direct precursor to the Lebanese Armed Forces (LAF).[8]

During World War II, Lebanese troops fought in Lebanon with the Vichy French forces against Free French and British forces. After the Vichy forces in the Middle East surrendered in July 1941, volunteers from the Troupes Spéciales du Levant enlisted in the Free French forces and participated in combat in Italy, North Africa, and southern France.[9] In 1943, prior to the declaration of Lebanese independence, all the military units were combined in one brigade, the Fifth Brigade, under the command of General Fouad Chehab. On the day Lebanon declared independence, the Lebanese Third Sharp Shooters Regiment was placed at the disposal of the Lebanese government in order to maintain security. In June of the same year, the French reconstituted units of the Troupes Spéciales du Levant, which were then attached to the British forces in the Middle East. The majority of the Lebanese Armed Forces remained a part of the French Army in Lebanon.[9]

After gaining independence in 1943, the Lebanese government formed an official delegation in 1944 to negotiate with the French the terms related to handing over the LAF. After nearly three weeks of talks, the joint French-British Command decreed that responsibility for armed units under French control were to be handed over to the Independent Government of Lebanon.[8] These units were part of the Troupes Spéciales du Levant and totaled about 3,000 men.[9] On August 1, 1945 at 00:00 hours, the LAF was placed under full authority of the Lebanese National Government; this day is commemorated annually as Lebanese Army Day.[8]

The Lebanese Army first flag under the Independent Lebanon

After establishing authority over the LAF in 1945, the Lebanese government intentionally kept its armed forces small and weak due to the country's unique internal politics. Christian politicians feared that Muslims might use the armed forces as a vehicle for seizing power in a military coup. They also appeared unwilling to incur the cost of maintaining a large well equipped army.[9] Throughout the 1950s and 1960s, Lebanon never spent more than 4% of its GNP on the military budget.[9] Many Christian Lebanese also feared that a large army would inevitably force Lebanon into the Arab–Israeli conflict. However, Muslim politicians were also worried that a strong army could be used against Muslim interests because it would be commanded by Christians. At the same time they tended to feel that the military should be strong enough to play a part in the Arab-Israeli struggle.[9] In addition to the two major conflicting views, prominent Lebanese politicians of the myriad religious denominations in Lebanon have also tended to be feudal warlords commanding their own private militias and feared that a strong army would endanger their personal power.[9]

In 1948, the Lebanese Third Sharp Shooters Regiment fought Israeli Forces occupying the Lebanese village of Malkieh in the northern Galilee and captured it, and that by the orders of Lebanese defense minister then, Emir Majid Arslan II.[8][10] This was the first major combat operation for the Lebanese Armed Forces under the Independent Lebanese Government.

The Lebanese Armed Forces' strength lies in their ground forces which is by far the largest of the three branches of the military.

The Fourth Brigade was previously active but was disbanded in 1984.

The Lebanese Army still uses equipment mostly received through donations or friendly prices. Its work horse is the M113 which is commonly used by every regiment and brigade. A collection of Western and Soviet made arms and equipment exists ranging from rifles to tanks. However, the Lebanese army is trying to rearm and modernize itself through new aids and purchases from different countries such as the US, Belgium, Russia, and The Netherlands. A list of awaiting-for-delivery equipment is constantly growing and includes Leopard 1/A5 tanks,[11][12] more M60 Patton tanks,[13][14] M198 Howitzers, etc. A recent Russian promise to supply Lebanon with T-90 tanks has been in discussion since the Lebanese Defense Minister's last visit to Russia on December 16, 2008.[15]

Throughout history the Lebanese Army employed different arms and equipment which, at the time, were considered state of the art. Most of these arms have either been phased out of service or sold to other countries. Among the major equipment that is not currently active are AMX-13, Saladin, Panhard M3, and Staghound.

The Lebanese Special Forces are the elite of the Lebanese army, those who enroll are subjected to rigorous training regimes and must be in peak physical and mental condition prior to their ascension to such a highly desired position. Each branch of the Armed Forces consist of their own form of Special Forces or Commandos. These include:

To ensure the effectiveness of such an elite force, many Commandos are sent overseas to nations such as the US, UK and France to receive extra training in specialized areas that the Lebanese Armed Forces are unable to provide, due to a lack of resources. While training in Lebanon, each Commando is instructed in the art of urban and guerrilla warfare. So rigorous is their domestic training regime that each commando is subjected to a training timetable consisting of 20 hours per day for 3 months, which is divided into different stages. Each stage consists of a specialized form of warfare and its associated tactics. Such tactics include: sabotage, sniping, extraction and covert operations. The Lebanese Special Forces are also well known for killing and eating snakes with their bare hands at graduation ceremonies.[16][17]

In 2008, the Lebanese Army started establishing the Special Operations command in order to group the Army's elite units. These Special Operations forces will include the Airborne Regiment, the Commandos Regiment,the Navy Commandos Regiment, and the Counter-Sabotage Regiment of the Military Intelligence. The initial size of the force will be less than two brigades, around 5,000 troops, but the plan is to enlarge it up to three brigades.[18]

The Lebanese Navy is responsible for protecting Lebanon's territorial waters, ports, and fighting illegal smuggling of goods. The structure of the navy is centralized around the Navy Command, then it branches off into the quarter-general of the Navy, the Department of Naval Equipment Stores, the Naval School, Beirut Naval Base and the Jounieh Naval Base.

The navy, which currently lacks the suitable amount of equipment, has a number of approximately 50 vessels of various sizes and roles; however, the navy is trying to modernize itself, and increase its size.

The Lebanese Air Force is the air force branch of the Lebanese Armed Forces. It currently has a number of helicopters including the UH-1H Bell Huey, Gazelle, and various others. The air force is currently in the process of restoring its jet capabilities and considering the purchase of a small number of fighters or jet trainers.

The Lebanese Armed Forces has six official military colleges and schools that serve a wide variety of functions from officer training to overseeing national youth conscription programs. The recent emphasis on the First Flag Service Center is designed to help overcome the diverse nature of the population. The schools and colleges are:

The Staff and Command College, Military Academy, and Mountain Skiing Fighting School are training centers for Lebanese soldiers designed to upgrade the quality of their skills while the High Center for Military Sport is designed to keep them in peak physical shape (it also organizes sports groups and teams for international competition as well). The Training Institute is designed to help soldiers specialize in certain aspects of the military, such as artillery and defense.[19]