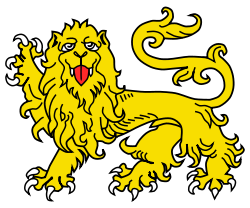 In heraldry, an attitude is the position in which an animal, fictional beast, mythical creature, human or human-like being is emblazoned as a charge, supporter or crest. Many attitudes apply only to predatory beasts and are exemplified by the beast most frequently found in heraldry — the lion. Some other terms apply only to docile animals, such as the doe. Other attitudes describe the positions of birds, mostly exemplified by the bird most frequently found in heraldry — the eagle. The term naiant (swimming), however, is usually reserved for fish but may also apply to swans, ducks or geese. Birds are often further described by the exact position of their wings. One attitude, segreant, is apparently reserved for mythical creatures, as this term is the approximation of rampant as it applies to winged quadrupeds such as griffins and dragons. Additionally, there are positions applying to direction, to indicate variations from the presumed position of any charge. Animals and animal-like creatures are presumed to be shown in profile, facing dexter (the viewer's left), and humans and human-like beings are presumed to be shown affronté (facing the viewer), unless otherwise specified in the blazon.

There are perhaps slightly fewer than a hundred terms in the Anglophone heraldries for attitudes of creatures (real and imaginary) that can be found in blazons in the official records, in common and fairly reliable reference books, and on fairly reliable internet sites - and are the usages of the last three and a half centuries. Probably the most common, and reliably attested[citation needed] are :

Some are pretty rare (but reliably attested), some are synonyms of each other, but all are there, almost all of them to be found in 'working' heraldry (real coats of arms etc.) rather than the speculations of the theorists. What follows below is a small selection by way of introduction.

Note that the heraldic terms dexter ('right') and sinister ('left') are defined with respect to the bearer of a shield, standing behind it, rather than to the viewer.

Many attitudes commonly met with in heraldic rolls apply specifically to predatory beasts, while others may be better suited to the docile animals. These will each be discussed in detail below. Also worth note is that a lion or other beast may additionally be described in terms of the position of its head, differently coloured parts (such as teeth, claws, tongue, etc.), or by the shape or position of its tail. A beast may be "armed" (horns, teeth and claws) or "langued" (tongue) of a tincture, while a stag may be "attired" (antlers) or "unguled" (hooves) of a tincture. A lion (or other beast) coward carries the tail between its hind legs.[1] The tail also may be forked (queue fourchée) or doubled (double-queued).

A beast rampant (Old French: "rearing up") is depicted in profile standing erect with forepaws raised.[2] The position of the hind legs varies according to local custom: the lion may stand on both hind legs, braced wide apart, or on only one, with the other also raised to strike; the word rampant is sometimes omitted, especially in early blazon, as this is the most usual position of a carnivorous quadruped. Note: the term segreant denotes the same position, but is only used in reference to griffins and dragons.[3] Rampant is the most frequent attitude of quadrupeds, and as supporters they are rarely seen in any other attitude.

A beast passant (Old French: "striding") walks toward the viewer's left, with the right forepaw raised and all others on the ground.[4] A "Lion of England" denotes a lion passant guardant Or, used as an augmentation.[4] For stags and other deerlike beasts of chase, the term trippant is used instead of passant. Interestingly, French heralds have long held that any lion in a walking position must necessarily be a "leopard", though this practice is controversial.[5]

A beast sejant or sejeant (Middle French: seant, "sitting") sits on his haunches, with both forepaws on the ground.[6]

A beast sejant erect is seated on its haunches, but with its body erect and both forepaws raised in the "rampant" position (this is sometimes termed "sejant-rampant").[6]

A beast couchant (Old French: "lying down") is lying down, but with the head raised.[7] Lodged is the term for this position when applied to the 'docile' (i.e. herbivorous) animals.

A beast courant (also at speed or in full chase) is running, depicted at full stride with all four legs in the air.

A beast dormant (French: "sleeping") is lying down with its eyes closed and head lowered, resting upon the forepaws, as if asleep.[7]

A beast salient (Latin: saliēns, "leaping") (also springing) is leaping, with both hind legs together on the ground and both forelegs together in the air.[8] This is a very rare position for a lion,[8] but is also used of other heraldic beasts. The stag and other docile animals in this position are often termed springing. Certain smaller animals are sometimes blazoned as saltant rather than salient.

A beast statant (Old French: "standing") is "standing" (in profile toward dexter), all four feet on the ground, usually with the forepaws together.[9] This posture is more frequent in crests than in charges on shields.[8] In certain animals, such as bears, this may refer to an upright, bipedal position (though this position may also be referred to as statant erect), though bears blazoned as 'statant' also can also be found with all four feet firmly on the ground (e.g. in the arms of the former borough council of Berwick-upon-Tweed). While statant is used in reference to predatory beasts, the more docile animals when in this position may be called at bay, while such creatures statant guardant are said to be at gaze.

A pelican in her piety, wings addorsed and elevated

Some attitudes describe the positioning of birds. The eagle is so often found displayed in early heraldry that this position came to be presumed of the eagle unless some other attitude is specified in the blazon. One peculiar attitude among birds, reserved only to the pelican, is the pelican in her piety (i.e. wings raised, piercing her own breast to feed her chicks in the nest). This symbol carries a particular religious meaning, and became so popular in heraldry that pelicans rarely exist in heraldry in any other position.[10] A distinction is sometimes observed, however, between a pelican "vulning herself" (alone, piercing her breast) and "in her piety" (surrounded by and feeding her chicks).[11]

Several terms refer to the particular position of the wings, rather than the attitude of the bird itself. A bird in nearly any attitude, except trussed, may have wings displayed, addorsed, elevated or inverted.

A bird displayed is shown affronté with its head turned to dexter and wings spread to the sides to fill the area of the field. This position is presumed of the eagle, and the symbolic use of eagles in this position was well established even before the development of heraldry, going back to Charlemagne.[12]

A bird rising or rousant faces dexter with its head upturned and wings raised, as if about to take flight. A bird rising may have its wings described as either displayed or addorsed, and the wings may be further described as elevated or inverted.

A bird volant faces dexter with its wings spread in flight.

A bird trussed, close, or perched is at rest with its wings folded.

Few attitudes are reserved to the rarer classes of creatures, but these include segreant, a term which can only apply to winged quadrupeds; naiant and hauriant, terms applying principally to fish; glissant and nowed, terms applying to serpents. Serpents also sometimes appear in a circular form, biting their own tail, but this symbol, called an Ouroboros, was imported ready-made into heraldry, and so it needs no term of attitude to describe it.

A creature segreant has both forelegs raised in the air, as a beast rampant, with wings elevated and addorsed. This term is reserved to winged quadrupeds (i.e. griffins and dragons).

Creatures combatant are shown in profile facing each other in the rampant or segreant position, always paired and never appearing singly. Nearly any creature can be rendered combatant, although this term is usually applied to predatory beasts and mythical creatures; herbivorous animals in such a position are typically blazoned as respectant.

Creatures or objects addorsed or endorsed are shown facing away from each other. As with combatant, charges addorsed can only appear in pairs. One also frequently finds keys addorsed (placed in parallel, wards facing outward).

An animal or creature naiant is swimming. This term is typically applied to fish (when shown in a horizontal position), but may also apply to other sea creatures and, occasionally, water fowl (i.e. swans, ducks or geese). A dolphin blazoned as naiant is always shown as embowed, unlike any other sea creature or monster, even though the blazon may not specify this.

A fish, dolphin, or other sea creature hauriant is in a vertical position with its head up.

A serpent glissant is gliding horizontally in an undulant posture.

Serpents, and the tails of other beasts and monsters, may be nowed or knotted — often in a figure 8 knot.