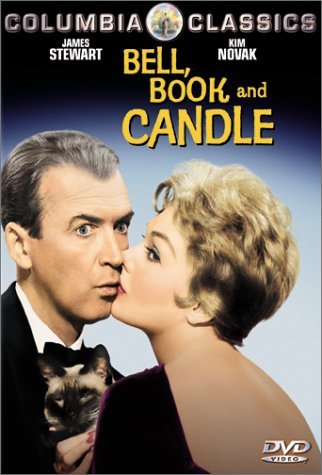 "Bell, Book and Candle" is a directed by and starring James Stewart and in their second on-screen pairing (after the classic "Vertigo"). The film, based on a play written by and adapted by , was Stewart's last film as a romantic lead.

Fans of the film point to similarities between it and the earlier "" and especially the television series "", speculating that this picture may have been an inspiration.

Gillian Holroyd (), a free spirit with a penchant for going barefoot, has been unlucky in love and restless in life. She admires from afar her neighbor, publisher Shep Henderson (James Stewart), who one day walks into her gallery of primitive art to use the telephone. When she learns he is about to marry an old college enemy of hers, Merle Kittridge (), she takes revenge by casting a love spell on him, but begins falling for him herself. She must eventually make a stark choice, as witches who fall in love lose their supernatural powers. Gillian's cat and , Pyewacket, becomes agitated and leaves her when she decides in Shep's favor.

Meanwhile, the author of a best-selling book, "Magic in Mexico", whom Shep has expressed an interest in meeting, arrives on the scene (thanks to a little magic). Sidney Redlitch (), who is researching a book on witches in New York, acquires an "inside" collaborator when Gillian's brother Nicky () volunteers his services - in exchange for a portion of the proceeds.

Gillian uses her magic to make Shep lose interest in Nicky and Redlitch's book and then confesses her identity as a witch to Shep. He becomes angry that she enchanted him just to spite Merle, and the two fight. Gillian attempts to cast various spells on Merle (such as making her fall in love with the first man that walks into her apartment and sending her around the world), but finds that she has lost her powers because of her love for Shep. Shep meanwhile, tries unsuccessfully to explain to Merle that Gillian is a witch. He then finds that he literally cannot leave Gillian, because of the spell. To escape, he turns to another witch, Mrs. Bianca de Passe (), who breaks the spell. He leaves, leaving Gillian heartbroken. Months later, Shep returns and discovers that Gillian has lost her magic powers because of her love for him. The two reconcile.

When first released in by , "Bell, Book and Candle" was a moderate success. The soundtrack, featuring and who appeared in the film in cameo appearances, also found success.

*"Stormy Weather" - performed by Jack Lemmon on the bongo drums with the band at the Zodiac Club (the Brothers Candoli on trumpets, and an unknown guitar player)
*"Deck the Halls" - performed by James Stewart by whistling
*"Jingle Bells" - played during the opening credits