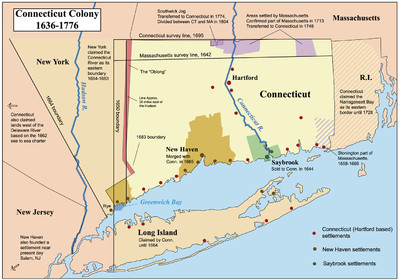 A map of the Connecticut, New Haven, and Saybrook colonies.

The Saybrook Colony was established in late 1635 at the mouth of the Connecticut River in present day Old Saybrook, Connecticut by John Winthrop, the Younger, son of John Winthrop, the Governor of Massachusetts. The former was designated Governor by the original settlers which included Colonel George Fenwick and Captain Lion Gardiner. They claimed possession of the land via a deed of conveyance from Robert Rich, 2nd Earl of Warwick. The colony was named in honor of Puritan Lords Saye, or William Fiennes, 1st Viscount Saye and Sele and Robert Greville, 2nd Baron Brooke, prominent Parlamentarians, hence the name, Saybrooke.

Early settlers of the colony were ardent supporters of Oliver Cromwell and democracy. In the 1630s in what would become Connecticut, it was rumored that Cromwell’s emigration from England to Saybrooke was imminent, along with the departure from Old England of other prominent Puritan sponsors of the colony, including John Pym, John Hampden, Arthur Haselrig, and Lords Saye and Brooke. Even as late as the 1770s, residents of Old Saybrook still talked about which town lots would be given to prominent Parlamentarians.

Settlement preparations included sending a ship with an unusual cargo: ironwork for a portcullis and drawbridges, even an experienced military engineer.[2] Saybook’s fort was to be the strongest in New England. However, they soon ". . . found the countrie (England) full of reports of their going . . ." and were worried they’d not be allowed to sell their estates and take ship. By 1638 the plans for Saybrook were moot. As for Cromwell, his financial difficulties had been cleared up by an inheritance and he moved from Huntingdon to nearby Ely. Thus the sponsors remained in England and played their respective seminal political and military roles in the English Civil War and its aftermath. As a consequence the colony struggled and by 1644, Fenwick agreed to merge the colony with the more vibrant Connecticut Colony a few miles up river.