Mamma Mia! Original Cast Recording is the original cast album for the 1999 English stage musical Mamma Mia!. The album was released in 1999 and it reached No.56 in the UK album chart, with 2 weeks on the chart. Mamma Mia! reinvigorated the popularity of ABBA (the film soundtrack was the best selling album of the week and several songs made the top #75 in the UK singles chart). The re-interest in the 1999 Studio Cast album caused it to reach #12 in the UK Album Chart, having charted at #16 a week earlier. It features performances by the musical's cast including Lisa Stokke, Siobhan McCarthy and Hilton McRae. The album was produced by the two male members of ABBA, Benny Andersson and Bjorn Ulvaeus

The album featured a number of ABBA's best known songs, including the title track, "Dancing Queen", "Gimme! Gimme! Gimme! (A Man After Midnight)" and "Thank You for the Music".[1] 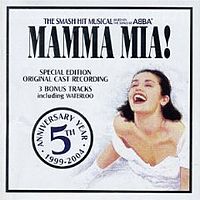 The album was re-released in 2004, five years after its initial release. The new edition contained the original 24 tracks as well as a few bonus tracks: a new version of "Dancing Queen", a re-recorded "Mamma Mia" and a new version of a track missed off the 1999 release, "Waterloo".[2]