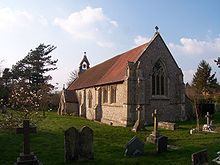 Church of St. Leonard in Cliddesden.

Cliddesden is a parish in Hampshire, England located 3 miles south of Basingstoke, close to the M3 motorway. In the 2001 census it had a population of 489. The land and housing are currently protected as it is within a Conservation Zone and has many areas of beauty and rolling countryside.

The village was formerly served by Cliddesden railway station on the now defunct Basingstoke and Alton Light Railway. The station was used in the making of several films. In the 1937 film Oh, Mr Porter!, Cliddesden appeared as 'Buggleskelly'. A short length of railway track was installed in the centre of the Viables Roundabout in Basingstoke in 1976 to commemorate the line at a point close to its original route.[1]