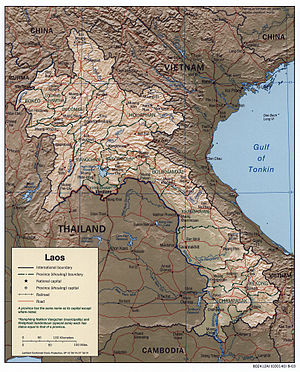 Laos is a landlocked nation in Southeast Asia, northeast of Thailand, west of Vietnam, that covers 236,800 square kilometers in the center of the Southeast Asian peninsula, is surrounded by Burma (Myanmar), Cambodia, the People's Republic of China, Thailand, and Vietnam. Its location has often made it a buffer between more powerful neighboring states, as well as a crossroads for trade and communication. Migration and international conflict have contributed to the present ethnic composition of the country and to the geographic distribution of its ethnic groups.

Most of the western border of Laos is demarcated by the Mekong River, which is an important artery for transportation. The Dong falls at the southern end of the country prevent access to the sea, but cargo boats travel along the entire length of the Mekong in Laos during most of the year. Smaller power boats and pirogues provide an important means of transportation on many of the tributaries of the Mekong. 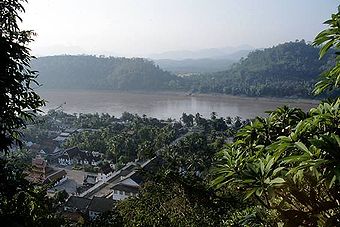 The Mekong at Luang Prabang, Laos

The Mekong has thus not been an obstacle but a facilitator for communication, and the similarities between Laos and northeast Thai society--same people, same language--reflect the close contact that has existed across the river for centuries. Also, many Laotians living in the Mekong Valley have relatives and friends in Thailand. Prior to the twentieth century, Laotian kingdoms and principalities encompassed areas on both sides of the Mekong, and Thai control in the late nineteenth century extended to the left bank. Although the Mekong was established as a border by French colonial forces, travel from one side to the other has been significantly limited only since the establishment of the Lao People's Democratic Republic (LPDR, or Laos) in 1975. 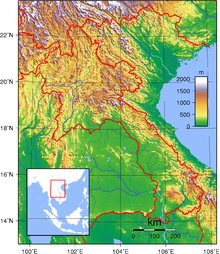 The eastern border with Vietnam extends for 2,130 kilometers, mostly along the crest of the Annamite Chain, and serves as a physical barrier between the Chinese-influenced culture of Vietnam and the Indianized states of Laos and Thailand. These mountains are sparsely populated by tribal minorities who traditionally have not acknowledged the border with Vietnam any more than lowland Lao have been constrained by the 1,754-kilometer Mekong River border with Thailand. Thus, ethnic minority populations are found on both the Laotian and Vietnamese sides of the frontier. Because of their relative isolation, contact between these groups and lowland Lao has been mostly confined to trading.

Laos shares its short--only 541 kilometers--southern border with Cambodia, and ancient Khmer ruins at Wat Pho and other southern locations attest to the long history of contact between the Lao and the Khmer. In the north, the country is bounded by a mountainous 423-kilometer border with China and shares the 235-kilometer-long Mekong River border with Burma.

The topography of Laos is largely mountainous, with elevations above 500 meters typically characterized by steep terrain, narrow river valleys, and low agricultural potential. This mountainous landscape extends across most of the north of the country, except for the plain of Vientiane and the Plain of Jars in Xiangkhoang Province. The southern "panhandle" of the country contains large level areas in Savannakhét and Champasak provinces that are well suited for extensive paddy rice cultivation and livestock raising. Much of Khammouan Province and the eastern part of all the southern provinces are mountainous. Together, the alluvial plains and terraces of the Mekong and its tributaries cover only about 20% of the land area.

Only about 4% of the total land area is classified as arable. The forested land area has declined significantly since the 1970s as a result of commercial logging and expanded swidden, or slash-and-burn, farming. 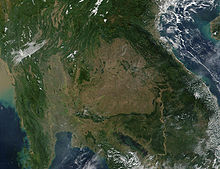 On November 30, 2001, MODIS captured this image of southeastern Asia. The image focuses on the countries of Burma, Thailand, Laos, Cambodia, and Vietnam, left to right respectively. In eastern Thailand, the brown coloring that dominates the center of the image and mimics the country's border with Laos and Cambodia, speaks of the massive deforestation that occurs in this region. One of southeastern Asia's prominent environmental concerns, deforestation has played a major role in flooding in the region.

Hundreds of active fires burning across the hills and valleys of Myanmar Thailand, Laos, and Vietnam (labelled with red dots).

Laos has a tropical monsoon climate, with a pronounced rainy season from May through October, a cool dry season from November through February, and a hot dry season in March and April. Generally, monsoons occur at the same time across the country, although that time may vary significantly from one year to the next. Rainfall also varies regionally, with the highest amounts-- 3,700 millimeters (145.7 in) annually--recorded on the Bolovens Plateau in Champasak Province. City rainfall stations have recorded that Savannakhét averages 1,440 millimeters (56.7 in) of rain annually; Vientiane receives about 1,700 millimeters (66.9 in), and Louangphrabang (Luang Prabang) receives about 1,360 millimeters (53.5 in). Rainfall is not always adequate for rice cultivation, however, and the relatively high average precipitation conceals years where rainfall may be only half or less of the norm, causing significant declines in rice yields. Such droughts often are regional, leaving production in other parts of the country unaffected. Temperatures range from highs around 40 °C (104 °F) along the Mekong in March and April to lows of 5 °C (41 °F) or less in the uplands of Xiangkhoang and Phôngsali in January.

Because of its mountainous topography and lack of development, Laos has few reliable transportation routes. This inaccessibility has historically limited the ability of any government to maintain a presence in areas distant from the national or provincial capitals and has limited interchange and communication among villages and ethnic groups. The Mekong and Nam Ou are the only natural channels suitable for large-draft boat transportation, and from December through May low water limits the size of the craft that may be used over many routes. Laotians in lowland villages located on the banks of smaller rivers have traditionally traveled in pirogues for fishing, trading, and visiting up and down the river for limited distances. Otherwise, travel is by ox-cart over level terrain or by foot. The steep mountains and lack of roads have caused upland ethnic groups to rely entirely on pack baskets and horse packing for transportation.

The road system is not extensive. However, a rudimentary network begun under French colonial rule and continued from the 1950s has provided an important means of increased intervillage communication, movement of market goods, and a focus for new settlements. In mid-1994, travel in most areas was difficult and expensive, and most Laotians traveled only limited distances, if at all. As a result of ongoing improvements in the road system during the early 1990s, however, it is expected that in the future villagers will more easily be able to seek medical care, send children to schools at district centers, and work outside the village. 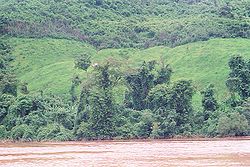 Clear-cut hillside along the Mekong River

Expanding commercial exploitation of forests, plans for additional hydroelectric facilities, foreign demands for wild animals and nonwood forest products for food and traditional medicines, and a growing population have brought new and increasing attention to the forests. Traditionally, forests have been important sources of wild foods, herbal medicines, and timber for house construction. Even into the 1990s, the government viewed the forest as a valued reserve of natural products for noncommercial household consumption. Government efforts to preserve valuable hardwoods for commercial extraction have led to measures to prohibit swidden cultivation throughout the country. Further, government restrictions on clearing forestland for swidden cropping in the late 1980s, along with attempts to gradually resettle upland swidden farming villages (ban) to lowland locations suitable for paddy rice cultivation, had significant effects on upland villages. Traditionally, villages rely on forest products as a food reserve during years of poor rice harvest and as a regular source of fruits and vegetables. By the 1990s, however, these gathering systems were breaking down in many areas. At the same time, international concern about environmental degradation and the loss of many wildlife species unique to Laos has also prompted the government to consider the implications of these developments.

Environment - current issues: unexploded ordnance; deforestation; soil erosion; a majority of the population does not have access to potable water