Lentivirus (lente-, Latin for "slow") is a genus of slow viruses of the Retroviridae family, characterized by a long incubation period. Lentiviruses can deliver a significant amount of genetic information into the DNA of the host cell and have the unique ability among retroviruses of being able to replicate in non-dividing cells, so they are one of the most efficient methods of a gene delivery vector. HIV, SIV, and FIV are all examples of lentiviruses.

Five serogroups of lentiviruses are recognized, reflecting the vertebrate hosts with which they are associated (primates, sheep and goats, horses, cats, and cattle). The primate lentiviruses are distinguished by the use of CD4 protein as receptor and the absence of dUTPase. Some groups have cross-reactive gag antigens (e.g., the ovine, caprine and feline lentiviruses). Antibodies to gag antigens in lions and other large felids indicate the existence of other viruses related to FIV and the ovine/caprine lentiviruses. Description is on taxonomic level of genus.

The virions are enveloped, slightly pleomorphic, spherical and measure 80–100 nm in diameter. Projections of envelope make the surface appear rough, or tiny spikes (about 8 nm) may be dispersed evenly over the surface. The nucleocapsids (cores) are isometric. The nucleoids are concentric and rod-shaped, or shaped like a truncated cone.

Features of the genome: infectious viruses have 3 main genes coding for the viral proteins in the order: 5´-gag-pol-env-3´. There are additional genes (also called accessory genes) depending on the virus (e.g., for HIV-1: vif, vpr, vpu, tat, rev, nef) whose products are involved in regulation of synthesis and processing viral RNA and other replicative functions. The Long terminal repeat (LTR) is about 600nt long, of which the U3 region is 450, the R sequence 100 and the U5 region some 70 nt long.

Although transmission is generally via infectious particles, lentiviruses are capable of infecting neighboring cells in direct contact with the host cells, without having to form extracellular particles.

Classed as having class C morphology 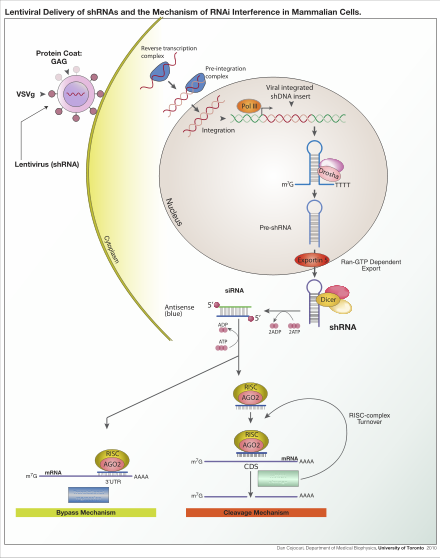 Lentiviral Delivery of designed shRNA's and the mechanism of RNA interference in mammalian cells.

Lentivirus is primarily a research tool used to introduce a gene product into in vitro systems or animal models. Large-scale collaborative efforts are underway to use lentiviruses to block the expression of a specific gene using RNA interference technology in high-throughput formats.[1] The expression of short-hairpin RNA (shRNA) reduces the expression of a specific gene, thus allowing researchers to examine the necessity and effects of a given gene in a model system. These studies can be a precursor to the development of novel drugs which aim to block a gene-product to treat diseases.

Another common application is to use a lentivirus to introduce a new gene into human or animal cells. For example, a model of mouse hemophilia is corrected by expressing wild-type platelet-factor VIII, the gene that is mutated in human hemophilia.[2] Lentiviral infection have advantages over other gene-therapy methods including high-efficiency infection of dividing and non-dividing cells, long-term stable expression of a transgene, and low immunogenicity. Lentiviruses have also been successfully used for transfection of diabetic mice with the gene encoding PDGF (platelet-derived growth factor),[3] a therapy being considered for use in humans. These treatments, like most current gene therapy experiments, show promise but are yet to be established as safe and effective in controlled human studies. Gammaretroviral and lentiviral vectors have so far been used in more than 300 clinical trials, addressing treatment options for various diseases.[4]