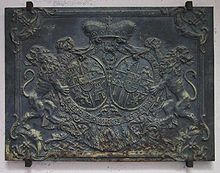 Coat of arms of the princes of Thurn and Taxis, Palais Thurn und Taxis, Frankfurt

The Princely House of Thurn and Taxis (German: das Fürstenhaus Thurn und Taxis) is a German family that was a key player in the postal services in Europe in the 16th century and is well known as owners of breweries and builders of many castles.

In the 12th century, the Lombardic family Tasso (meaning Badger or collector) was resident in the mountain village of Cornello now Cornello dei Tasso near Bergamo in Val Brembana. The translation of "Tasso" to German: Dachs was the origin of the name "Taxis", and the badger is still represented in the family coat of arms. In 1624 the family became counts (Grafen). In 1650 they changed their name to Thurn (= Turm = Tower) und Taxis. In 1695 they received their princely title from Holy Roman Emperor Leopold I.

Rainer Maria Rilke wrote his Duino Elegies while visiting Princess Marie of Thurn and Taxis (née princess of Hohenlohe) at her family's Duino castle. Rilke later dedicated his only novel The Notebooks of Malte Laurids Brigge to the princess, who was his patroness. Marie's relation to Regensburg's Thurn and Taxis is rather distant, however; she was married to Alexander Thurn and Taxis, a member of the family's branch that in the early 19th century settled in Bohemia (now Czech Republic) and became strongly connected to Czech national culture and history.

Several members of the family have been Knights of Malta.

The current head of the house of Thurn and Taxis is HSH Albert II, 12th Prince of Thurn and Taxis, son of Johannes and his wife, Gloria. The family is one of the wealthiest in Germany. The family has resided in St. Emmeram Castle in Regensburg since 1748. The family's brewery was sold to the Paulaner Group (Munich) in 1996, but still produces beer under the brand of Thurn und Taxis.

Ruggiano de Tassis founded a postal service in Italy. And later in Innsbruck, on 11 December 1489, Jeannetto de Tassis was appointed Chief Master of Postal Services. The family held its exclusive position for centuries. On 12 November 1516 the Taxis family had a postal service based in Brussels — where the eponymous extensive warehouse and railway goods yard complex is currently under development as a cultural centre — reaching to Rome, Naples, Spain, Germany and France by courier.

The Thurn und Taxis company would last until the 18th century, when the postal service was finally bought by the heir to the Spanish throne.

Princes of Thurn and Taxis