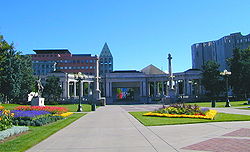 Civic Center is a neighborhood and park in Denver, Colorado. The area is known as the center of the civic life in the city, with numerous institutions of arts, government, and culture as well as numerous festivals, parades, and protests throughout the year. The park is home to many fountains, statues, and formal gardens, and includes a Greek amphitheater, a war memorial, and the Voorhees Memorial Seal Pond. It is well known for its symmetrical Neoclassical design.

Civic Center is located in central Denver just south of the Central Business District. The park is located at the intersection of Colfax Avenue and Broadway, perhaps the best-known and most important streets in Denver. The park borders are defined as Bannock Street on the west, Lincoln Street on the east, Colfax Avenue on the north, and 14th Avenue on the south. The institutions surrounding the civic center are generally thought of as part of the Civic Center area, and future plans for the civic center would extend the area further west all the way to Speer Boulevard.

Civic Center is also a neighborhood defined by the Denver city government, but is probably identified in the minds of Denverites as the "Golden Triangle." The borders of this neighborhood are Speer Boulevard on the west and south, Broadway on the east, and Colfax Avenue on the north. 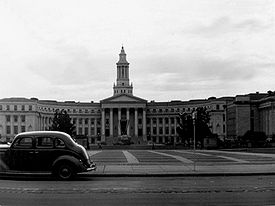 This picture of the City and County Building taken around 1941 shows how the park has changed over the years.

Civic Center was an idea that originated with former Denver mayor Robert W. Speer. In 1904, Speer proposed a series of civic improvements based on the City Beautiful Ideas shown to him at the 1893 World Columbian Exposition in Chicago.

Speer hired Charles Mulford Robinson among others to develop plans for the area. Robinson proposed extending 16th Street to the Colorado State Capitol and to group other municipal buildings around a central park area. However, the plan was defeated in a 1907 election.

Undaunted, Speer gathered business leaders who brought in new ideas for the Civic Center including the creation of an east-west axial between the Colorado State Capitol, and swinging the north and south borders of the park into the city grid system.

These plans were stalled when in 1912, Speer was replaced as mayor. The new mayor brought in Frederick Law Olmsted, Jr. who was developing plans for Denver's mountain parks. His ideas include an informal grove of trees on the eastern edge of the park, and a lighted concert area.

When Speer was reelected in 1917, he re-pursued his ideas about the Civic Center, hiring Chicago planner and architect Edward H. Bennett, a protege of Daniel Burnham. Bennett combined the ideas of all of the previous plans, adding the Greek amphitheater, the Colonnade, the seal pond, and the realignment of Colfax Avenue and 14th Ave., around the park. The park officially opened in 1919.

Civic Center has long been the government, arts, history, and learning nexus of both the state of Colorado and the Denver Metropolitan Area. Among the institutions in the Civic Center are Denver Art Museum, and the Denver Public Library's Central Library along the parks south side, the Colorado State Capitol and the City and County Building of Denver along the east and west axis of the park, the Wellington E. Webb Municipal Office Building on the park's north side, and the Colorado History Museum and the Colorado State Judicial Building towards the southeast of the park. The Denver Mint lies immediately west of the Civic Center Park across the street from the City and County Building.

Civic Center has issues related with crime and poverty. Though much of the stereotypes imposed on the Civic Center regarding crime and homelessness have been found largely media-fueled, there continues to be concerns expressed over keeping the park drug-free and housing the homeless.

In 2003 Denver Mayor John Hickenlooper began an initiative to reduce the homeless population with a program that included the first "Ten year plan to end homeless" in the United States. A crackdown on drug-dealing and crime in the area has also been started lately.

Recently, City and County officials have proposed changes to make the area more accessible to the downtown population in the north and the museums towards the south. Some of these changes include adding newer pedestrian crossings, bus areas and kiosks. One proposal would put Colfax Avenue underground with a pedestrian plaza on top of the former street.

The area has seen a lot of new civic development, including the Denver Newspaper Agency (northeast of the park), the home of The Denver Post. Voters in 2004 approved a new Denver Justice Center, two blocks away from Civic Center Park. These new buildings will change the dynamic of the area with some[who?] people worrying that the architecture of the two buildings, especially the Justice Center, (which will have the city jail) will disrupt the historic design of the park. Denver hopes to alleviate these concerns by incorporating the buildings into the future Civic Center plan.

Civic Center is known throughout the state as the rendezvous for the largest and most important cultural and civic events. Being at the center of the state and local government institutions, Civic Center has become the place for political statement for various groups and individuals representing a variety of causes. It was Civic Center where the public held a vigil for the victims of Columbine High School massacre, and 9/11. Former presidential candidate and Denver native John Kerry made a 2004 campaign stop at Civic Center, and 2008 Democratic nominee Barack Obama gave a speech there on October 26, 2008 to more than 120,000 supporters.

Civic Center is also the location for many annual events. These include: