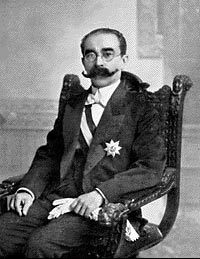 Victorino Márquez Bustillos (1858 - 1941), was n lawyer and politician, provisional between 1914&ndash;1922. Although was elected by Congress, , remained the real power behind the presidency.

Márquez Bustillos was born in , Portuguesa state, in 1858, were his parents Victorino Márquez and Virginia Bustillos, was married to "Enriqueta Iragorry Briceño". Initiated his career in Trujillo, under the direction of the s Juan Bautista Araujo and Leopoldo Bautista. Also, was editor in chief of the daily "El Trujillano" between 1877 and 1887, and a delegate for Andes state in 1890. In 1892, in spite of being the provisional president of that state, and second cousin of Raimundo Andueza, he united to the "Revolución Legalista" (Legalist Revolution) commanded by , who in 1893 promotes him as brigadier general.

From 1902 to 1904, he evolves as the secretary of government of Trujillo state, in addition of being delegate for the Trujillo district in the Assembly of that state between 1904 and 1906, and secretary of government of Zulia state in 1909. In 1910, as provisional president of the Trujillo state, distanced from Leopoldo Bautista, who refused to ratify Bustillos in that position. Later, becomes senator for Trujillo state (1910&ndash;1914), governor of the Federal District () (1911&ndash;1912) and Minister of Army (1913&ndash;1914). In , 1914, is elected by the Congress as President of Venezuela for the period 1915&ndash;1922, but decides not to assume the Presidency, remaining in as Commander-in-Chief of the army. Before these circumstances, Márquez, is designated as provisional president for a seven years period.

As a result of this, experienced an exceptional situation, having 2 presidents: Victorino Márquez, the provisional president who governs at and Juan Vicente Gómez, the elected president, who resided in . During this time Márquez would inform Gómez about all the details of the administration and subordinate any decision to him. The permanence of Márquez in the provisional presidency brought intrigues against him during Gómez's health problems in 1921. In 1924 is considered as diplomat for Vatican City, but personal problems not let him presenting credentials. In 1935, is designated secretary of president , but before the pressure of "antigomecistas" (oppositors to Gómez dictature), resigned in a few months. In 1918 was incorporated as a member of the Academy of Political Sciences.

Victorino Márquez died in on , .