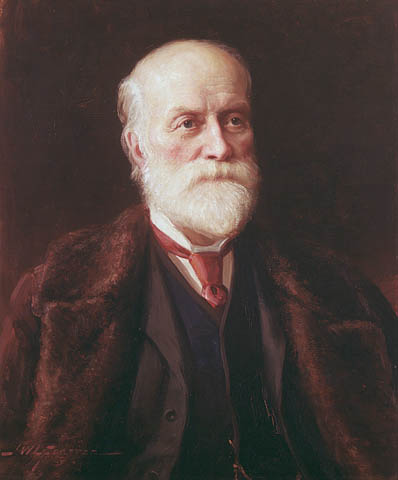 Sir Sandford Fleming (January 7, 1827 – July 22, 1915) was a prolific Scottish-born Canadian and , known for introducing Universal Standard Time and Canada's , a huge body of and map making, engineering much of the and the , and a founding member of the and founder of the , a science organization in .

Fleming was born in , , and in 1845, at the age of 17, he emigrated with his older brother David to (then the western half of the British province of ). Their route took them through much of the Canadian colonies, , , , before settling in with their cousins until 1847.

In 1849 he established the , which was formally incorporated on November 4, 1851. In 1851 he designed the "Threepenny Beaver", the first Canadian postage stamp. Throughout this time he was fully employed as a surveyor, mostly for the . His work for them eventually gained him the position as "Chief Engineer" of the in 1855, where he tirelessly advocated the construction of s instead of wood for safety reasons.

In 1858 he first proposed a coast to coast railway line spanning all of . The timing was not quite right, but a few years later he was appointed as the sole engineer to supervise the survey of the proposed Intercolonial Railway, linking the Maritime provinces with . He moved for a time to Halifax, during construction, where he built a house on the seaward end of town. In 1872 the newly formed Canadian government decided to build the rail link to the , and naturally the job of surveying the route fell to Fleming. That same year he organized an expedition to the Pacific that included surveyors as well as the naturalist , and his clergyman from the St. Matthew's Presbyterian "kirk" from Halifax, . Over the next few years he supervised both the Intercolonial and the , a job he completed in 1876 before turning over the chief engineer position to his long term collaborator, . Fleming was present when Donald Smith drove in the "Last Spike" in in 1885, now as a board member of the Canadian Pacific company. He published "The Intercolonial: A Historical Sketch" (1876).

After missing a train in 1876 in because its printed schedule listed p.m. instead of a.m., he proposed a single 24-hour clock for the entire world, located at the centre of the Earth and "not" linked to any surface meridian. At a meeting of the Royal Canadian Institute on February 8, 1879 he linked it to the anti-meridian of Greenwich (now 180°). He suggested that standard s could be used locally, but they were subordinate to his single world time. He continued to promote his system at major international conferences, including the of 1884. That conference accepted a different version of , but refused to accept his zones, stating that they were a local issue outside its purview. Nevertheless, by 1929 all of the major countries of the world had accepted time zones.

In 1880 he retired from the world of surveying, and took the position of Chancellor of Queen's University in , a position he held for his last 35 years, where his former Minister was principal from 1877 until Grant's death in 1902. Not content to leave well enough alone, he tirelessly advocated the construction of a submarine telegraph cable connecting all of the , the , which was completed in 1902. He was a . [ [http://freemasonry.bcy.ca/textfiles/famous.html A few famous freemasons] ] In his later years he retired to his house in Halifax, later deeding the house and the 95 acres (38 hectares) to the city, now known as (Dingle Park). He also kept residence in , and was buried there, in the .

His accomplishments were well known world wide, and in 1897 he was ed by Queen Victoria. Fleming Hall was built in his honour at Queen's in 1901, and rebuilt after a fire in 1932. It was the home of the university's Electrical Engineering department.

In , , a Community College of Applied Arts and Technology bearing his name, was opened in 1967, with additional campuses in Lindsay/Kawartha Lakes, Haliburton, and Cobourg. Also, a building in the is named after Fleming (Sandford Fleming building). It belongs to the .