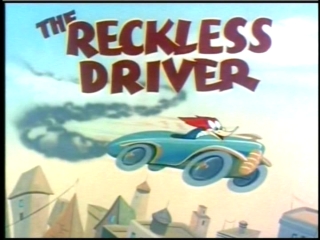 "The Reckless Driver" is the 19th in the "" series. Released theatrically on , , the film was produced by and distributed by Universal Pictures.

Woody discovers that his drivers' license is due for reneweal, and quickly heads for the nearest . Upon arrival, Woody attempts to awaken sleeping Officer (voiced by ) so he can complete the test.

First up is the eye test, complete with an eye chart whose letters spell out "I CAN'T SEE A THING." Then comes the reflex test, in which Woody violently pecks as Wally's head whenever he gets his knee jabbed. Next, Wally tries to get a fingerprint from Woody, only to have the two stack their hands high into the air.

Finally, Woody must complete the actual driving test. The careless woodpecker accidentally backs up into a wall. A then falls off the wall and onto the back of Woody's car, providing him with steam propulsion. With this new power, Woody starts zooming in the air and in and out of the office, driving Wally insane. At the conclusion of the driving test, Woody blurts out, "Say, I've changed my mind. I want a pilot's license!"

The normally Swedish Wally Walrus sports a New York accent in this film. replaced in supplying the voice of the walrus as well.