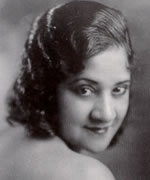 Eveleyn Preer (, –, ) was a notable pioneering stage and screen and accomplished blues of the 1910s through the early 1930s.

Born Evelyn Jarvis in , , she migrated with her mother to Chicago when her father died prematurely. Upon completing high school Evelyn began her career in early and before beginning her critically lauded professional association with , the African-American film director dubbed the "Father of Afro-American Cinema".

Preer's first film role was in Micheaux's 1919 debut effort "". As his premier leading actress, Micheaux heavily promoted Preer with a steady tour of personal appearances and a publicity campaign. Many of Micheaux's subsequent films were vehicles designed to showcase Preer's extraordinary versatility; Preer was lauded by both the black and white press for her ability to continually succeed in ever more challenging roles and refusing to play roles that she believed demeaned African-Americans. Her most well known role is in her only known surviving Micheaux film appearance, 1919's "".

In 1920, Evelyn Preer joined The Lafayette Players, a theatrical stock company founded in 1915 by another pioneering stage and film actress , who was known as “The Little Mother of Black Drama.” Bush and her acting troupe brought legitimate theatre to black audiences throughout the U.S. While the troupe was based in Chicago, Preer met her future husband, fellow Lafayette Player Edward Thompson. They married in in 1924 while on a Southern tour.

In the mid-1920's Evelyn Preer began garnering much attention from the white press and began making a foray into "crossover" films and stage parts. In 1926, she had a successful stint on Broadway in ’s production of "". Preer supported and understudied actress in the leading role of ’s steamy drama of a prostitute. She won further acclaim as Sadie Thompson on the West Coast in a revival of ’s fallen woman , "" in 1928.

A 1930 race musical "", presented Preer in her feature "" debut. In 1931 Preer performed onscreen opposite actress in the film "Ladies of the Big House". Her final film performance was the minor role of a prostitute named Lola in 's 1932 film "", opposite and .

Preer was also an accomplished vocalist and during stints in and was occasionally backed by such legendary and diverse musicians as and .

In April 1932, Preer gave birth to her only child, Edeve Thompson. She developed post-parturition complications and died of double on , in , aged 36.

Her husband, Edward Thompson continued as a popular leading man and heavy in numerous films throughout the 1930s and 1940s and died in 1960.