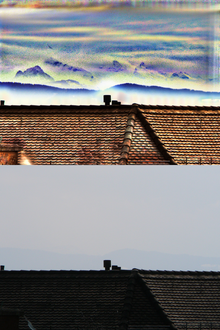 Registering and summing multiple exposures of the same scene improves signal to noise ratio, allowing to see things previously impossible to see. In this picture, the distant Alps are made visible, although they are tens of kilometers into the haze.

Image registration is the process of transforming different sets of data into one coordinate system. Data may be multiple photographs, data from different sensors, from different times, or from different viewpoints.[1] It is used in computer vision, medical imaging, military automatic target recognition, and compiling and analyzing images and data from satellites. Registration is necessary in order to be able to compare or integrate the data obtained from these different measurements.

Spatial methods operate in the image domain, matching intensity patterns or features in images. Some of the feature matching algorithms are outgrowths of traditional techniques for performing manual image registration, in which an operator chooses corresponding control points (CPs) in images. When the number of control points exceeds the minimum required to define the appropriate transformation model, iterative algorithms like RANSAC can be used to robustly estimate the parameters of a particular transformation type (e.g. affine) for registration of the images.

Frequency-domain methods find the transformation parameters for registration of the images while working in the transform domain. Such methods work for simple transformations, such as translation, rotation, and scaling. Applying the Phase correlation method to a pair of images produces a third image which contains a single peak. The location of this peak corresponds to the relative translation between the images. Unlike many spatial-domain algorithms, the phase correlation method is resilient to noise, occlusions, and other defects typical of medical or satellite images. Additionally, the phase correlation uses the fast Fourier transform to compute the cross-correlation between the two images, generally resulting in large performance gains. The method can be extended to determine rotation and scaling differences between two images by first converting the images to log-polar coordinates. Due to properties of the Fourier transform, the rotation and scaling parameters can be determined in a manner invariant to translation.

There is a level of uncertainty associated with registering images that have any spatio-temporal differences. A confident registration with a measure of uncertainty is critical for many change detection applications such as medical diagnostics.

In remote sensing applications where a digital image pixel may represent several kilometers of spatial distance (such as NASA's LANDSAT imagery), an uncertain image registration can mean that a solution could be several kilometers from ground truth. Several notable papers have attempted to quantify uncertainty in image registration in order to compare results.[3][4] However, many approaches to quantifying uncertainty or estimating deformations are computationally intensive or are only applicable to limited sets of spatial transformations.

Medical image registration (for data of the same patient taken at different points in time such as change detection or tumor monitoring) often additionally involves elastic (also known as nonrigid) registration to cope with deformation of the subject (due to breathing, anatomical changes, and so forth). Nonrigid registration of medical images can also be used to register a patient's data to an anatomical atlas, such as the Talairach atlas for neuroimaging.

It is also used in astrophotography to align images taken of space. Using control points (automatically or manually entered), the computer performs transformations on one image to make major features align with a second image.

Image registration is essential part of panoramic image creation. There are many different techniques that can be implemented in real time and run on embedded devices like cameras and camera-phones.