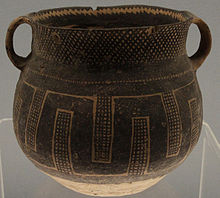 Painted pottery jar from the Majiayao culture, c 3100-2700 B.C. On display at the Shanghai Museum. 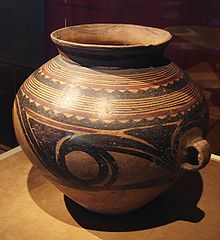 The Majiayao culture (馬家窰文化) is a name given by archaeologists to a group of Neolithic communities who lived primarily in the upper Yellow River region in eastern Gansu, eastern Qinghai and northern Sichuan,[1] China. The culture existed from 3100 BC to 2700 BC. Some of the earliest discoveries of copper and bronze objects in China occur at Majiayao sites.

The transition from Yangshao to Majiayao coincides, climatically, with the Piora Oscillation.[citation needed]