Asa Branca is a song written by Luiz Gonzaga and Humberto Teixeira in 1947. It has been covered by Zé Ramalho in his 2003 album Estação Brasil, also see Forro in the Dark with David Byrne. It is about the droughts that often afflict the sertão of the Brazilian Northeast: 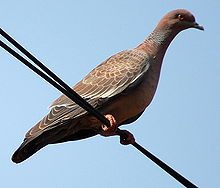 The picazuro pigeon, called pomba-asa-branca or white-winged dove in Portuguese.

The asa-branca ("white wing") of the title is the picazuro pigeon[1]. With its departure the desolation of the parched sertão is complete, and the protagonist of the song, unable to make a living, must leave the sertão and his lady-love Rosinha. The song closes with his promise to return: