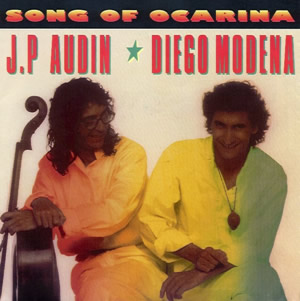 "Song of Ocarina" is the name of a 1991 song recorded by the s Jean-Philippe Audin and Diego Modena. It is entirely instrumental and is played on by Modena and by Audin. Released as first single from the album "Ocarina", it achieved a huge success in , topping the chart, and becoming in this country the first instrumental number-one hit.

This song was composed by Paul De Senneville who had already written several pop songs in the 1980s for the band Pop Concerto Orchestra.

In this instrumental duet, "the cello and the ocarina compete in expressiveness on a swinging rhythmic". The ocarina "gives to the song a thin and air tone which makes us travel in the Andean heights", while the cello "adds to the music a melancholic touch and the depth of the notes of [the] ".