The Accüsed is a crossover thrash band from Seattle, WA, founded in 1981. They are considered to be an important progenitor of the crossover style that bridged the gap between thrashcore and thrash metal, later influencing grindcore and some crust punk bands; as well as an influential band in the Seattle alternative scene. The band calls their music "splattercore", and their zombie mascot Martha Splatterhead appears on most of their albums. Common themes involve social issues and Martha Splatterhead coming back from the dead to slaughter rapists and child molesters. The Accüsed took an 11 year hiatus in 1992, with members taking time to play in Seattle bands such as The Fartz and Gruntruck. The band reformed in 2003, and continues to be active.[1]

The Accüsed formed in 1981 in Oak Harbor, Washington by bassist Chibon 'Chewy' Batterman, drummer Dana Collins and guitarist Tommy Niemeyer. John Dahlin was the vocalist from 1982 to 1984. The band's first two demo cassettes and their album Please Pardon Our Noise, It Is the Sound of Freedom in 1983 drew heavily from hardcore punk. In 1984 The Fartz vocalist Blaine Cook replaced Dahlin.

In 1984 the band began adopting metal into their sound and dubbed their style "splatter rock", in homage to their favorite genre of horror films. According to a review, "Their hybrid musical formula was distinguishable by Cook's unusual choking-sound vocals, Niemeyer's muted, choppy, buzzsaw guitars, dark metallic riffs, and Dana Collins rapid-fire, double-kick drumming."[1] The band also created the zombie mascot Martha Splatterhead, whose likeness (created by Niemeyer) adorns most of their albums and many of their promotional items. A recurring theme in the band's lyrics involve Martha Splatterhead coming back from the dead to eviscerate and slaughter rapists and child molesters.

They released their first full EP, Martha Splatterhead, in 1985 on their own Condar label. Their first full-length LP was The Return of Martha Splatterhead, released on SubCore Records in 1986. According to reviewer Jeb Branin, "I was writing for a zine in Canada called Northern Metal that reviewed The Return Of Martha Splatterhead giving it a 0.0 rating and absolutely crucifying it in the review. It is the only 0.0 review I remember ever seeing in Northern Metal. They hated it so much I knew I had to buy it. As I suspected, the album was a masterpiece of hardcore hysteria."[2]

The LPs More Fun Than an Open Casket Funeral and Martha Splatterhead's Maddest Stories Ever Told quickly followed, as well a number of other annual releases. Starting with Hymns For the Deranged, the band also began working with Seattle producer Jack Endino, and their next album, Grinning Like An Undertaker, was released on Sub Pop. 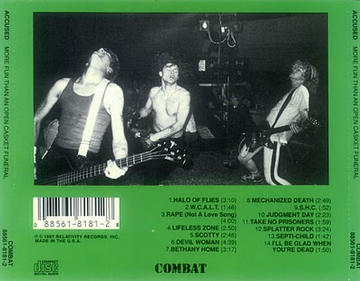 Band picture from the CD of More Fun Than An Open Casket Funeral, 1987

The band maintained an active touring schedule, and according to a review, "Live The Accused were untouchable. The whole band was a frenzy of epileptic gyrations, although Blaine's high flying leaps and bouncing off the walls like a deranged gnome were definitely the highlight. Even in today's underground you aren't going to find a more devastating band than The Accused."[2]

The Accüsed took an 11 year hiatus in 1992, with members taking time to play in Seattle bands such as The Fartz and Gruntruck.

The band reformed in 2003, playing live shows in the Seattle area, then releasing the album Oh, Martha! on their own CONDAR Records label. This "comeback record" landed on Revolver Magazine's Top Ten albums of the year and Writer's Lists from Metal Maniacs magazine. Oh, Martha! followed the tradition of many earlier releases by The Accused in that it featured a track with a guest lead singer. In this case guitarist Tommy Niemeyer sang lead vocals on the angry track "13 Letters", though no lead vocal credit was printed on the album. The reunion line-up was short-lived, and members reformed in 2006. 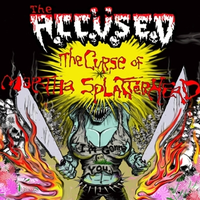 The Curse of Martha Splatterhead, 2009

In a 2009 interview with Rock-A-Rolla, Tom Niemeyer stated that Mike Patton of Mr. Bungle was approached for the role of vocalist, but he declined due to being "totally booked up". Patton then suggested Brad Mowen, who went on to be the band's vocalist for some time.[3] The new line-up consisted of Kevin Cochneuer on vocals, Dorando Hodous on drums and Tommy Niemeyer on guitar. The re-vamped line-up released two new songs, "Scotty Came Back" and "Fuck Sorry," January 26, 2007, via their official website as free mp3s. The album received critical praise, forcing Southern Lord Records into a hasty 2nd-pressing of the CD title only weeks after its release. In 2009, the band released their sixth full LP, The Curse of Martha Splatterhead,[4] also received well. In 2010, the band was confirmed as being part of the soundtrack for Namco Bandai Games' 2010 remake of Splatterhouse.[5] The band continues to tour and perform.

The out-of-print back-catalog of The Accused's albums has been sporadically-re-issued on various labels over recent years; a move prompted in part by the fact that many collectors of memorabilia by The Accused were seeing copies of the rare/out-of-print U.S. made CDs fetch hundreds of dollars each on popular auction website eBay.

The Accused is considered to be an important progenitor of the crossover style that bridged the gap between thrashcore and thrash metal, later influencing grindcore and some crust punk bands. It was also considered an influential band in the Seattle alternative scene, notably grunge, and is a key band in the development of metalcore. Despite being frequently cited as an influence by other punk and metal bands, The Accused has largely remained in the underground. According to Sputnik Music, "It's a shame really [that] the Accused aren't recognized in the metal music industry as being one of the pioneering members of crossover thrash. These boys deserve more attention than they get."[1]