Des Plaines Valley Council is a Boy Scouts of America local council headquartered in La Grange, Illinois, United States. It was formed through the merger of West Suburban Council and Thatcher Woods Council in 1993. The council operates Camp Shin-Go-Beek near Waupaca, Wisconsin and Camp Mach-Kin-O-Siew near Elcho, Wisconsin. The council operates The BSA Adventure Camp in Rochelle, Illinois in a joint venture with Three Fires Council. The council sold Camp Tomo-Chi-Chi-Knolls in Huntley, Illinois to the Kane County Forest Preserve District as of January 1, 2007. Des Plaines Valley Council is served by Pachsegink Lodge. 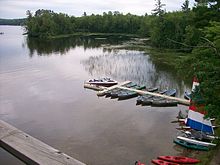 The boats owned by the camp viewed from Mach's "Stairway to Heaven" lookout tower.

The camp operates two weeks a year, from the last week of July to the first week of August. Scout troops stay for 7 days at a time, checking in Sunday, checking out Saturday.

Major parts of the camp's program are its merit badge classes. A wide range of merit badges are offered. Other activities include hiking, fishing, a bog hike,[5] boating, rifle, shotgun, climbing, swimming and livesaving.[6]

Mach's facilities include a waterfront area, a field sports area (comprising rifle, shotgun, and archery ranges), thirteen campgrounds, several piers, a campfire bowl, a climbing tower, a forge , a water slide, a shower house, and a chapel.[4] However, the camp has no dining hall, so the Scouts cook all their meals with supplies provided by the camp (except for the first and last dinners.)[5]

The extensive waterfront area is located on a beach along Enterprise Lake. It consists of a large swimming area, a lookout tower (known as "Gloria" ), a boat dock,[4] and a water slide.[7] The camp owns a fleet of boats, consisting of kayaks, sunfish class sailboats, catamarans, an inboard motorboat for waterskiing, an outboard motorboat, rowboats, canoes, a dinghy, and sailboards. The camp also has two smaller lakes "Big Apple" and "Little Apple" within its borders.

Because the Boy Scouts of America maintains a "Leave No Trace" philosophy, the Scouts that attend Camp Mach attempt to preserve the camp's natural environment. The only island in Enterprise Lake is owned by the camp.[4] It is maintained as a wildlife sanctuary, therefore no person can set foot on the island. Other natural features include two small lakes, a bog, and a marsh.[4]

Camp Shin-Go-Beek is located near Waupaca, Wisconsin on Big Twin and Little Twin lakes. The camp is close to the chain-of-lakes area of central Wisconsin, the Crystal River and Shadow Lake (used for camp canoe trips), and many outdoor recreation areas including the Wolf and Fox Rivers. The small hamlets of the area are just waiting for camp staff members to discover another excellent eatery or a well stocked hardware store while meeting the local residents. College towns of Oshkosh, Appleton, and Steven's Point are nearby. The camp is serviced by Order of the Arrow Pachsegink Lodge.

Both Cub Scouts and Boy Scouts use Camp Shin-Go-Beek. The camp operates for several weeks in late June and early July, then the staff moves to Camp Mach-Kin-O-Siew for two weeks.

The camp offers prepared meals, a waterfront for swimming, an archery range, a shooting range with new shelter, an amazing observatory with refracting telescope, handicrafts, pioneering exercises, and an Order of the Arrow call-out ceremony every week. The Lodge uniquely provides for the elected to undergo their ordeal during their camp week.

Camp Shin-Go-Beek (a native American word for scrubby pine trees) is kept in a mostly natural state. All alterations to the existing property are done with extreme care. The crafts area of Camp Shin Go Beek is made entirely with lashings and remains in a completely natural state. The camp is home to chipmunks, deer, coyotes, and many endangered birds, such as the bald eagle, the sandhill crane, and the blue heron.

A concern of the camp is the fact that Little Twin Lake has completely dried up. The water level in Big Twin Lake has also dropped noticeably. However, this cycle of the twins is not completely without precedent as little twin was nearly dry in the early 60s and called by the campers "Bounce Land." The nickname was both a tribute to the bouncy feel of the lake bed, but also a tongue in cheek reference to a trampoline amusement park in Melrose Park, IL.

The camp has a rich heritage having been in constant service since 1948. With a foot in two states, Illinois Scouts who have camped at Shin-Go-Beek for those sixty years are quick to point out the amazing things they accomplished and the wonderful brother Scouts the met in a camp week. For older Scouts who became members of the dedicated, knowledgeable, and mature camp staff, they learned leadership and explored new horizons in Wisconsin while learning the very best of legend and lore of one the midwest's very best youth camps.