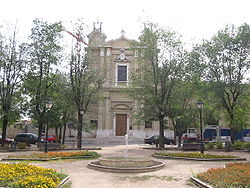 The Convent of San Pascual is a royal monastery in Aranjuez, Spain, founded by King Charles III of Spain as a Franciscan monastery and built from 1765 to 1770. Under the reign of Isabel II of Spain, it was assigned to the Conceptioninst nuns, and now is under the administration of the Patrimonio Nacional.

The architect was the Italian Francesco Sabatini. The main altar has a painting by Anton Raphael Mengs.