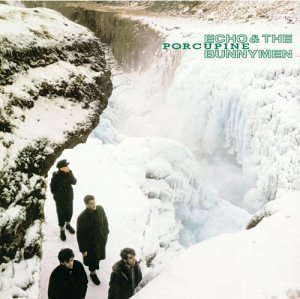 "Porcupine" is the third by the British band . First released on 4 February 1983, it became the band's highest charting release when it reached number two on the despite initially receiving poor reviews. It also reached number 137 on the U.S. "Billboard" 200, number 85 on the Canadian "RPM" 100 Albums and number 24 on the Swedish chart. In 1984 the album was certified gold by the . "Porcupine" included the singles "" and "The Cutter".

The album was recorded at in , in and Amazon Studios in . It was produced by , who was credited as "Kingbird" and who had co-produced the band's first album, 1980's "Crocodiles", and their second single, "Rescue". After being rejected by the band's label, the album was re-recorded with Shankar providing strings. It was originally released as an LP in 1983 before being d on CD in 1988. The album was again reissued on CD in 2003, along with the other four of the band's first five studio albums, having been ed and expanded. A video called "Porcupine – An Atlas Adventure" was also released containing six promotional videos of tracks from the album.

Following the release of "" in 1981, Echo & the Bunnymen had difficulty writing new material for their next album despite rehearsing five days each week at The Ministry, their rehearsal room in Liverpool.

On 27 January 1982 Echo & the Bunnymen recorded their fourth session for British disc jockey 's radio show on . Of the tracks recorded, "Smack in the Middle" was renamed and became "Higher Hell" on the album, while "Taking Advantage" was renamed "The Back of Love" and became the band's third single which was also included on the album. , who had co-produced 1980's "" and who was Sergeant's flat-mate, was chosen to produce "The Back of Love" and the band's third album, whose working title was "The Happy Loss".

Following the release of "The Back of Love" on 21 May 1982, the band spent the summer, first playing at the inaugural WOMAD festival, and then playing at various European music festivals. After the summer the band resumed recording the album at in – which had been used for the band's first two albums – and also at Amazon Studios in Liverpool. Recording the album was a slow process, de Freitas said, "Porcupine" was very hard to actually write and record [...] "Heaven Up Here" was pure confidence, we did it really quickly; we had a great time doing it – but this one was like we had to drag it out of ourselves." McCulloch later said that when recording the album, the mood between the band members was "horrible".

When presented with the finished album, WEA rejected it as "too uncommercial".

After Echo & the Bunnymen had finished recording "Porcupine" they played a free show in early November 1982 for formatnum:20000 people at in Liverpool. Following this, WEA asked for three s and album art for the new album. The band's lighting engineer Bill Butt was chosen to direct the videos and Brian Griffin was chosen to take the photographs for the album's cover – as he had done for the band's two previous albums. With a budget of £formatnum:16000 Butt decided that it would be possible to get the photographs for the album cover and also to produce a half-hour film.

Filming took place on and near the frozen waterfall near . Feeling it was a dangerous process, McCulloch said in 1993, "If we had slipped there wasn't anything for hundreds of feet below us." In 2001 Griffin said, " [...] the sun barely appeared the whole time we were there. To walk, stand up, or just think seemed a massive effort." Despite the danger the filming proved its worth when the British music magazine "Q" said in 2001, "The "Porcupine" cover is the epitome of rock band as heroic archetype – young men on some ill-defined but glorious mission, one easily as timeless as the stars and the sea."

After WEA rejected the first version of the album, Shankar – who had played strings on "The Back of Love" – was brought back by Drummond to add strings to the remainder of the album in an effort to give it a brighter production and to build on the success of the strings used on the single. When recording "The Cutter", Sergeant had asked Shankar if he could suggest the from ' 1967 hit "".

In 1984 McCulloch said, "I think "Porcupine" was a classic autobiographical album, the most honest thing that I'd ever written or sung."

"Porcupine" was first released as an LP by Korova in the on 4 February 1983. It was subsequently released in the by on 23 February 1983. The original album had ten tracks with five tracks on each side. Like Echo & the Bunnymen's previous album, the was designed by Martyn Atkins and the was by Brian Griffin.

Along with the other four of the band's first five albums, "Porcupine" was ed and d on CD in 2003 – these releases were marketed as 25th anniversary editions. Seven were added to the album: "Fuel" was the second B-side track on the 12-inch version of ""; alternate versions of "The Cutter", "My White Devil", "Porcupine", "Ripeness" and "Gods Will Be Gods" which were all early versions recorded during the album's sessions; and "Never Stop (Discotheque)" the 12-inch version of the non-album single which was released after "Porcupine".

Following the release of "Porcupine" in 1983, "" reviewer gave the album a negative review. Hoskyns wrote, "Porcupine" is the distressing occasion of an important and exciting rock group becoming ensnared by its own strongest points, a dynamic force striving fruitlessly to escape the brilliant track that trails behind it." Hoskyns likened the sound of the album to the band "turning on their own greatest 'hits' and savaging them". Hoskyns also criticised McCulloch's lyrics and the general mood of the album, noting, "Only on 'Porcupine' itself do the various strains of despair coalesce", and dismissd the entire second side of the album, saying it "horrifies the more for its uniform lack of inspiration, for the fact that every number cops direct from earlier songs without preserving anything of their energy or invention".

All tracks written by , Ian McCulloch, and .