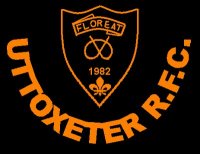 Uttoxeter Rugby Football Club is an English club that plays in the Midlands Division.

Uttoxeter began the 1982/83, with the majority of the former JCB players now playing at , in Uttoxeter, where they remain to this day.

Initially the Club ran three senior teams. They played their matched at either Oldfields Hall Middle School or on a field belonging to Fred Allen at the rear of the Shell Mex depot, on the Dovefields Industrial Estate, but were invited to use Oldfields Sports and Social Clubs facilities post match.

Eventually they acruired a pitch at Oldfields Sports and Social club despite objections from Soccer and Cricket players who were already operting teams at Oldfields.

Recently the club has acquired the use of a second pitch adjacent to the Uttoxeter Leisure Centre. The Club now has a vibrant Youth Section, from tag to under 18 level.

The Club has won the four times, including the 2006/7 competition.

The club plays its home games at .The club makes use of a second pitch which is known as which is adjacent to Uttoxeter Leisure Centre