/məˈriːbə/)[2] is a town on the Atherton Tableland in Far North Queensland, Australia. The town is 417 metres (1,368 ft) above sea level on the confluence of the Barron River, Granite Creek and Emerald Creek. The town's name is derived from an Aboriginal word meaning meeting of the waters.[3] At the 2006 census, Mareeba had a population of 6,806.[1]

Prior to European settlement, the area around Mareeba was inhabited by the Muluridji people. They maintained a hunter/gatherer existence in the area between Mount Carbine, Mareeba, Rumula and Woodville, mainly concentrated between Bibhoora and Mount Molloy. In the local Aboriginal language, Mareeba means meeting of the waters - referring to the point at which the Barron River is joined by Granite Creek.

On 26 May 1875 James Venture Mulligan became the first European officially to see the future site of Mareeba when he rode up the eastern bank of the Barron River, and passed the junctions of Emerald Creek and Granite Creek.

The Mareeba area was first settled by Europeans in 1877 by John Atherton, who arrived with cattle at Emerald End, which is just north of the town today. Mareeba quickly became a busy coach stop for Cobb & Co on the road from Port Douglas to Herberton. When the railway arrived in 1893, Mareeba grew into a busy town.

From 1942 to 1945, up to 10,000 Australian and US service personnel used Mareeba Airfield as a staging post for battles in New Guinea and the Pacific. The Americans referred to it as Hoevet Field in honour of Major Dean Carol "Pinky" Hoevet who was killed on 16 August 1942. Units that were based at Mareeba during World War II included No. 5 Squadron RAAF, No. 100 Squadron RAAF, the Australian 33rd Light A-A Battery, 19th Bomb Group USAAC, 43rd Bomb Group USAAC and 8th Fighter Group USAAC.

Mareeba is fast becoming known for its horticulture industries. Numerous crops are grown throughout Mareeba Shire, including avocados, mangoes, lychees, longans, sugar cane, cashews, macadamias, pineapples, tea tree, coffee, and a variety of vegetables and tropical fruits. Poultry and cattle are also common. Tobacco, once a main-stay of the local economy, is no longer grown within the Mareeba shire, although Chop Chop was a problem[4].

Tourism is also contributing to the local economy.

The Lotus Glen Correctional Centre is located in Mareeba.

Mareeba has two primary schools, two secondary schools and a TAFE campus. There are also several day care centres in the town.

Mareeba Hospital is in the Tablelands Health District. It provides 52 beds, with surgical, maternity, paediatric, outpatient, emergency and x-ray facilities.

Both the Mareeba Karting Club and the Far North Queensland Motorcycle club hold monthly race meetings at the Makotrac International Racetrack which is located five kilometres from Mareeba.

The Mareeba Rodeo takes place over a weekend each July. The first rodeo was held 1949 at Davies Park (which is now the home ground of the Gladiators Rugby League team). On the Friday night, there is a parade through the town, and the Rodeo Princess is crowned (the first Princess was crowned in 1959). Over the rest of the weekend the rodeo proper is held at Kerribee Park. A ute muster is often staged over the same weekend as the rodeo.[6]

Mareeba is serviced by the following radio stations: 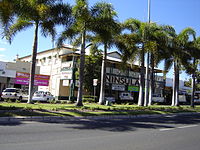 Mareeba has representatives from a large number of religions and has as many places of worship, including the region's only mosque.

Each year, on the first Sunday of September, St Thomas's Catholic Church celebrates the Feast of Our Lady of the Chain. The celebration begins with a procession through various streets of Mareeba and culminates in a fireworks display.