Mikis (Michael) Theodorakis (Greek: Μίκης Θεοδωράκης, pronounced [ˈmicis θeoðoˈracis]) (born July 29, 1925) is one of the most renowned Greek songwriters and composers. Internationally, he is probably best known for his songs and for his scores for the films Zorba the Greek (1964), Z (1969), and Serpico (1973).

Politically, he identified with the left until the late 1980s; in 1989, he ran as an independent candidate within the centre-right New Democracy party in order for the country to come out of the political crisis that had been created due to the numerous scandals of the government of Andreas Papandreou[1] and helped to establish a large coalition between conservatives, socialists and leftists. In 1990 he was elected to the parliament (as in 1964 and 1981), became a government minister under Constantine Mitsotakis, and fought against drugs and terrorism and for culture, education and better relations between Greece and Turkey. He continues to speak out in favor of left-liberal causes, Greek-Turkish-Cypriot relations, and against the War in Iraq.[2][3] He has consistently opposed oppressive regimes and was the key voice against the Greek Junta 1967-1974, which imprisoned him.[4]

Mikis Theodorakis was born on the Greek island of Chios and spent his childhood years in different provincial Greek cities such as Mytilene, Cephallonia, Patras, Pyrgos and Tripoli. His father, a lawyer and a civil servant was from Galata (Crete) and his mother from Cesme (Asia Minor).

Theodorakis's fascination with music began in early childhood; he taught himself to write his first songs without access to musical instruments. In Patras[5] and Pyrgos[6] he took his first music lessons, and in Tripoli, Peloponnese,[7] he gave his first concert at the age of seventeen.

He went to Athens in 1943, and became a member of a Reserve Unit of ELAS.[8] During the Greek Civil War, he was arrested, sent into exile on the island of Icaria[9] and then deported to the island of Makronisos, where he was tortured and twice buried alive.[10]

During the periods when he was not obliged to hide, not exiled or jailed, he studied from 1943 to 1950 at the Athens Conservatoire under Filoktitis Economidis,.[11] In 1950, he finished his studies and took his last two exams "with flying colours".[12] He went to Crete, where he became the "head of the Chania Music School" and founded his first orchestra.[13] At this time he ended what he has called the first period of his musical writing.

In 1954 he travelled with his young wife Myrto Altinoglou to Paris where he entered the Conservatory and studied musical analysis under Olivier Messiaen[14] and conducting under Eugene Bigot.[15] His time in Paris, 1954–1959, was his second period of musical writing and a time of intense artistic creation.

His symphonic works: a Piano concerto, his first suite, his first symphony, and his scores for the ballet: Greek Carnival, Le Feu aux Poudres, Les Amants de Teruel, received international acclaim. In 1957, he won the Gold Medal in the Moscow Music Festival; President of the Jury was Dmitri Shostakovitch. In 1959, after the successful performances of Theodorakis's ballet Antigone at Covent Garden in London, the French composer Darius Milhaud proposed him for the American Copley Music Prize - an award of the "William and Noma Copley Foundation",[16] which later changed its name to "Cassandra Foundation" - as the "Best European Composer of the Year". His first international scores for the film Ill Met by Moonlight and Luna de Miel, directors: Michael Powell and Emeric Pressburger, were also very successful: The Honeymoon title song became part of the repertoire of The Beatles.

Back to Greek roots 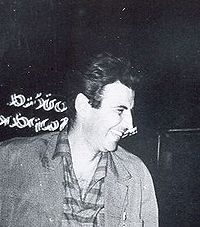 Mikis Theodorakis shortly after his return to Greece, 1961.

In 1960, Theodorakis returned to Greece and his roots in genuine Greek music: With his song cycle Epitaphios he started the third period of his composing and contributed to a cultural revolution in his country.[17] With his most significant and influential works based on the greatest Greek and world poetry – Epiphania (Giorgos Seferis), Little Kyklades (Odysseas Elytis), Axion Esti (Odysseas Elytis), Mauthausen (Iakovos Kambanellis), Romiossini (Yannis Ritsos), and Romancero Gitano (Federico García Lorca) – he attempted to give back to Greek music a dignity which in his perception it had lost. In developing his concept of "metasymphonic music" (symphonic compositions that go beyond the "classical" status and mix symphonic elements with popular songs, Western symphonic orchestra and Greek popular instruments), he quickly became recognised internationally, and won acclaim as "Greece's greatest living composer".

He founded the Little Orchestra of Athens and the Musical Society of Piraeus, gave many, many concerts all around Greece and abroad... and he naturally became involved in the politics of his home country. After the assassination of Gregoris Lambrakis in May 1963 he founded the Lambrakis Democratic Youth ("Lambrakidès") and was elected its president.[18] Under Theodorakis's impetus, it started a vast cultural renaissance movement and became the greatest political organisation in Greece with more than 50.000 members.[19] Following the 1964 elections, Theodorakis became a member of the Greek Parliament, associated with the left-wing party EDA.[disambiguation needed

] Because of his political ideas, the composer was black-listed by the cultural establishment; at the time of his biggest artistic glory, a large number of his songs were censored-before-studio or were not allowed on the radio stations.[20]

During 1964, he wrote the music for the Michael Cacoyiannis film Zorba the Greek, whose main theme, since then, exists as a trademark for Greece. It is also known as 'Syrtaki dance'; inspired from old Cretan traditional dances.

Main works of this period 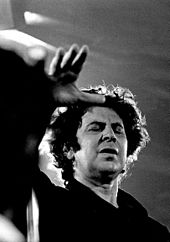 On 21 April 1967 a right wing junta (the Regime of the Colonels) took power in a putsch. Theodorakis went underground and founded the "Patriotic Front" (PAM). On 1 June, the Colonels published "Army decree No 13", which banned playing, and even listening to his music. Theodorakis himself was arrested on 21 August,[23] and jailed for five months. Following his release end of January 1968, he was banished in August to Zatouna with his wife Myrto and their two children, Margarita and Yorgos.[24] Later he was interned in the concentration camp of Oropos.[25] An international solidarity movement, headed by such personalities as Dmitri Shostakovich, Leonard Bernstein, Arthur Miller, and Harry Belafonte demanded to get Theodorakis freed. On request of the French politician Jean-Jacques Servan-Schreiber, Theodorakis was allowed to go into exile to Paris on 13 April 1970. Theodorakis's flight left very secretly from an Onassis owned private airport outside Athens. Theodorakis arrived at Le Bourget Airport where he met Costa Gavras, Melina Mercouri and Jules Dassin. Theodorakis was immediately hospitalized because he suffered from lung tuberculosis.[26] Myrto Theodorakis, Mikis's wife and two children joined him a week later in France. They arrived from Greece to France via Italy on a boat.[27]

Main works under the dictatorship

While in exile, Theodorakis fought during four years for the overthrow of the colonels. He started his world tours and gave thousands of concerts on all continents as part of his struggle for the restoration of democracy in Greece. 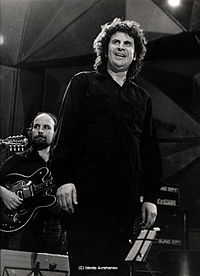 Mikis Theodorakis at a concert in Caesarea, Israel, in the 1970s.

He met Pablo Neruda and Salvador Allende and promised them to compose his version of Neruda's Canto General. He was received by Gamal Abdel Nasser and Tito, Yigal Allon and Yasser Arafat, while François Mitterrand,[29] Olof Palme and Willy Brandt became his friends. For millions of people, Theodorakis was the symbol of resistance against the Greek dictatorship.[30] 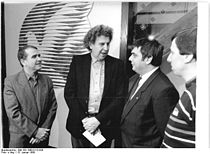 Theodorakis on a visit in East Germany, May 1989.

After the fall of the Colonels, Mikis Theodorakis returned to Greece on 24 July 1974 to continue his work and his concert tours, both in Greece and abroad.[31] At the same time he participated in public affairs. In 1978, through his article For a United Left Wing, he had "stirred up the Greek political life. His proposal for the unification of the three parties of the former United Left – which had grown out of the National Liberation Front (N.L.F.) – had been accepted by the Greek Communist Party which later proposed him as the candidate for mayor of Athens during the 1978 elections." (Andreas Brandes)[32] He was later elected several times to the Greek Parliament (1981–1986 and 1989–1993) and for two years, from 1990 to 1992, he was a minister in the government of Constantine Mitsotakis. After his resignation as a member of Greek parliament, he was appointed General Musical Director of the Choir and the two Orchestras of the Hellenic State Radio (ERT),[disambiguation needed

] which he reorganised and with which he undertook successful concert tours abroad.[33]

Theodorakis has always combined an exceptional artistic talent with a deep love of his country. He is also committed to heightening international awareness of human rights, of environmental issues, and of the need for peace. It was for this reason that he initiated, together with the renowned Turkish author, musician, singer, and filmmaker Zülfü Livaneli,[34] the Greek–Turkish Friendship Society.[35]

From 1981, Theodorakis had started the fourth period of his musical writing, during which he returned to the symphonic music, while still going on to compose song-cycles. His most significant works written in these years are his Second, Third, Fourth and Seventh Symphony, most of them being first performed in the former German Democratic Republic between 1982 and 1989. It was during this period that he received the Lenin Peace Prize. He composed his first opera Kostas Kariotakis (The Metamorphoses of Dionysus) and the ballet Zorba the Greek, premièred in the Arena of Verona during the Festival Verona 1988, a ballet which has a tremendous success worldwide. During this period, he also wrote the five volumes of his autobiography: The Ways of the Archangel (Οι δρόμοι του αρχάγγελου).

In 1989, he started the fifth period, the last, of his musical writing: He composed three operas (lyric tragedies) Medea, first performed in Bilbao (1 October 1981), Elektra,[disambiguation needed

Theodorakis is Doctor honoris causa of several universities, including Montreal, Thessaloniki, and Crete, and was nominated by the Greek people for the Nobel Prize for Peace in 2000.

Now he lives in retirement, reading, writing, publishing arrangements of his scores, texts about culture and politics. On important occasions he still takes position: in 1999, opposing NATO's Kosovo war and in 2003 against the Iraq War. In 2005, he was awarded the Sorano Friendship and Peace Award, the Russian International St.-Andrew-the-First-Called Prize, the insignia of Grand Officer of the Order of Merit of Luxembourg, and the IMC UNESCO International Music Prize, while already in 2002 he was honoured in Bonn with the Erich Wolfgang Korngold Prize for film music at the International Film Music Biennial in Bonn[36] (cf also: Homepage of the Art and Exhibition Hall Bonn).[37] In 2007, he received a Lifetime Achievement Award at the distribution of the World Soundtrack Awards in Ghent.[38]

A final set of songs entitled: Odysseia was composed by utilizing poetry written by Costas Kartelias for lyrics. Created in 2007, Theodorakis achieved the distinction of producing one of the largest works by any composer of any time.[39]

Theodorakis is well-known for his support of left-liberal causes worldwide. He has spoken out against the Iraq and Israel's occupation of Gaza and the West Bank. Theodorakis has blasted Greek Prime Minister George Papandreou for establishing closer relations with Israeli Prime Minister Benjamin Netanyahu, who was guilty, he said, of "war crimes in Lebanon and Gaza."[40]

In December 1, 2010, Mikis Theodorakis founded "Spitha: People's Independent Movement", a non-political movement which calls people to gather and express their political ideas. The main goal of "Spitha" is to help Greece stay clear off its economical crisis.[41] On May 31, Mikis Theodorakis gave a speech among 10.000 Greeks in the centre of Athens, criticising the Greek government for the loan debt it has taken from the International Monetary Fund.[42] It was also the first time he called everyone to revolutionize.

Music for the stage

Reference: Guy Wagner. Chairman of the International Theodorakis Foundation FILIKI. List of works based on the research of Asteris Koutoulas, published in O Mousikos Theodorakis.

Books in Greek by Theodorakis