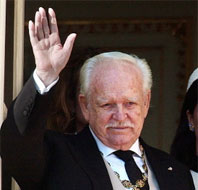 Rainier III, Prince of Monaco (Rainier Louis Henri Maxence Bertrand Grimaldi; &ndash; ), styled His Serene Highness The , ruled the of for more than 50 years, making him one of the longest ruling monarchs of the 20th century. Though he was best known outside of Europe for having married American actress , he was also responsible for reforms to Monaco's constitution and for expanding the principality's economy beyond its traditional base. Gambling accounts for approximately three percent of the nation's annual revenue today; when Rainier ascended the throne in 1949, it accounted for more than 95 percent. Before his death, he was the world's second-longest reigning monarch with his 56 years of reign.

Through his great-grandmother , who was briefly Princess of Monaco, he was a descendent of . His great-great-great-grandmother was , the adopted daughter of and later the Grand Duchess of Baden. Other ancestors include William Beckford, the ous 18th century English collector, tastemaker, writer, and eccentric. Rainier was also a descendent of Prince William "the Silent" of Orange-Nassau, the main leader of the Dutch revolt against the and ancestor to the current ; , the and mistress of King Charles II of England; Gabrielle de Polignac, a favorite of Queen Marie Antoinette of France; , the first ; King Charles IX of Sweden; King Frederick II of Denmark and Norway; ; and .

Rainier was born in Monaco, the only son of Prince Pierre of Monaco, Duke of Valentinois (né Count ) and his wife, Hereditary . Born in , his mother was the only child of Prince Louis II and ; she was later legitimized through formal adoption and subsequently named heiress to the throne of Monaco. His father was a half-French, half-Spanish nobleman from who adopted his wife's surname, Grimaldi, upon marriage and was made a prince of Monaco by his father-in-law.

Rainier had one sibling, HSH , an unpopular figure generally believed to be meddlesome enough regarding her children's place in the line of succession to have forced Princess Grace to demand that she leave the country.

Rainier was first sent to study at Summerfields School in , , [ [http://www.timesonline.co.uk/tol/news/world/article377941.ece Prince Rainier III of Monaco: The Times obituary] , "The Times", , . Accessed , .] and later at Stowe, a prestigious English public school in . From there, he went to the in and , , before continuing to the in , where he obtained a degree, and finally to the "Institut d'études politiques de Paris" in .

Rainier's maternal grandfather, Prince Louis II, had been a general in the French army during . During , Rainier served as an artillery officer in the army. As a , he fought so courageously during the German counter-offensive in that he won the and Bronze Star and was given the rank of Chevalier in the Legion of Honor.

On , Rainier became the Sovereign Prince of Monaco on the death of Prince Louis II, his mother having renounced her rights to the throne in his favor in 1944.

In the 1940s and 1950s, the prince openly lived with the French star (née Gisèle Tallone, 1923&ndash;2007). The couple reportedly separated when a doctor declared the actress to be infertile; in fact, she later married and had a child.

He was a hands on grandparent which is unusal in a monarchy. He was often seen with Caroline and Stephanie's children.

After his wife's death in a car crash in 1982, he was romantically involved with his first cousin once removed, Princess Ira of Fürstenberg, a former movie actress turned jewellery designer who is also a heiress and the former sister-in-law of fashion designer . Like him, she is a great-grandchild of , the Scottish&ndash;German wife of Prince Albert I of Monaco, though by Lady Mary's second marriage.

Rainier III was also a football fan, having followed to the 2004 Champions League final. Monaco has for years hosted the .

After ascending the throne, Prince Rainier III worked assiduously to recoup Monaco's lustre, which had become tarnished through neglect (especially financial) and scandal (his mother, Princess Charlotte, took a noted jewel thief known as René the Walking Stick as her lover). According to numerous obituaries, the prince was faced upon his ascension with a treasury that was practically empty. The holder of 55 percent of the nation's reserves, the , was bankrupt. The small nation's traditional gambling clientele, largely European aristocrats, found themselves with reduced funds after World War II. Other gambling centers had opened to compete with Monaco, many of them successfully. To compensate for this loss of income, Prince Rainier decided to promote Monaco as a tax haven, commercial center, real-estate development opportunity, and international tourist attraction. The early years of his reign saw the overweening involvement of the Greek shipping tycoon , who took control of the and envisioned Monaco as solely a gambling resort. Prince Rainier regained control of the Société in 1964, effectively ensuring that his vision of Monaco would be implemented.

As Prince of Monaco, Rainier III also was responsible for the principality's new constitution in 1962 which significantly reduced the power of the sovereign. (He suspended the previous Constitution in 1959, saying that it "has hindered the administrative and political life of the country.") The changes ended autocratic rule, placing power with the prince and a National Council of eighteen elected members.

At the time of his death, he was the world's second longest-serving , ranking just below King Rama IX of . During the last two or three years of his life, Rainier was in the custom of asking his valet each morning, "Has Rama survived the night? Or did I just move up in the ranks?"

In the last three years of his life, Prince Rainier's health progressively declined. In early 2004 he was hospitalized for coronary problems. In October he was again in hospital with a lung infection. In November of that year, Prince Albert appeared on 's "" and told that his father was fine, though he was suffering from bronchitis. [ [http://transcripts.cnn.com/TRANSCRIPTS/0411/18/lkl.01.html Interview With Prince Albert of Monaco] , "CNN", , . Accessed , .] On , , he was again hospitalized with a lung infection. Rainier was moved to the hospital's intensive care unit on . One day later, on , it was announced he was on a , suffering from renal and . On the palace reported that despite intensive ongoing efforts to improve the prince's health, he was continuing to deteriorate; however, the following day, he was reported to be conscious, his heart and kidney conditions having stabilized. His prognosis remained "very reserved". [cite web|url=http://news.bbc.co.uk/2/hi/europe/4385965.stm|title=Rainier's condition 'stabilises'|date=27 March 2005|publisher=BBC News|language=English|accessdate=2008-08-18]

On , following consultation with the , the announced that Rainier's son, Hereditary Prince Albert, , would take over the duties of his father as since Rainier was no longer able to exercise his royal functions. [ [http://msnbc.msn.com/id/7347372/ Son of ailing Prince Rainier takes over duties] , "MSNBC", , . Accessed , .]

He was buried on , beside his wife, Princess Grace, at the Saint Nicholas Cathedral, the resting place of previous sovereign princes of Monaco and several of their wives [cite web|url=http://www.gouv.mc/devwww/wwwnew.nsf/1909$/b1c5425907fc1876c125706d0042ab74gb?OpenDocument&2Gb|title=Monaco Cathedral|date=28 July 2008|publisher=Service Informatique du Ministère d'Etat (Monaco Minister of State Information Service|language=English|accessdate=2008-08-18] , and the place where Prince Rainier and Princess Grace had been married in 1956.

Because his death occurred shortly after the death of Pope John Paul II, Rainier's passing was overshadowed in the media.

Rainier's official shortened title was Rainier III, Sovereign Prince of Monaco; this does not include the many other hereditary titles acquired by the Grimaldi family (see Prince of Monaco for a complete list).

Rainier III created a postal museum in 1950 by using the collections of Albert I and Louis II. Since 1996 this museum has been called "".

Creator of the philatelic "" in 1997, he organized with its members some exhibitions of rare and exceptional and letters.

Throughout his reign, Rainier III surveyed all the process of creation of Monaco stamps. He liked stamps printed in intaglio and the art of engraver .