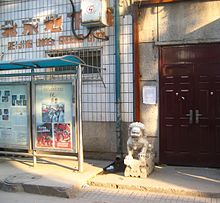 Entrance of the Underground City at Xidamochang Jie

The Underground City (Chinese: 地下城; pinyin: Dìxià Chéng), also known as Dixia Cheng, is a bomb shelter comprising a network of tunnels located beneath Beijing, China, which has since been transformed into a tourist attraction. It has been called the Underground Great Wall because it was built for the purpose of military defense. The complex was constructed during the 1970s in anticipation of a nuclear war with the Soviet Union,[1][2] and was officially reopened in 2000.[3] Visitors were allowed to tour portions of the complex,[3] which has been described as "dark, damp, and genuinely eerie".[4] Dixia Cheng has been closed for renovation since at least February 2008.[1]

The tunnels comprising Dixia Cheng run beneath Beijing's city center, covering an area of 85 square kilometres (33 sq mi) 8 to 18 metres (26–59 ft) under the surface.[1][2] At one time there were about 90 entrances to the complex, all of which were hidden in shops along the main streets of Qianmen.[5] Known entrances include 62 West Damochang Street in Qianmen, Beijing Qianmen Carpet Factory at 44 Xingfu Dajie in Chongwen District, and 18 Dazhalan Jie in Qianmen.[1]

At the height of Soviet-Chinese tensions in 1969, Chinese chairman Mao Zedong ordered the construction of Dixia Cheng during the border conflict over Zhenbao Island in the Heilongjiang River. It was one of the bomb shelters constructed in case of a nuclear attack.[2] The Underground City was designed to withstand either a nuclear or conventional attack.[1] The complex would enable Beijing's population to hide from air raids, and could allow China's leaders to flee safely to military bases in the hills.[6] The government claimed that the tunnels could accommodate all of Beijing's six million inhabitants upon its completion.[4]

The complex was equipped with facilities such as restaurants, clinics, schools, theaters, factories, a roller skating rink, a grain and oil warehouse, and a mushroom cultivation farm, for growing foods that require little light. There were also more than 70 sites inside the tunnels at which water wells could be dug.[2] Elaborate ventilation systems were installed, with shafts that could close to protect against water and chemicals,[7] and gas and waterproof hatches were constructed to protect people in the tunnels from chemical attack and radioactive fallout.[2] The complex also had thick concrete doors, which help protect the tunnels from intruders or a flood.[7]

There is no authoritative information on the extent of the complex's tunnels,[2] but one tourist explained that they link Beijing's central railway station with Tiananmen square, the Temple of Heaven, the Forbidden City and the Western Hills,[6] while the China Internet Information Center asserts that "they supposedly link all areas of central Beijing, from Xidan and Xuanwumen to Qianmen and [the] Chongwen district", in addition to the Western Hills.[2] It is also rumoured that every residence once had a secret trapdoor nearby leading to the tunnels.[2] In the event of a nuclear attack, the plan was to move half of Beijing's population underground and the other half to the Western Hills.[1]

The tunnels were built by more than 300,000 local citizens, including school children, and were mostly dug by hand.[2] Centuries-old city walls, towers and gates, including the old city gates of Xizhimen, Fuchengmen, and Chongwenmen were destroyed to supply construction materials for the complex.[2] 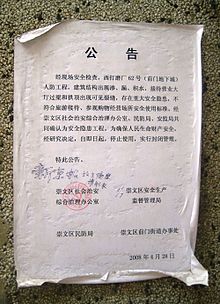 Since the complex was built, the tunnels were used by young lovers and by children daring each other to remain in the darkness longer than their friends.[2] On busy streets, some portions of the complex were used as inexpensive hostels, while others were transformed into shopping and business centers, or even theaters.[2]

While the complex has never been used for its intended purpose, it has been maintained by city officials; water conservancy authorities check it every year during rainy seasons, and it is included in anti-vermin sweeps.[2]

As a tourist attraction

The complex was officially opened in 2000, but has been closed for renovation since at least February 2008.[1] While it was open, visitors were allowed to tour portions of the complex; the Underground City was popular with foreign tourists but remained virtually forgotten by local citizens. Despite having many entrances, foreign visitors entered approved sections accessed via a small shop front in Qianmen, south of Tiananmen Square, at 62 West Damochang Street. Tour groups could enter free of charge and without prior permission while individual tourists not part of a group were charged 20 yuan (US$2.40) each.[2]

The official tour took visitors only on a small circular stretch of the Underground City.[6] Inside the complex, visitors could see signposts to major landmarks accessible by the tunnels, such as Tiananmen Square and the Forbidden City, and could see chambers labeled with their original functions, such as cinemas, hospitals, or arsenals.[5] A portrait of Mao Zedong could be seen amidst murals of locals volunteering to dig the tunnels and fading slogans such as "Accumulate Grain", and "For the People: Prepare for War, Prepare for Famine".[4] Rooms with bunk beds and decayed cardboard boxes of water purifiers could be seen in areas not open to tourists.[1] Visitors on the official tour would also pass by a functioning silk factory operating in one of the underground staff meeting rooms of the complex, and be given a demonstration of the process of obtaining silk from silkworm cocoons, and a chance to buy souvenirs at a tourists' shop operated by the state-owned Qianmen Arts and Crafts Center and the China Kai Tian Silk Company.[6]