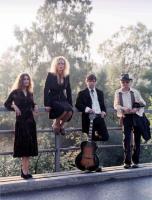 Savoy is a Norwegian-American rock trio consisting of (famous from Norwegian band ) (vocals/guitars/bass/keyboards), Lauren Savoy (vocals/guitars) and Frode Unneland (drums/percussion/backing vocals). The band was formed in 1994 and has released 5 albums to date.

Savoy, unlike Waaktaar-Savoy's other band , has a certain down-to-earth approach and quality to their music. All songs are composed by Paul Waaktaar-Savoy and . Lauren herself is known as a film maker, and Frode Unneland is one of Norway's best drummers known from the music scene as drummer with Chocolate Overdose and Popium. He has also drummed for Norwegian pop sensation .

Savoy have achieved great critical success in Norway. They have been nominated for 3 Norwegian Grammy Awards (Spellemannprisen) and won two of them, in 2000 and 2002. Their most known hits include "Velvet" (also covered by a-ha), "Rain", "Star", "Grind You Down", "If You Won't Come to the Party" and "Whalebone" (from the soundtrack of the well-acclaimed Norwegian film "Hawaii, Oslo"). Savoy have sold a total of 200,000 albums.

On August 6, 2007, Savoy released "Savoy Songbook Vol. 1", a double-CD where CD2 is a "best of"-album with 14 tracks, and CD1 contains three new songs and seven re-worked versions of some of their older songs. It will work as an introduction to the band outside Norway (noting a possible worldwide release). The first single from this release, "Karma Boomerang", is one of the new tracks and was released on 13 April 2007. The second single has been announced to be "Best Western Beauty" but no release date is mentioned.

Savoy signed a UK deal with indie label Genepool Records. They are also back in the studio for the next album.

They are not to be confused with or any other band called Savoy (Germany and Romania each have a band with the name Savoy).