The company was formed from the firms of James Smith McDonnell and Donald Wills Douglas in 1967. Both men were of Scottish ancestry, graduates of MIT and had worked for the aircraft manufacturer Glenn L. Martin Company.[3] Douglas had been chief engineer at Martin before leaving to establish Davis-Douglas Company in early 1920 in Los Angeles. He bought out his backer and renamed the firm the Douglas Aircraft Company in 1921.[4]

McDonnell founded J.S. McDonnell & Associates in Milwaukee, Wisconsin in 1926. His idea was to produce a personal aircraft for family use. The economic depression from 1929 ruined his ideas and the company collapsed. He worked at three companies with the final being Glenn Martin Company in 1933. He left Martin in 1938 to try again with his own firm, McDonnell Aircraft Corporation, this time based at Lambert Field, outside St. Louis, Missouri.[5] World War II was a major earner for Douglas. The company produced almost 30,000 aircraft from 1942 to 1945 and the workforce swelled to 160,000. Both companies suffered at the end of hostilities, facing an end of government orders and a surplus of aircraft. 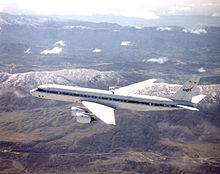 After the war Douglas continued to develop new aircraft, including the DC-6 in 1946 and the DC-7 in 1953.[6][7] The company moved into jet propulsion, producing their first for the military – the conventional F3D Skyknight in 1948 and then the more 'jet age' F4D Skyray in 1951.[8] In 1955, Douglas introduced the first attack jet of the United States Navy with the A4D Skyhawk.[9] Designed to operate from the decks of the World War II Essex class aircraft carriers, the Skyhawk was small, reliable, and tough. Variants of it continued in use in the Navy for almost 50 years,[10] finally serving in large numbers in a two-seat version as a jet trainer.[11]

Douglas also made commercial jets, producing the DC-8 in 1958 to compete with the Boeing 707.[12][13] McDonnell was also developing jets, but being smaller they were prepared to be more radical, building on their successful FH-1 Phantom to become a major supplier to the Navy with the F2H Banshee, F3H Demon, and the F-101 Voodoo.[14][15] The advent of the Korean War Banshee and later Vietnam War F-4 Phantom II helped push McDonnell into a major military fighter supply role.[16] 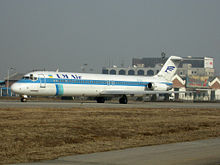 Both companies were eager to enter the new missile business, Douglas moving from producing air-to-air rockets and missiles to entire missile systems under the 1956 Nike program and becoming the main contractor of the Skybolt ALBM program and the Thor ballistic missile program.[17][18] McDonnell made a number of missiles, including the unusual ADM-20 Quail,[19] as well as experimenting with hypersonic flight, research that enabled them to gain a substantial share of the NASA projects Mercury and Gemini. Douglas also gained contracts from NASA, notably for part of the enormous Saturn V rocket.[20][21] Both companies were now major employers, but both were having problems.

Douglas was strained by the cost of the DC-8 and DC-9, and the companies began to sound each other out about a merger. Inquiries began in 1963; Douglas offered bid invitations from December 1966 and accepted that of McDonnell.[22] The two firms were officially merged on 28 April 1967 as the McDonnell Douglas Corporation (MDC).[23] 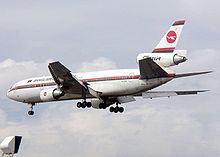 McDonnell Douglas retained McDonnell Aircraft's headquarters location at Lambert-St. Louis International Airport, in Berkeley, Missouri,[24][25][26][27][28] near St. Louis. In 1967, with the merger of McDonnell and Douglas Aircraft, Dave Lewis, then president of McDonnell, was named chairman of what was called the Long Beach, Douglas Aircraft Division. At the time of the merger, Douglas Aircraft was estimated to be less than a year from bankruptcy. Flush with orders, the DC-8 and DC-9 aircraft were 9 to 18 months behind schedule, incurring stiff penalties from the airlines. Lewis was active in DC-10 sales in an intense competition with Lockheed's L-1011, a rival tri-jet aircraft.[29][30][31] In two years, Lewis had the operation back on track and in positive cash flow. He returned to the company's St. Louis headquarters where he continued sales efforts on the DC-10 and managed the company as a whole as President and Chief Operating Officer through 1971.

The DC-10 began production in 1968 with the first deliveries in 1971.[32] Several artists impressions exist of an aircraft named the "DC-10 Twin" or DC-X which McDonnell Douglas considered in the early 1970s but never built.[33][34] This would have been an early twinjet similar to the later Airbus A300, but never progressed to a prototype. This could have given McDonnell Douglas an early lead in the huge twinjet market that subsequently developed, as well as commonality with much of the DC-10's systems.[35]

In 1977 the KC-10 Extender was the second McDonnell Douglas transport aircraft to be selected for use by the US Air Force;[37] the first being the C-9 Nightingale/Skytrain II.

Through the years of the Cold War McDonnell Douglas had introduced and manufactured dozens of successful military aircraft, including the F-15 Eagle in 1974,[38] the F/A-18 Hornet in 1978,[39] and other products such as the Harpoon and Tomahawk missiles. The oil crisis of the 1970s was a serious shock to the commercial aviation industry, as a major manufacturer of commercial aircraft at the time, McDonnell Douglas was hit by the economic shift and forced to contract heavily while diversifying into new areas to reduce the impact of potential future downturns.[citation needed]

On 13 January 1988, McDonnell Douglas and General Dynamics won the US Navy Advanced Tactical Aircraft (ATA) contract. The US$4.83 billion contract was to develop the A-12 Avenger II, a stealthy, carrier-based, long-range flying wing attack aircraft that would replace the A-6 Intruder. Technical issues, development cost overruns, growing unit costs, and delays led to the termination of the program on 13 January 1991 by Defense Secretary Dick Cheney. Years of litigation would proceed over the contract's termination: the government claimed that the contractors had defaulted on the contract and were not entitled to the final progress payments, while McDonnell Douglas and General Dynamics believed that the contract was terminated out of convenience and thus the money was owed. The case continues to sit in litigation in 2011.[53] The chaos and financial stress created by the collapse of the A-12 program led to the layoff of 5,600 employees.[54] The advanced tactical aircraft role vacated by the A-12 debacle would be filled by another McDonnell Douglas program, the F/A-18E/F Super Hornet.[39][55]

However the purchasing of aircraft was curtailed as the Cold War came to an abrupt end in the 1990s. This curtailment in military procurements combined with the loss of the contracts for two major projects, the Advanced Tactical Fighter and Joint Strike Fighter, severely hurt McDonnell Douglas.[48][56]

In 1991, MD-11 was not quite a success, ongoing tests of the MD-11 revealed a significant shortfall in the aircraft's performance. An important prospective carrier, Singapore Airlines (SIA), required a fully laden aircraft that could fly from Singapore to Paris, against strong headwinds during mid-winter; the MD-11 did not have sufficient range for this at the time.[57] Due to the less-than-expected performance figures, SIA cancelled its 20-aircraft MD-11 order on August 2, 1991, and ordered 20 A340-300s instead.[58]

In 1992, McDonnell Douglas unveiled a study of a double deck jumbo-sized aircraft designated MD-12.[35][59] Despite briefly exciting the market, the study was perceived as merely a public relations exercise to disguise the fact that MDC was struggling under intense pressure from Boeing and Airbus. It was clear to most in the industry that MDC had neither the resources nor the money to develop such a large aircraft,[60] and the study quickly sank without a trace. A similar double deck concept was used in Boeing's later Ultra-Large Aircraft study intended to replace the 747,[61][62] but ultimately the double deck concept would not see the light of day until the Airbus A380 in the 2000s.[63][64]

Following Boeing's 1996 acquisition of Rockwell's North American division, McDonnell Douglas merged with Boeing in August 1997 in a US$13 billion stock-swap to create The Boeing Company.[1][56] 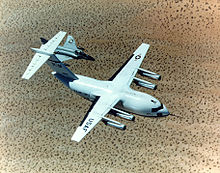 The McDonnell Douglas YC-15 was used as the base for the C-17.

The corporation also produced the Sovereign (later M8000) series of systems in the UK, which used the Soveriegn operating system developed in the UK and which was not based on Pick, unlike the "Reality" family of systems listed above.[citation needed]