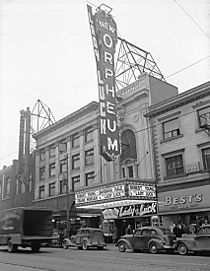 The Orpheum Theatre with advertising for the movie Lady Luck, circa 1946.

Designed by Scottish architect Marcus Priteca,[1] the theatre officially opened on November 7, 1927 as a vaudeville house, but it hosted its first shows the previous day.[2][3] The old Orpheum, at 761 Granville Street, was renamed the Vancouver Theatre (later the Lyric, then the International Cinema, then the Lyric once more before it closed for demolition in 1969 to make way for the first phase of the Pacific Centre project).[4] The New Orpheum, which was the biggest theatre in Canada when it opened in 1927, with three thousand seats,[3] cost $1.25 million to construct.[5][6] The first manager of the theatre was William A. Barnes.[3]

Following the end of vaudeville's heyday in the early 1930s, the Orpheum became primarily a movie house under Famous Players ownership, although it would continue to host live events on occasion. Ivan Ackery managed the Orpheum during most of this period, from 1935[7] up until his 1969 retirement.[8]

In 1973, for economic reasons, Famous Players decided to gut the inside of the Orpheum and change it into a multiplex.[9] A "Save the Orpheum" public protest and fundraising campaign was launched, which even Jack Benny flew in to help with,[5][9] and the Orpheum was saved. On March 19, 1974,[2] the City of Vancouver bought the theatre for $7.1 million, with $3.1 million coming from the city itself, and $1.5 million from each of the provincial and federal governments.[5][6] The Orpheum closed in November 1975 and a renovation and restoration was done by the architectural company Thomson, Berwick, Pratt and Partners.[6][10] It re-opened on April 2, 1977 and has since been the permanent home of the Vancouver Symphony Orchestra.[2][11] Tony Heinsbergen, a U.S. designer who originally chose the color scheme for the interior (ivory, moss green, gold and burgundy) was brought back, fifty years later, for the renovation.[12] In 1983, an additional entrance was opened on Smithe Street.[6]

In 2006, the Capitol Residences development was proposed for the old Capitol 6 cinema adjacent to the Orpheum. The City of Vancouver gave the developer permission for extra height and density on their site in return for a major expansion to the Orpheum, including a long desired back stage area. This was the largest amenities trade in the history of the city, and will increase the usability of the facility.[13] 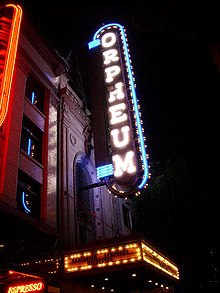