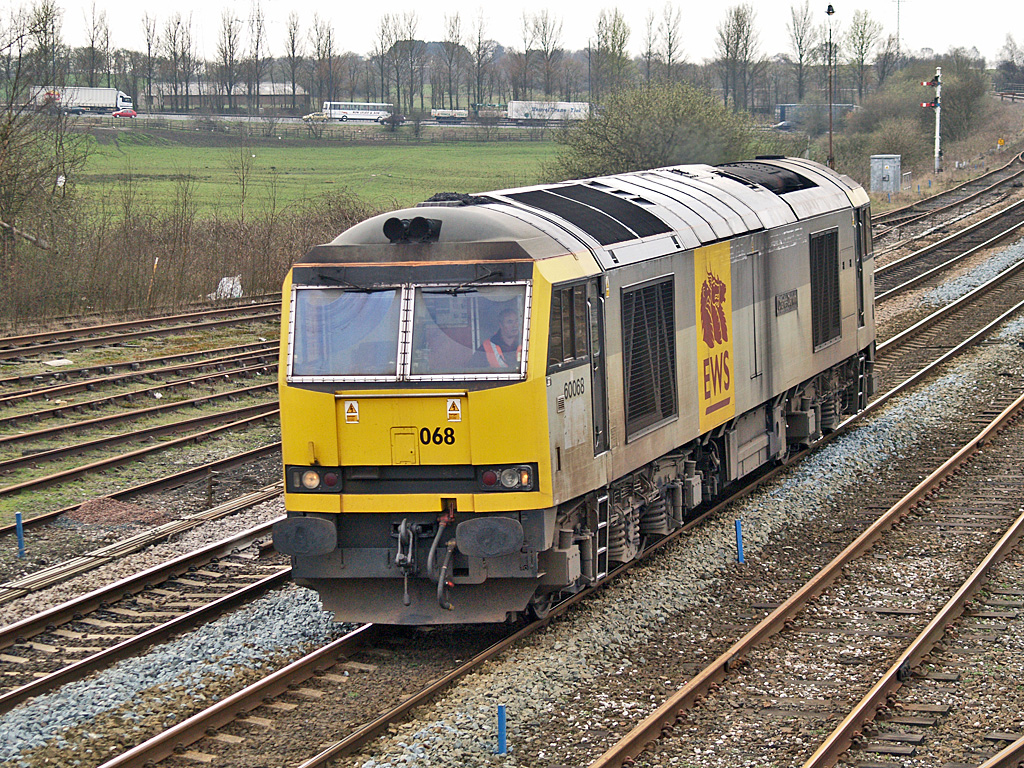 In 1986, was faced with an ageing fleet of freight locomotives which required overhaul or replacement. Most of the fleet came from the 1960s, were low-powered and unreliable.

The earliest examples of the dated from 1976, with the n built locomotives particularly suffering from appalling reliability; while the was neither large in fleet scale or powerful enough to operate heavy freight.

Compared to the recently introduced and private-development driven Class 59s, British Rail could see it had a very poor level of motive power availability, and needed to do something to both stimulate the rail freight sector and stop losing traffic to privately operated trains. [ [http://www.kentrail.co.uk/Class%2060.htm Class 60 ] ]

On , the British Rail Board issued a competitive tender for response by , for a fleet of 100 locomotives, valued at around £125 million. Of the six companies invited to tender, only three bid responses were received:

* - offered a MetroCammell body with an option of traction packages, many untried, and could not offer performance guarantees as stipulated by the tender
* - a partnership with Electro Motive. They offered a state-of-the-art Class 59, built in the UK probably at BREL Crewe Works, which had an existing partnership for construction of the electric locos
* - offered a locomotive powered by either a Mirrlees or Ruston engine, and used separately-excited (Sepex) traction control, as previously tested on the final

Brush won the contract on , over long time leaders GEC, partly due to political considerations and partly on the power/knowledge combination of the proposed package.

Brush sub-contracted parts construction, with only final construction and commissioning being undertaken at Brush's revamped erecting shops at . The bodyshells, shared with the similar Class 92 s, were fabricated by Procor of and delivered pre-painted in then standard triple grey livery. The power unit came from , and was identical to the unit experimentally fitted to 37901-37903 except in size and haulage capability. [ [http://www.thejunction.org.uk/cl60.html rolling stock : class 60 ] ]

On , 60001 "Steadfast" was handed over to Railfreight and driven under its own power to .Locomotive testing at revealed a whole host of mechanical faults which would set back entry into service, and did not look good against the trouble-free commissioning of the contemporary Class 59s. [ [http://www.kentrail.co.uk/Class%2060.htm Class 60 ] ]

Other delivery problems were quickly identified with: computer software; suspension problems resulting in poor ride quality of the bogies; and structural defects, including problems with the front end mock-snowploughs not being strong enough to withstand damage. This resulted in part-finished locomotives being stored at Loughborough, and the build almost being cancelled.

Modifications had to be completed to BR's satisfaction before the locomotives would be accepted into traffic, and at one point in the programme, there were almost 100 faults per locomotive outstanding which were left to Brush to fix under warranty. [ [http://www.thejunction.org.uk/cl60.html rolling stock : class 60 ] ]

After 16 months, the problems were reduced to an acceptable level, and the fleet was deployed to Toton under the three 'shadow' private companies: , and . Five locomotives were repainted in black and orange colours, while three were finished in the aircraft blue livery of Mainline Freight. All locomotives were deployed with names and name plates.

Additional reliability problems surfaced with the Mirrlees power unit, and further modifications were needed before a satisfactory level of reliability was achieved by the fleet. [ [http://www.thejunction.org.uk/cl60.html rolling stock : class 60 ] ] However, once these were achieved, the fleet was deployed in more depots around the network, including and Hither Green.

When purchased all of the former British Rail freight operations in 1996, they were not convinced by the overall quality of the inherited fleet. The EWS maroon and gold livery was first applied to 60019 at Brush in May 1996, and by the end of 2001 around 40% of the fleet had been repainted.

Needing to find a quickly deployable replacement with exceptional reliability, EWS concluded that neither Brush nor the Class 60 was the right choice, and chose instead to return to General Motors and order the Class 66s. In comparison of the tender-to-operations timescale, GMD delivered 250 direct-into-service Class 66s to in four years; while Brush took six years to deploy 100 unreliable Class 60s.

Reliability problems have persisted with the Class 60, especially when contrasted with the Class 66s; although the Class 60s retain the advantage of being more powerful against even latest developments of the Class 66. Class 60s are typically employed on the RMC stone traffic from , petroleum traffic on / and , and also on steel trains between and the /. Recently, the locomotives have been seen hauling the new 'Cemex' HOA wagons around the Midlands area. [ [http://www.thejunction.org.uk/cl60.html rolling stock : class 60 ] ]

Many of the original historical names applied to the fleet have now been removed, and some now carry business-related names, including (60033). In 2000, EWS repainted 60081 in a mock green livery and renamed it "" for the open weekend. These livery variations resulted in unprecedented frothing by paint Neds.

In light of the introduction of more Class 66s and EWS drive to standardise operations around the EMD locomotives, from 2003 EWS began to store Class 60s due for expensive heavy overhauls, and cut back on maintenance of the remaining fleet leading to increasingly poor reliability.In May 2004 60098 was taken out of traffic for storage at , and over the next 15 months an additional 74 locomotives were stored at various locations. In September 2004 as traffic levels began to increase for the winter months, locomotives were put back into service.

This "stored in summer, traffic in winter" cycle was the EWS standard deployment of the Class 60 fleet, as the heavy oil traffic reduces in summer; while the annual autumn programme of railhead treatment trains increase fleet requirements in the winter. The cycle was repeated in both 2005 and 2006, with monthly adjustments of the deployed fleet as well as locomotives swapped in and out of active pools. At its height, the fleet in three years of this usage has had 85 members available, with up to 50 deployed; while at its low in summer, less than 25 locomotives are active.

However, 2007 has seen a change in the cycle. Due to EWS' expanded European operations the Class 60 active fleet strength was set at 60 at the end of May 2007. This is expected to rise throughout the year. Due to its heavy haulage capability beyond that of the Class 66, EWS stills consider the Class 60s as an integral part of the locomotive fleet. [ [http://www.thejunction.org.uk/cl60.html rolling stock : class 60 ] ]

As of June 2008, two class 60 locomotives have received re-paints by DB the new owners of EWS. The locomotives are 60074 (Painted into Teenage Cancer blue) and 60040 (Painted in dark red with Army logos)

EWS are currently reinstating more class 60's now that the leaf clearing season is going to start and the fact that the company have stored their class 37 fleet as of now(5/10/08, another factor in the reinstatement of the class 60 fleet is that EWS have many class 66's abroad.

Speculation has it that EWS are going to spend big money on the fleet in the next few years, although EWS are keeping a close eye on freightliners new class 68 fleet due to enter service in 2009.