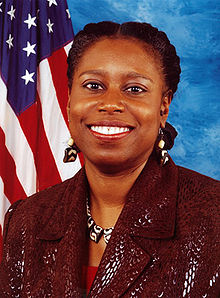 Cynthia McKinney began her campaign for President of the United States on December 16, 2007 as a candidate for the Green Party presidential nomination via YouTube. She and her running mate Rosa Clemente accepted the Green Party's presidential nomination July 12, 2008 at the 2008 Green National Convention. Her campaign focused on issues such as racial profiling, September 11, 2001 attacks, and the Green Party's 10 key values. She also supports statehood for the District of Columbia, slavery reparations, electoral reforms including instant runoff voting, and calls for abolishing the death penalty and the War on Drugs.[1]

On December 11, 2007, McKinney announced her candidacy for the Green Party nomination for President of the United States[3] in the 2008 presidential election.[4] Green Party members attempted to recruit McKinney both in 2000 and 2004. In 2000, she was widely mentioned as a possible vice-presidential running mate for Ralph Nader; in 2004, attempts were made to convince McKinney to run on the Green Party ballot line for president.

While there had been a great deal of excitement among party members about a possible McKinney run in those prior elections, the congresswoman had little to do with the party apart from having had Green Party loyalists working on her congressional campaigns. This changed drastically following her defeat in the 2006 election. McKinney attended the California Green Party strategy retreat in Sonoma, California, where she was the keynote speaker.[5] On May 25, 2007, she was asked about a presidential run on WBAI and confirmed that she had thought about a Green run: "2008 has not been ruled out, some kind of effort. Certainly now it is questionable as to whether that effort would come under the banner of the Democratic Party."[6] 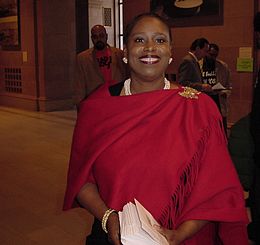 On June 9, speaking at a Harlem fundraiser for her Congressional campaign debt, McKinney addressed speculation that she might run for president in 2008. At the end of the program, Robert Knight of Pacifica Radio, who emceed the evening's events, took the pulpit to ask: "I can't hardly wait for 2008. Ms. McKinney, in 2008, what color is your parachute?" McKinney responds from the audience, "it's not red and it's not blue."[7] McKinney also appeared at the July 15 Green Party National Meeting in Reading, Pennsylvania, where she suggested that the Green Party could become a progressive political force. "[T]he disgust of the American people with what they see before them — all they need is the blueprint and a road map. Why not have the Green Party provide the blueprint and the road map?"

On July 17, McKinney also received the endorsement of the Workers World Party, the first time that party chose not to nominate a candidate of its own.[8]

At an August 27 peace rally in Kennebunkport, Maine McKinney confirmed the depth of her disenchantment with the Democratic Party, urging San Francisco voters to replace Nancy Pelosi with antiwar activist Cindy Sheehan. On September 10, in a letter to the Steering Committee of the Green Party of the United States, McKinney stated she would not seek the Green Party nomination for president.[9] However, in early October it appeared that McKinney was making moves toward declaring herself an official Green Party candidate.[10]

By October 9, 2007, Green leaders were receiving emails indicating McKinney had formally joined the Green Party. The emails also indicate McKinney could announce a Green Party presidential bid by the third week of October. Following a brief exploratory visit to California in mid-October, McKinney filed with the FEC. She formally announced her candidacy with a video on her website and on YouTube on December 16, 2007. Later that month she agreed to join with others on the Green Party California Primary Ballot for an event in San Francisco entitled Campaign 2008: A Presidential Debate That Matters.[11] McKinney has also filed with the State Board of Elections of Illinois for the Green party in the presidential race.[12]

On July 9, 2008 she named her running mate as Rosa Clemente[13] and clinched the party's nomination three days later at the 2008 Green Party National Convention.[14]

During the Democratic National Convention from August 25 - 28th Cynthia McKinney, and Rosa Clemente appeared at several events and demonstrations in Denver [15]. On August 24 McKinney appeared at the End the Occupations March and Rally organized by Recreate 68 [16], and spoke to the crowd from the West Steps of the Colorado State Capitol Building [17]. McKinney's appearance at the event caused some controversy [18] after the Green_Party_of_Colorado's decision not to support Recreate 68. On the 27th, Rosa Clemente spoke at a "Open The Debates" rally organized by the Nader/Gonzalez campaign.

During the first week in September Mckinney traveled to Wisconsin for several events [19]. On the 5th McKinney spoke in Racine, Wisconsin to the local We Are Change group [20]. On September 6 Mckinney spoke [21] [22] in Baraboo, Wisconsin at Fighting Bob Fest the largest annual political festival in the United States [23]. The eight year old festival is named in honor of Bob La Follette.

Cynthia McKinney was reported by Fox News on October 2, 2008 to have had a conspiracy theory stating that during the aftermath Hurricane Katrina, The Pentagon dumped 5,000 executed felons that were killed by a single bullet to the head. In the article (bad link) McKinney stated that she was informed by the mother of a National Guard, with verifications from "insiders." [24]

The Green Party had announced plans to get on all 50 state ballots and D.C. for 2008. They did not meet their goal, but McKinney was on 32 ballots with 368 electoral votes (68.4% of the total possible) as well as another 18 states as a write-in candidate.
The following is a table comparison of ballot status in 2008 to 2004.