From 1988 to 1997, the SPDC was known as State Law and Order Restoration Council (SLORC). It replaced the role of Burma Socialist Programme Party (BSPP).[2] In 1997, SLORC was abolished and reconstituted as the State Peace and Development Council (SPDC). The powerful regional military commanders, who were members of SLORC, were promoted to new positions and transferred to the capital. The new regional military commanders were not included in the membership of the SPDC.

The SPDC consists of eleven senior military officers (six of whom have retired and no longer play any role in decision-making). The members of the junta[3] wield a great deal more power than the cabinet ministers, who are more junior military officers, or civilians. (The exception is the Defence Ministry portfolio, which was in the hands of junta leader Than Shwe himself.)

Although the regime has retreated from the totalitarian Burmese Way to Socialism of BSPP, the regime is widely accused of human rights abuses. It has rejected the 1990 election results and kept Aung San Suu Kyi under house arrest until the thirteenth of November 2010.[4] The council was officially dissolved on March 30, 2011, with the inauguration of the newly elected government.[5] 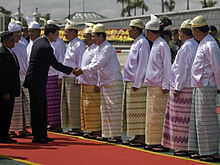 SPDC members with Thai delegation in an October 2010 visit to Naypyidaw.

SLORC was formed when the Burmese Armed Forces, commanded by General Saw Maung (later self-promoted to 'Senior General' Saw Maung, died July 1997), seized power on 18 September 1988 crushing the 'Four Eights Uprising'. On the day it seized power SLORC issued Order No.1/1988 stating that the Armed Forces had taken over power and announced the formation of the SLORC. With Order No. 2/1988, the SLORC abolished all 'Organs of State Power' that were formed under the 1974 Burmese Constitution. The Pyithu Hluttaw (the Legislature under the 1974 Constitution), the Council of Ministers (the Cabinet), the Council of People's Justices (the Judiciary), the Council of People's Attorneys (the 'Attorney-General Office'), the Council of People's Inspectors (the 'Auditor-General Office'), as well as the State/Region, Township, Ward/Village People's Councils were abolished.

The SLORC also stated that the services of the Deputy Ministers in the previous Burma Socialist Programme Party (BSPP) government which it replaced were also terminated. (Under the 1974 Burmese Constitution the 'Council of Ministers' acted as a Cabinet but since the Deputy Ministers were not considered to be formally part of the Council of Ministers, the SLORC made sure that the Deputy Minister's – together with the Ministers' – services in the previous BSPP government from whom it had taken over power were also terminated.) The Orders that SLORC issued on the day of its takeover can be seen in the 19 September 1988 issue of The Working People's Daily. The first Chairman of SLORC was General Saw Maung, later Senior General, who was also the Prime Minister. He was removed as both Chairman of SLORC and Prime Minister on 23 April 1992 when General Than Shwe, later Senior General, took over both posts from him.

On 15 November 1997, SLORC was abolished and reconstituted as the State Peace and Development Council (SPDC). Most but not all members of the abolished SLORC were in the SPDC military regime. 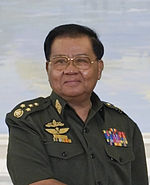 Western Non-governmental Organizations, such as the Burma Campaign UK, Amnesty International, Human Rights Watch, have made a variety of serious accusations against the SPDC. Reports by these organizations as well as the United Nations and Karen Human Rights Group have alleged human rights abuses taking place in Burma, including:

One of the worst incidents in Burma took place during the uprising of August 1988, when millions of Burmese marched throughout the country calling for an end to military rule. Soldiers shot hundreds of protesters and killed an estimated 3,000 people in the following weeks.[not in citation given] During the August and September demonstrations of 2007, at least 184 protesters were shot and killed and many were tortured. The army continues to engage in military offensives against ethnic minority populations, committing acts that violate international humanitarian law.[7]

It has been alleged that the SPDC have forcibly recruited children - some as young as 10 - to serve in its army, the Tatmadaw. It is difficult to estimate the number of child soldiers currently in the Myanmar Army, but there are thousands, according to Human Rights Watch[1] [2] [3] the Child Soldiers Global Report 2008 [4] and Amnesty International.[citation needed]

Human Rights Watch has reported [9] that since Cyclone Nargis in May 2008, the Burmese authorities have expelled hundreds, if not thousands, of displaced persons from schools, monasteries, and public buildings, and encouraged them to return to their destroyed villages in the Irrawaddy Delta. The authorities emptied some public buildings and schools to use as polling stations for the May 24 referendum on a new constitution, despite pleas from United Nations Secretary-General Ban Ki-moon to postpone the referendum and focus their resources on humanitarian relief. Since then, the SPDC has evicted people from dozens of government-operated tented relief camps in the vicinity of the former capital Yangon, ordering the residents to return to their homes, regardless of the conditions they face.

The forced evictions are part of government efforts to demonstrate that the emergency relief period is over and that the affected population is capable of rebuilding their lives without foreign aid. People forced from their homes by Cyclone Nargis are considered to be internally displaced persons under international law. Under the UN Guiding Principles on Internal Displacement, the Burmese government should ensure the right of “internally displaced persons to return voluntarily, in safety and with dignity, to their homes or places of habitual residence, or to resettle voluntarily in another part of the country.”

According to the International Labour Organization (ILO), forced labour continues to be widespread in Burma. It is imposed mainly by the military, for 'portering' (that is, carrying of provisions to remote bases, or on military operations), road construction, camp construction and repair, and for a range of other tasks. In March 1997, the European Union withdrew Burma's trade privileges because of the prevalence of forced labor and other abuses. The same year, the ILO established a Commission of Inquiry to look into allegations of forced labour, coming up with a damning report the following year.

Even before the large-scale demonstrations began in August 2007, the authorities arrested many well-known opponents of the government on political grounds, several of whom had only been released from prison several months earlier. Once the protests were underway but before the 25–29 September crackdown, more arrests of members of the opposition party National League for Democracy (NLD) took place, which critics say was a pre-emptive measure before the crackdown.

Mass round-ups occurred during the crackdown itself, and the authorities continued to arrest protesters and supporters throughout 2007. Between 3,000 and 4,000 political prisoners were detained, including children and pregnant women, 700 of whom were believed still in detention at year’s end. At least 20 were charged and sentenced under anti-terrorism legislation in proceedings which did not meet international fair trial standards. Detainees and defendants were denied the right to legal counsel.[8]