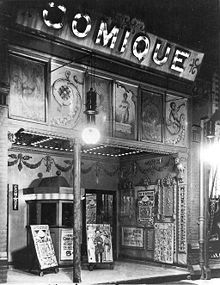 A nickelodeon theater in Toronto, Ontario, Canada, circa 1910

The Nickelodeon (AE: nickel = 5¢-coin, Greek: Odeion = roofed over theatre) was a multi-purpose theater that was popular from about 1900 to 1914. Usually situated in converted storefronts, the Nickelodeon featured motion pictures, illustrated songs, slide shows and lectures. Nickelodeons were one of the two main exhibition venues for motion pictures, apart from Vaudeville theaters.

Nickelodeons declined with the advent of the feature film, and as cities grew and industry consolidation led to larger, more comfortable, and better-appointed movie theaters.

The name "Nickelodeon" was first used in 1888 by Austin's Nickelodeon,[1] a dime museum located in Boston, Massachusetts. However, the term was popularized by Harry Davis and John P. Harris, who opened their small, storefront theatre with that name on Smithfield Street in Pittsburgh, Pennsylvania on June 19, 1905. Although it was not the first theater to show films, in 1919 a news article stated that it was the first theater in the world "devoted exclusively to exhibition of moving picture spectacles."[2] Davis and Harris found such great success with their operation that their concept of a five cent theatre running movies continuously was soon imitated by hundreds of ambitious entrepreneurs, as was the name of the theatre itself. Louis B. Mayer came of age just as the popularity of the nickelodeon was beginning to rise; he renovated the "Gem Theater" in Haverhill, Massachusetts, converting it into a nickelodeon he opened in 1907 as the "Orpheum Theater", and announced that it would be "the home of refined entertainment devoted to Miles Brothers moving pictures and illustrated songs".[3] Other well-known nickelodeon owners were the Skouras Brothers of St. Louis.

Nickelodeons would show films which were typically ten to fifteen minutes in length, and in a variety of styles and subjects, such as short narratives, "scenics" (views of the world from moving trains), "actualities" (precursors of later documentary films), illustrated songs, local or touring song and dance acts, comedies, melodramas, problem plays, stop action sequences, sporting events (e.g. the 1897 Corbett-Fitzsimmons championship fight or the 1899 Jeffries-Sharkey fight) and other features which allowed them to compete with vaudeville houses.

The titles of a few of the films released in 1907 and distributed to nickelodeons by the Miles Brothers (Herbert, Harry and Earl C.) partially illustrate this diversity.

These are taken from a 1907 article published in The Saturday Evening Post:

Other 1907 films also distributed to nickelodeons by the Miles Brothers:

Though strong through the period between 1905 and 1913, Nickelodeon theaters would also face their downfall after the arrival of longer films and larger audiences. Box office attendance grew rapidly, necessitating larger auditoriums. Longer films caused ticket prices to double from five cents to ten cents.[4]