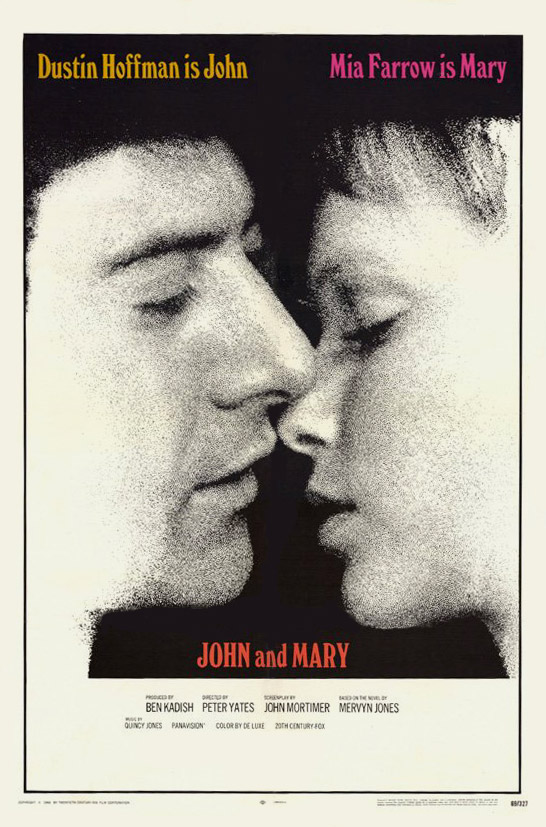 It was released theatrically in on , . [ [http://www.boxofficemojo.com/movies/?id=johnandmary.htm Box Office Mojo.] ] It received an R rating upon its original release, [ [http://www.imdb.com/title/tt0064513/ Ratings @ IMDb.] ] which was later downgraded to a PG rating.

"John & Mary" begins the morning after John and Mary meet in a bar, during a conversation about 's "", and go home with each other. The story unfolds during the day as they belatedly get to know each other over breakfast, lunch and dinner. Flashbacks of their previous bad relationships are interspersed throughout when something in their conversation brings the thought up.

of the says, "John and Mary" is supposed to be a contemporary movie, I guess, and yet it's curiously out of touch. John and Mary shadow box uneasily with the American language, trying to sound like all people their age without sounding too much like any particular person." [ [http://rogerebert.suntimes.com/apps/pbcs.dll/article?AID=/19691223/REVIEWS/912230301/1023 Roger Ebert @ RogerEbert.com.] ] John Thompson of the calls it "a delectable New Wave–inspired dish for thoughtful viewers tired of the same old menu." [ [http://www.orlandoweekly.com/film/review.asp?rid=12335 John Thompson @ Orlando Weekly.] ] of the concludes, "There is nothing wrong with the idea of John and Mary, just with its execution." [ [http://movies.nytimes.com/movie/review?_r=2&res=9A05EFD8133CE73BBC4D52DFB4678382679EDE&partner=Rotten%20Tomatoes&oref=slogin&oref=login Vincent Canby @ NYT.com.] ]