Heinrich Heine had provided Wagner with the inspiration for Der fliegende Holländer and Wagner drew on the same source for the plot of Tannhäuser: Heine's sardonic poem Elementargeister, telling of the lure of the grotto of Venus, was published in 1837 in Der Salon. Wagner also drew material from E. T. A. Hoffmann's story The Singer's Contest and Ludwig Tieck's 1799 story Faithful Eckhart and Tannhäuser. Other possible sources include the 15th century folk ballad Das Lied von dem Danheüser[1] and Ludwig von Bechstein's collection of Thuringian legends Der Sagenschatz und die Sagenkreise des Thüringerlandes.[2] Wagner wrote the prose draft of Tannhäuser between June and July 1842 and the libretto in April 1843.[3]

The libretto of Tannhäuser combines the mythological element of German opera and the medieval history of French Grand Opera. Wagner brings these two together by constructing a plot involving the 14th century Minnesingers and the myth of Venus and her realm of Venusberg ('the mountain of Venus'). Both the historical and the mythological are united in Tannhäuser's personality; although he is a historical poet composer, little is known about him other than myths that surround him. Furthermore, half of the opera takes place in a historical setting, and half takes place in the mythological Venusberg.

Wagner began composing the music during a vacation in Teplitz in the summer of 1843 and completed the full score on 13 April 1845; the opera's famous overture, often played separately as a concert piece, was written last.[4] The instrumentation also shows signs of borrowing from French operatic style. The score includes parts for on-stage brass; however, rather than using French brass instruments, Wagner uses twelve German waldhorns. Wagner also makes use of the harp, another commonplace of French opera.

The first performance was given in the Royal Theater in Dresden on 19 October 1845. The composer Ferdinand Hiller, at that time a friend of the composer, assisted in the musical preparations for the production. The part of Elizabeth was sung by Wagner's niece Johanna Wagner; Wagner had intended to premiere the opera to mark Johanna Wagner's 19th birthday on 13 October, but she was ill, which forced its postponement for six days.[5] Venus was created by Wilhelmine Schröder-Devrient, and the title role was taken by Josef Tichatschek. The performance was conducted by the composer.[6] Tannhäuser was not the success that Rienzi had been, and Wagner almost immediately set to modifying the ending, tinkering with the score through 1846 and 1847.

This version of the opera, as revised for publication in 1860 (including some changes to the final scene) is generally known as the "Dresden" version.

Wagner substantially amended the opera for a special 1861 performance by the Paris Opéra, requested by the French emperor Napoleon III at the instigation of Pauline von Metternich, wife of the Austrian ambassador to Paris. This revision forms the basis of what is now known as the "Paris version" of Tannhäuser.

Wagner had originally hoped the Parisian première would have taken place at the Théâtre Lyrique; however since the work was to be presented at the Paris Opéra the composer was required to insert a ballet into the score, according to the traditions of the house. Wagner agreed to this condition since he believed that a success at the Opéra represented his most significant opportunity to re-establish himself following his exile from Germany. However, rather than play the ballet in its traditional place in Act II, he chose to place it in Act I, where it could at least make some dramatic sense by representing the sensual world of Venus's realm. Thus in Tannhäuser the ballet takes the form of a bacchanale.

The changes to the score in the Paris version, apart from the ballet, included:

Tannhäuser's first performance in Paris was given on 13 March 1861 at the Salle Le Peletier of the Paris Opéra. The composer had been closely involved in its preparation and there had been 164 rehearsals.[7]

However, there was a serious planned assault on the opera's reception by members of the wealthy and aristocratic Jockey Club. Their custom was to arrive at the Opéra only in time for the Act II ballet, after previously dining, and, as often as not, to leave when the ballet was over. They objected to the ballet coming in Act I, since this meant they would have to be present from the beginning of the opera. Furthermore, they disliked Princess von Metternich, who had promoted the performances, and her native country of Austria. Members of the Club, therefore, led barracking from the audience with whistles and cat-calls. At the third performance on 24 March, this uproar caused several interruptions of up to fifteen minutes at a time. As a consequence, Wagner withdrew the opera after the third performance.[8] This marked the end to Wagner's hopes of establishing himself in Paris, at that time the centre of the operatic world.

A few further changes to Tannhäuser were made for an 1875 performance of the opera in Vienna, carried out under Wagner's supervision. These included linking the end of the overture to the start of the opera proper. The 1875 Vienna version is that normally used in modern productions of the "Paris" version, often with the reinstatement of Walther's Act 2 solo.[9] Wagner remained unsatisfied with the opera. Three weeks before he died, his wife Cosima noted in her diary that "He says he still owes the world Tannhäuser" (23 January 1883).

Premieres of the "Paris" version were given in New York at the Metropolitan Opera on 30 January 1889 and at London's Royal Opera House on 15 July 1895.

Note
Although the libretto and the score always use the single name Tannhäuser in stage directions involving the title character or in indicating which passages are sung by him, that name never appears as part of the lyrics. Rather, each character who addresses Tannhäuser by name uses the given name Heinrich.
The distinct character Heinrich der Schreiber sings many melodies distinct from all other named characters, and occasionally unique lyrics. However, in the libretto he finds individual mention only in the list of characters, with the ensemble numbers that include him being labelled for the Ritter (i.e., "knights", referring to the Minnesinger, who all share knightly rank). The score (at least in the Schirmer edition) labels his melody line simply "Schreiber".

The Venusberg, (the Hörselberg of "Frau Holda" in Thuringia, in the vicinity of Eisenach)

Tannhäuser is held there a willing captive through his love for Venus. (Ballet scene; bacchanalian music.) Following the orgy of the ballet, Tannhäuser's desires are finally satiated, and he longs for freedom, spring and the sound of church bells. Once again he takes up his harp and pays homage to the goddess in a passionate love song, which he ends with an earnest plea to be allowed to depart. When Venus again tries to charm him, he declares: "My salvation rests in Mary, the mother of God." These words break the unholy spell. Venus and her attendants disappear, and he suddenly finds himself just below the Wartburg. It is springtime; a young shepherd sits upon a rock and pipes an ode to spring. Pilgrims in procession pass Tannhäuser as he stands motionless, and he sinks to his knees, overcome with gratitude. He is discovered by the landgrave and his companions, Wolfram, Walther, Biterolf, Reinmar, and Heinrich. They joyfully welcome the young singer, who had originally fled from the court because he was shamefully bested in the prize-singing contest. He initially refuses to join them, but when Wolfram informs him that his song has gained for him the heart of Elisabeth, he relents and follows the landgrave and the singers to the Wartburg. 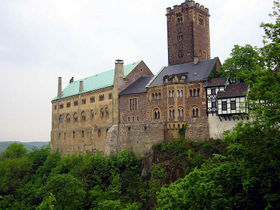 The Wartburg in Eisenach

Hall of the Wartburg

Elisabeth has been living in seclusion since Tannhäuser's disappearance. When she hears of his return, she joyfully agrees to be present at a prize contest of song, and enters the hall. Wolfram leads Tannhäuser to her; he loves her, but dares not tell her the evil he has done. The Landgrave and Elisabeth receive the guests who assemble for the contest, the noblemen of the neighbourhood, who appear in rich attire. (March and chorus.) The Landgrave announces the subject of the contestants' songs is to be "love's awakening". Elisabeth will grant the victor one wish, whatever it may be. Wolfram performs first; he declares that love is like a pure stream, which should never be troubled. Tannhäuser replies hotly that he finds the highest love only in the pleasure of the senses. The other singers support Wolfram. Tannhäuser replies to each separately, and at last in growing excitement he answers Wolfram with a love song to Venus, and declares that if the knights wish to know love as it is they should repair to the Venusberg. The women, with the exception of Elisabeth, leave the hall in horror, and the knights draw swords upon Tannhäuser. Elisabeth protects him, and since he expresses his penitence, the Landgrave allows him to join a band of pilgrims bound for Rome, where he may perhaps obtain forgiveness and redemption from the Pope. 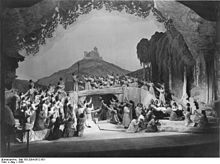 The valley of the Wartburg, in autumn

Orchestral music describes the pilgrimage of Tannhäuser. Elisabeth, accompanied by Wolfram, falls on her knees in prayer. She asks the returning pilgrims for news of Tannhäuser, but in vain. Once again she prays earnestly and returns broken-hearted to the Wartburg. Wolfram, who loves her with faithful devotion, has a presentiment of her death. (Wolfram: "Song to the evening star.") He sees before him a tottering pilgrim in torn garments. It is Tannhäuser, who informs Wolfram that the pope refused his plea for absolution, and declared that he had no more chance of being forgiven than the Pope's staff had of sprouting leaves. Utterly despairing, Tannhäuser is now seeking the way back to the Venusberg and presently calls to Venus, who appears before him and bids him welcome back to her cavern. Suddenly, Wolfram notices a funeral procession descending the hill, and sees the mourners bearing the corpse of Elisabeth on a bier. Tannhäuser races to her side and collapses upon her body with the words, "Holy Elisabeth, pray for me" upon his lips. The younger pilgrims enter and announce that the Pope's staff has sprouted young leaves, a sign that Tannhäuser has obtained God's forgiveness. 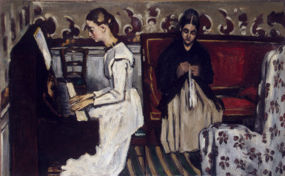 Paul Cézanne. The Overture to Tannhäuser: A Girl at the Piano, 1868.

A recent reinterpretation of Wagner's opera in terms of Game Theory is offered by three economists who argue in their analysis of Tannhäuser's Dilemma[10] that the hero's outburst in the song contest can be viewed as a rational act solving the dilemma he faces once the tournament is under way: if he wins the contest he aggravates his sins as he would violate the sacrament of penance before a marriage to Elisabeth; if he loses, he loses his beloved Elisabeth.