Nieuwpoort is a municipality located in Flanders, one of the three regions of Belgium, and in the Flemish province of West Flanders. The municipality comprises the city of Nieuwpoort proper and the towns of Ramskapelle and Sint-Joris. On January 1, 2008 Nieuwpoort had a total population of 11,062. The total area is 31.00 km² which gives a population density of 350 inhabitants per km². The current mayor of Nieuwpoort is Rolland Crabbe (CD&V)

In Nieuwpoort, the Yser flows into the North Sea. It is also the home of a statue created by Jan Fabre called Searching for Utopia

A view of the beach and the pier at Nieuwpoort.

Nieuwpoort on the Ferraris map (around 1775)

Nieuwpoort taken from the air

It obtained city rights in 1163 from Count Philip of Flanders. The Battle of Nieuwpoort, between the Dutch and the Spanish, happened here in 1600. The city was a Dunkirker base.

The city was occupied by French forces for six years between 1757 and 1763, as part of the conditions of the Second Treaty of Versailles between France and Austria.

During the Battle of the Yser, part of the First Battle of Ypres in World War I, Karel Cogge opened the sluice gates on the mouth of the river Yser twice to flood the lower lying land, thus halting the German advance.

The old city centre of Nieuwpoort is located about three kilometers from the current coastline. Close to the sea, a new tourist centre has developed. Both parts form one contiguous built up area, connected by buildings along the Albert I Laan street and the fishing port. Besides Nieuwpoort proper, two small villages in the Flemish polders are part of the municipality, Sint-Joris and Ramskapelle, Nieuwpoort.

Nieuwpoort is located by the sea. At the coastal line, it borders the municipalities Koksijde at its town Oostduinkerke and Middelkerke at its town Lombardsijde. Because the territory of the town of Ramskapelle expands far inland, Nieuwpoort has a large number of neighbouring towns, most of which are part of 2 large municipalities: 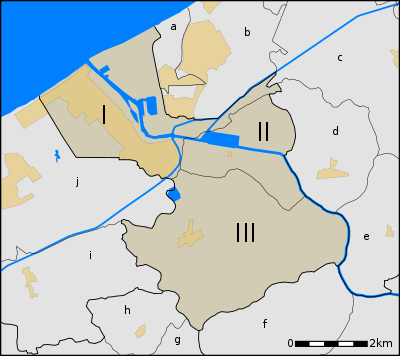