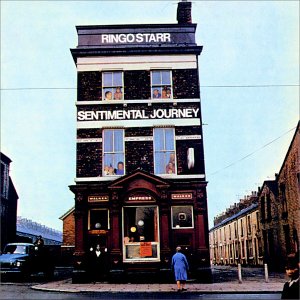 Beginning in October 1969, Starr engaged the services of Beatles producer to helm his solo debut. The idea, thematic in approach, was to create an album of standards that would reflect his parents' favorite songs, even asking them and other members of his family to choose the tracks. In addition, he would have one song each arranged by different musicians, ranging from Martin himself, , , and old friend of The Beatles from Hamburg (and bassist with ) , among others. Although begun during the sessions, Starr's own composition, "It Don't Come Easy", would appear as a single in 1971. Recording of the album was completed in March 1970, with "Sentimental Journey" being rushed out merely two weeks later in order to avoid clashing in the shops with The Beatles' impending final album "Let It Be" in May and "McCartney", whose release date its maker flatly refused to delay after being asked to by the other members of the band.

"Sentimental Journey" received fair reviews upon its release, although many critics found the idea of Starr covering standards a bit odd considering his musical background. His fame in The Beatles was all that was required, however, to get it all the way to #7 in the UK - with no single release to promote it - and #22 in the United States. Although the style of the album took many by surprise, Starr's swift follow-up, "", would be just as radical a stylistic shift.

"Sentimental Journey" was remastered and reissued on CD in 1995.

*Ringo Starr: Vocals.
*All instruments performed by The Orchestra.