Elite (occasionally spelled élite) (Latin, electus - "chosen") refers to an exceptional and/or privileged group that wields considerable power within its sphere of influence. Depending on the context, this power might be physical, spiritual, intellectual and/or financial.

In sociology, an elite is a group of relatively small size, that is dominant within a large society, having a privileged status perceived as being envied by others of a lower line of order. If such an elite wields political power, it almost invariably puts itself in a position of leadership, whether it be expected or volunteered, and often subjects the holders of elite status to pressure to maintain that leadership position as part of status.

During the Middle Ages (including the Dark Ages and parts of the Renaissance), religious elites wielded considerable influence and power. Clergymen were often the only educated men, and frequently held seats of government power (see: Theocracy). Anyone disobeying the edicts of the church were branded heretics and persecuted.

In modern times, a religious elite still exists in the Pope and the Vatican Assembly. The Pope is elected by the College of Cardinals, while the cardinals themselves are appointed by prior papal decrees. Once elected, the Pope is in "office" for the remainder of his life (unless he resigns).

Some elite groups speak a language that is not shared by the commonality: in Tsarist Russia and in Vietnam, the elite spoke French, in the Philippines the elite spoke, and in many cases still speak, Spanish. In Plantagenet England, the elite spoke Anglo-Norman, while Finland was ruled by a Swedish-speaking elite up to the beginning of the 20th century and in Ptolemaic Egypt the elite spoke Koine Greek. In ancient India, Sanskrit was spoken by the elite class.

Even when the elite nominally speak the same language as the majority, their dialect and accent may have a higher status. Their usage may be reflected in "prescriptive" dictionaries; common usage is reflected in "descriptive" dictionaries. For example, in the 1950s, the British elite spoke what linguists of the time called U English or Received Standard English (RSE).

Elites may also establish cultural canons, which are more widely agreed-upon within the elite and more generally ignored or resented among the non-elite.

It can be argued that English is becoming the global elitist language of today, since understanding it opens the door to many lucrative jobs in business and communicaitons. However, others claim that the use of English is an uncontroversial issue and that the linguistic elitists are actually more concerned with shutting out local variations (such as Indian English, or Afro-American English) than with the language itself. 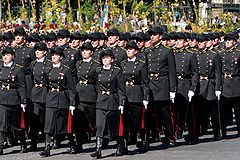 Students of the École Polytechnique - an elite institution that has provided generals, scientists, engineers, civil servants, industrialists and politicians in the service of the French state

Societies educate elites to govern.[dubious – discuss] While conventional education often aims to produce knowledgeable and skilled citizens, the elitist approach to education is geared towards producing leaders of some sort. It can be idealized as an education geared to producing an individual capable of thinking at a sophisticated intellectual level more advanced than the general population, consisting of diverse philosophical ideals and theories in order to rationalize the status quo.

In some systems, such as that of the scholar-bureaucrats who administered China for 1300 years, elite education selects and skims off the most able students regardless of class or financial background. To pass Imperial examinations, students had to be versed in the Confucian classics and neo-Confucian commentaries, in literature and fine calligraphy - creating a cohesive and socially homogeneous scholar-gentry. This system co-opted into its service those who would have potentially been the most dangerous to the state; it left would-be malcontents either leaderless or uneducated. As an avenue to political power, the examination system became increasingly corrupted, with political connections and loyalty to the regime becoming as important as outright ability. The cultural legacy of this policy survives as of 2011[update] in the selection for the elite Chinese universities. Elite universities, through a process of indoctrination of a common heritage, ethos and promise of preferred advancement, create a loyal administrative/ruling elite for the service of the state. Such a system of selection for elite education can operate in the Western tradition as well, for example in France's Grandes écoles.

A military elite is a unit of soldiers or recruits picked for their competence and put in a special elite unit. Elite units enjoy some benefits as compared to other units, at least in the form of higher status, but often also higher pay and better equipment. Examples of military elites includes Napoleon's Imperial Guard, Nazi Germany's SS as well the various special forces of today.

Elitism is the belief or attitude that some individuals, who form an elite, are those whose views on a matter are to be taken the most seriously or carry the most weight; whose views and/or actions are most likely to be constructive to society as a whole; or whose extraordinary skills, abilities or wisdom render them especially fit to govern.[1]