Frank "Frankie" Baldwin was the father of factory owner Mike Baldwin, and was played by actor . Baldwin was a former docker and wideboy, more so than his son. He was present on the Street between December 1980 and January 1982. He conned barman out of money over a wedding video scam, and conning Gee a second time also managed to con out of money. The police turned up accusing Gee of distributing blue movies.

In 1981, after repaying his debts to Fred and Alf, he turned up at son Mike's flat with wads of cash and a blond women on his arm, claiming she was his secretary. Late that year, the blonde returned to to visit family and Mike asked her to accompany him on a business dinner. Some days later Frankie turned up and got the wrong idea about his son and the girl, so he stormed back to London. He was never seen again on the Street as he had died off screen in July 1982.

Suzie Birchall was played by actress from January 1977 to December 1979 and then again in 1983. Suzie was a free-spirited teenager who was more interested in having fun than personal responsibility. She made fast friends with and roomed with her at 's house. Her first storyline involved her getting her foot stuck through 's ceiling. Her father Bob was a control freak and he showed up in the Street to take her back home. When he tried to take her by force, Steve Fisher intervened, getting a punch in the face before Bob washed his hands of his daughter and drove off alone. She later kept company with a and found fleeting romance, which was her ticket out of the Street. She returned briefly to steal Gail's husband away, but was promptly chased away by her former mentor Elsie.

Alan Bradley was played by . He was famous for being a , first moving into the Street in 1986 to find his daughter, , who had run away after her mother had been hit and killed by a car. After that, he tried to trick , to whom there was an on-again, off-again attachment, into marrying him.

In 1988, he stole the s from Rita's house, and impersonated her dead husband so he could mortgage her house. In 1989, he tried to kill her, and at the conclusion of his trial, his resulted in his walking free that very day. He famously met his end after being hit and killed by a Blackpool tram. 26.93 million viewers watched the character meet his untimely demise in 1989. As of 2005, it it the 9th most-watched UK broadcast of all time. [cite news|title= The biggest TV audience ever ... it is now|author=Tapper, James |url=http://www.dailymail.co.uk/pages/live/articles/showbiz/showbiznews.html?in_article_id=346942&in_page_id=1773|publisher=""|date=1 May 2005|accessdate=2007-09-05]

The first episode of series 2 of contains a visual reference to the death of Alan Bradley, where flowers with a sign 'In Memory Of Alan' are tied to a lamp-post beside the tram line.

Bellinda "Linda" Cheveski (nee Tanner) was played by actress from 1960 to 1984. Linda had a hard edge and often butted heads with her brother and mother but deeply cared about them both. She returned to the Street early in the show's run, having separated from her husband Ivan. They reconciled and she gave birth to a son. By the end of 1961 they'd moved to , but she returned for periodic appearances. Her last appearance was to close up Elsie's house after her mother had abruptly left town. Linda's marriage was over and she made a pass at , who knocked her back.

Fred Gee was played by from 1975 to 1984. Fred was a relatively unpleasant and unsympathetic character who arrived in "Coronation Street" in 1975. Played by he remained as an employee at the until he was fired by Billy Walker in 1984. Fred Gee got through two wives during his time - Edna () and Eunice ().

Fred was first introduced into "Coronation Street" in 1975 after his wife Edna died in a warehouse fire. Shortly after, , landlady of the Rovers Return was ordered by the brewery to take on a resident cellar man after the pub had been broken into. Annie was instantly impressed by the quietly spoken, dapper Fred with his olde worlde charm and impeccable manners. This, like so much else of Fred, was just a front to cover his true self, idle, ignorant and coarse. In 1976 he briefly had a fling with and brought her back to the Rovers to have afternoon tea with !. Fred was unlikeable and devious, and often did things for the sheer devilment, such as tossing bread on top of dustcart to attract pigeons in order to ruin his chances of winning the "Best Kept Dust-Cart" competition. Despite the fact that he liked to think he was in charge of the pub, Annie dominated him, ridiculed him and did nothing to hide her contempt for him. In 1999, returned for a brief time and announced that Fred had died of a heart attack previously.

Dudley "Trevor" Ogden was played by , first appearing in May 1964 when his parents Stan and moved to Coronation Street. He appeared on the street until January 1965. He appeared again in 1967 helping with his band. He was declared missing in 1972 when Hilda was trying to contact him. He was not tracked down until 1978(played by ) now (to Hilda's surprise) married to a women called Polly with two children ,4 and ,2. He had told Polly that Hilda, Stan and Irma where dead when they met in 1973 and they had married a year later. He came to live in a flat around the corner from the street where died in 1971 with Polly and the kids in 1979. He moved away again in 1980, but returned in 1984 for his father's funeral.

Beattie Pearson was played by . Beattie was first seen in "" in 1961 visiting her father, . Beattie's visits were quite rare usually coming to the street when she wanted something, she attended the wedding of & in 1962 and also Val's funeral in 1971. She moved in with Albert for a few weeks when she left her husband, Norman, but Albert soon sent her back. In 1975 she along with the rest of the Street attended Albert's 80th Birthday street party. In 1981 on another visit to Beattie was afraid that she would have to have Albert live with her because Ken & Deirdre Barlow were thinking of leaving the Street, but she was glad when they decided to stay. Beattie's last appearance was when died in 1984, Beattie gave Ken his World War one medal, saying that Albert always looked upon him as a son. 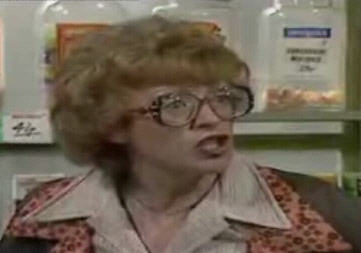 Irene "Renee" Roberts (née Bradshaw) was played by actress . Renee, a feisty young woman, bought the corner shop from and caused problems in the street by refusing long-standing customers 'tick' (credit) and fighting local landlady in order to obtain a licence to sell drink.

Renee was essentially a lonely woman. She hadn't really bought the shop out of any genuine desire to make money, more to provide a stable environment for her wayward brother Terry, who had never been able to settle down after leaving the army. Renee was hurt when he re-enlisted, feeling her kindness had been thrown back in her face. Alone at the shop, she grew increasingly close to post office employee . Despite seeming a very odd couple indeed, they married in 1978.

Producer decided that Renee must be written out, and she was killed when her car was hit by a lorry, having stalled at a red light in a country lane. Although paramedics tried to save her at the scene of the accident, she died shortly afterwards, her spleen perforated by shards of flying glass.

Albert Tatlock was played by actor from 1960 to 1984. The character became something of an institution, so much so that grumpy old men were sometimes nicknamed "Albert Tatlock".Fact|date=July 2008 Albert Tatlock originally lived alone in No. 1 Coronation Street; his wife Bessie had died some years before. Albert had a daughter, Beattie, but she was sent away to during the War and she resented having to come back to Manchester, so she was never close to Albert or Bessie again.

In 1961, his niece Valerie came to town to live with him. Val fell in love with and they later married. Ken and Val lived in a separate house on the Street until her death from plugging in a faulty hairdryer in 1971. It was at this time that he bought No. 1 from Albert, paid off all his outstanding debts, and had Albert live with him.

At one time, Albert considered marriage to local pensioner , but after a while they both realised the relationship would not work, as they were both too set in their ways.

Ken was very protective of Albert and eventually started calling him "Uncle Albert," as Val had. Albert continued to live with Ken while he courted and eventually married , even though Janet didn't care for Albert and wished he would live somewhere else. All round, Janet made Albert unhappy most of the time and Ken's decision to kick Janet out was partly based on Albert's unhappiness.

In the early 1980s, Ken married , whom he had courted for some time. Albert approved of Deirdre and was glad that Ken had finally chosen a woman as worthy of his hand in marriage as his niece was. Albert lived with Ken and Deirdre until his death of a heart attack while reading the newspaper in 1984, at the age of 88. This occurred offscreen while Albert was staying with his daughter. By this time, he was one of only two surviving members of the original cast.

Herbert Harrison "Bert" Tilsley was played by . He was the first husband of and the father of . Bert died in 1984 of a heart attack while in hospital, following a nervous breakdown. 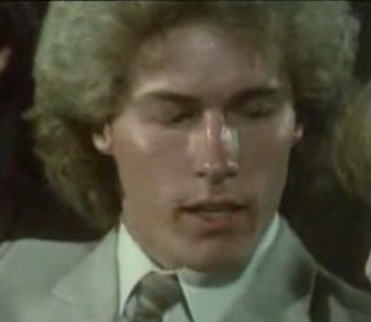 Brian John Tilsley was played by . He married Gail Potter in 1979 and had two children with her: Nick, born in 1980, and Sarah Louise, in 1987. Gail had been sleeping with both Brian and his cousin Ian Latimer at the time, so questions were raised as to whether Brian was Sarah's real father, although a blood test later revealed he was, he still refused to have anything to do with the baby, it was only after he kidnapped Nick that he decided to reconcille with Gail. Brian's mother, Ivy, had always believed that Ian was Sarah's real father.

Brian and Gail divorced, but got back together for the sake of their children and re-married in February 1988. But the re-marriage turned sour, and on 15 February 1989, Brian was tragically stabbed while protecting a woman from some youths outside a nightclub. His son Nick was deeply affected by his death, and when he grew older he was shocked by an accidental meeting with the man who killed his father. Sarah, on the other hand, considers her adopted father to be her father as she has no memory of her real father, also when Gail talks about Brian to Sarah, she rarely refers to him as "your father", Sarah on the other hand rarely mentions Brian, except childishly when once during an argument with Martin when she said that Brian was her real father and that Martin was not, However, it has been noted by Gail on several occasions that Martin was a better father and has done more for Sarah than Brian would have ever, or could have, done. Brian also would have never approved of Sarah having Bethany, where Martin was supportive, even sacrificing his own happiness to put her first.

Gloria Todd was played by between 1985 and 1988. She famously served as a bridesmaid at 's 1987 wedding to , looking not dissimilar to a milking maid. Gloria was unlucky in love, at one point having a daliance with . She left the street following an argument with Rovers Return cleaner . Gloria had been a barmaid at the .