Moshing is a dance in which participants push and/or slam into each other. They also flail their limbs to breakdowns of hardcore punk and its sub-genres. It is most associated with aggressive music genres, such as hardcore punk and heavy metal. It is primarily done to live music, although it can be done to recorded music.[1]

In the 2000s, many variations of moshing exist, such as thrashing,[2] or the more extreme Wall of Death, and are typically done in an area in front of the stage which is referred to as the mosh pit or simply pit, though many mosh pits have been known to occur elsewhere, most notably the middle. In the Wall of Death, participants are directed away from the center of the standing area by a member of the band until a large, rectangular area is cleared, and, upon the band beginning the next song; the two sides perpendicular to the stage sprint at each other and collide in the middle.

While moshing is seen as a form of positive feedback or expression of enjoyment,[1][3] it has also drawn criticism over its dangerous nature. Injuries and a few deaths have been reported. However, it is generally agreed that moshers are not trying to harm one another,[1] and that they follow an unwritten "moshing etiquette".[2][4][5]

The term mosh came into use in the early 1980s American hardcore punk scene in Washington, D.C. Early on, the dance was frequently spelled mash in fanzines and record liner notes, but pronounced mosh, as in the 1982 song "Total Mash" by the D.C.-based hardcore band Scream. H.R. of the band Bad Brains, regarded as a band that "put moshing on the map,"[6] used the term mash in lyrics and in concert stage banter to both incite and to describe the aggressive and often violent dancing of the scene. To "mash it up" was to go wild with the frenzy of the music. Due to his Jamaican-accented pronunciation of the word, fans heard this as mosh instead.[7]

By the 1980s, the term was appearing in print with its current spelling. By the time thrash metal band Anthrax used the term in their song "Caught in a Mosh",[8] the word was already a mainstay of hardcore and thrash scenes. Through the mainstream success of bands like Anthrax, Nirvana and The Melvins, the term came into the popular vernacular.

Moshing has became very popular in the "Club" scene and is used mainly in teenage clubs in the UK. It may also be referred to as "stomping" or "raving" and each are referring to the bouncing motion, gained from the euphoric style of music, usually to the beat of the bass or beat of a music, and most modern songs have a climax moment where the dancer waits at a beat free moment of the song, and explodes with energy after the tense build up to "mosh" with others.

Slam dancing, a precursor to moshing, can be traced back to 1970s punk rock shows in the form of the pogo.[2] The slam dance during the first wave of American and British punk in 1977 was characterized by stage dives, frenetic jumping, and chaotic motion to match the music. Similarly, practitioners of the pogo would jump up and down wildly to the music, bouncing off and into one another, though staying mostly in place. The pogo and slam dance were both a part of the punk movement at this time, and converged into a more violent and extreme form, moshing, as the first wave of punk died out and gave way to the hardcore punk subculture that emerged in the late 1970s and early 1980s.[5][9] 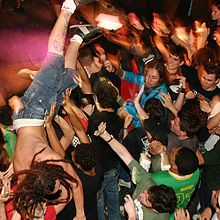 Crowdsurfing over a mosh pit.

The first dance identifiable as moshing may have originated in Orange County, California, during the first wave of American hardcore.[10] Examples of this early moshing can be seen in the documentaries Another State of Mind, Urban Struggle, The Decline of Western Civilization, and American Hardcore, as well as footage from the shows of the era.

Amidst the burgeoning hardcore scene at the time, the dance was initially referred to simply as slam dancing, and was characterized by "strutting around in a circle, swinging your arms around and hitting everyone within your reach."[11] But these circular, rhythmic motions soon came to be known by Los Angeles and Southern California area hardcore participants as the "Huntington Beach Strut" (or "HB Strut"), after the city in Orange County where this particular style originated. Author Steven Blush writes:

This more violent version was soon exported to the San Francisco and Bay Area punk scene, where pogoing was still the prevalent form of dance. From there, it spread to the east coast of the United States through touring hardcore musicians such as Bad Brains, Henry Rollins and Ian MacKaye, who witnessed the HB Strut while traveling.[13] Slam dancing also became popular in the burgeoning crossover thrash scene.

By the end of the 1980s, the initial wave of American hardcore punk had waned and split into other subgenres. The Seattle-based grunge movement was among the many styles of music that directly evolved from hardcore. Through the mainstream success of several grunge bands, the word mosh entered the popular North American vocabulary and the dance spread to many other music genres. According to John Linnell of They Might Be Giants, "it didn’t matter what kind of music you were playing or what kind of band you were; everybody moshed to everything. It was just kind of the enforced rule of going to concerts."[14]

Hardcore Dancing is a form of aggressive dancing in a circular pit similar to a mosh pit but has significant differences. It's existence is most prominent in post-punk, metalcore, and deathcore culture, as well as in many of their sub-genres and sub-cultures. Hardcore dancing is usually headbanging, pogo (dance), windmills, karate kicks etc. The dance move of a windmill consists of the dancer flailing his/her arms in a circular motion similar to a windmill. Karate kick is a move that is used when the dancer kicks forward, similar to that of someone who might practice karate, as high as they can and comes down. Then the repeat this step almost immediately on the opposite leg they landed on. Other moves, as well as variations of flips are also common. Many members of the immediate crowd outside a hardcore dancing pit will push moshers towards the middle of the pit to keep the pit from expanding and/or protect themselves. Observers are also known to put their hand out in the form of a fist as a means to back them away or as a signal to back away (it is common mosher etiquette to move away when hitting someone whose arm is extended).

Despite the widely known "moshing etiquette" which most moshers and hardcore dancers abide by, the aggresive nature of hardcore dancing or mosh pits can also lead to fights due to people commonly being accidentally hit by other moshers, whether or not the person is moshing. Due to this, some venues (though not many) that host hardcore events ban hardcore dancing and or moshing at their establishments. 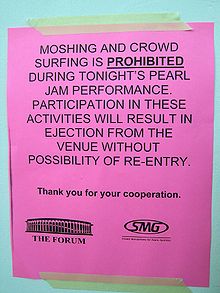 This notice at a Pearl Jam concert in Los Angeles prohibits moshing and crowd surfing.

Among the first musicians to criticize moshing publicly was Ian MacKaye, frontman of Minor Threat, founder of Dischord Records and early promoter of the straight edge lifestyle. Beginning in the late 1980s during his time in Fugazi, MacKaye became well known for his opposition to "violent dancing" at shows (despite having done so during Fear's Halloween 1981 performance on Saturday Night Live).

Consolidated, an industrial dance group of the 1990s, stood against moshing. On their third album, Play More Music, Consolidated included the song The Men's Movement, which proclaimed the inappropriate nature of slam dancing. The song consisted of audio recordings during concerts from the audience and members of Consolidated, arguing about moshing.

In the 1990s, The Smashing Pumpkins took a stance against moshing, following some especially tragic incidents. At a 1996 Pumpkins concert in Dublin, Ireland, 17-year-old Bernadette O'Brien was crushed by moshing crowd members and later died in the hospital, despite warnings from the band that people were getting hurt.[15] At another concert, singer Billy Corgan said to the audience:

At The Drive-In began to speak out against slam dancing at their shows, and their frontman Cedric became known for his anti-moshing speech at Big Day Out 2001 in which he bleated at the crowd as if they were sheep.[16] Later that day, Jessica Michalik was crushed in the mosh pit, which caused her to die five days later, of asphyxiation. The coroner criticized the crowd control measures in use at the time, and also criticized Limp Bizkit lead singer Fred Durst for "alarming and inflammatory" comments during the rescue effort.[17]

Another fan died at a Smashing Pumpkins concert in Vancouver, British Columbia, Canada on September 24, 2007. The 20-year-old male was dragged out of the mosh pit, unconscious, to be pronounced dead at a hospital after first-aid specialists attempted to save him.[18][19][20]

At the Columbus, Ohio stop of Gigantour 2006, Lamb of God lead singer Randy Blythe chastised the crowd for moshing after someone was hurt in the mosh pit, commenting that: "The world looks at a show like this and thinks we are just a bunch of violent motherfuckers who try to hurt each other. Well, that's not what we are about. Next time someone hits the ground, pick them up or I will stop the band."

Mike Portnoy, founder and ex-drummer of Dream Theater, criticized moshing in an interview published on his website:

Groove metal group Five Finger Death Punch had an incident when, during the last song of a concert, a young man received a compound fracture on his ankle in a mosh pit. Ivan Moody, the band's lead singer, leaped into the crowd with Zoltan Bathory, the band's lead guitarist, and carried the injured fan onto the stage, where he was taken to the hospital. Moody stated "I've felt bad because of what has happened. I miss the old Pantera kids who would just throw each other. Just respect other people; come on." Bathory stated: "Because he broke his leg I threw down my guitar. We just finished when he broke his leg, and I came out and I stayed with him until the paramedics picked him up. These are my people and that's how it is."

UK punk band Hacksaw came out against moshing after an incident at a 2006 gig caused several fans to suffer serious injuries. This resulted in a song on their 2007 album, Vote Hacksaw, titled "Amateurs In The Pit", wherein they condemn all moshers as "brain dead morons who wanna stamp on kiddies".

Joey DeMaio of American heavy metal band Manowar has been known to temporarily stop concerts upon seeing moshing and crowd surfing, claiming it is dangerous to other fans. [22] [23]